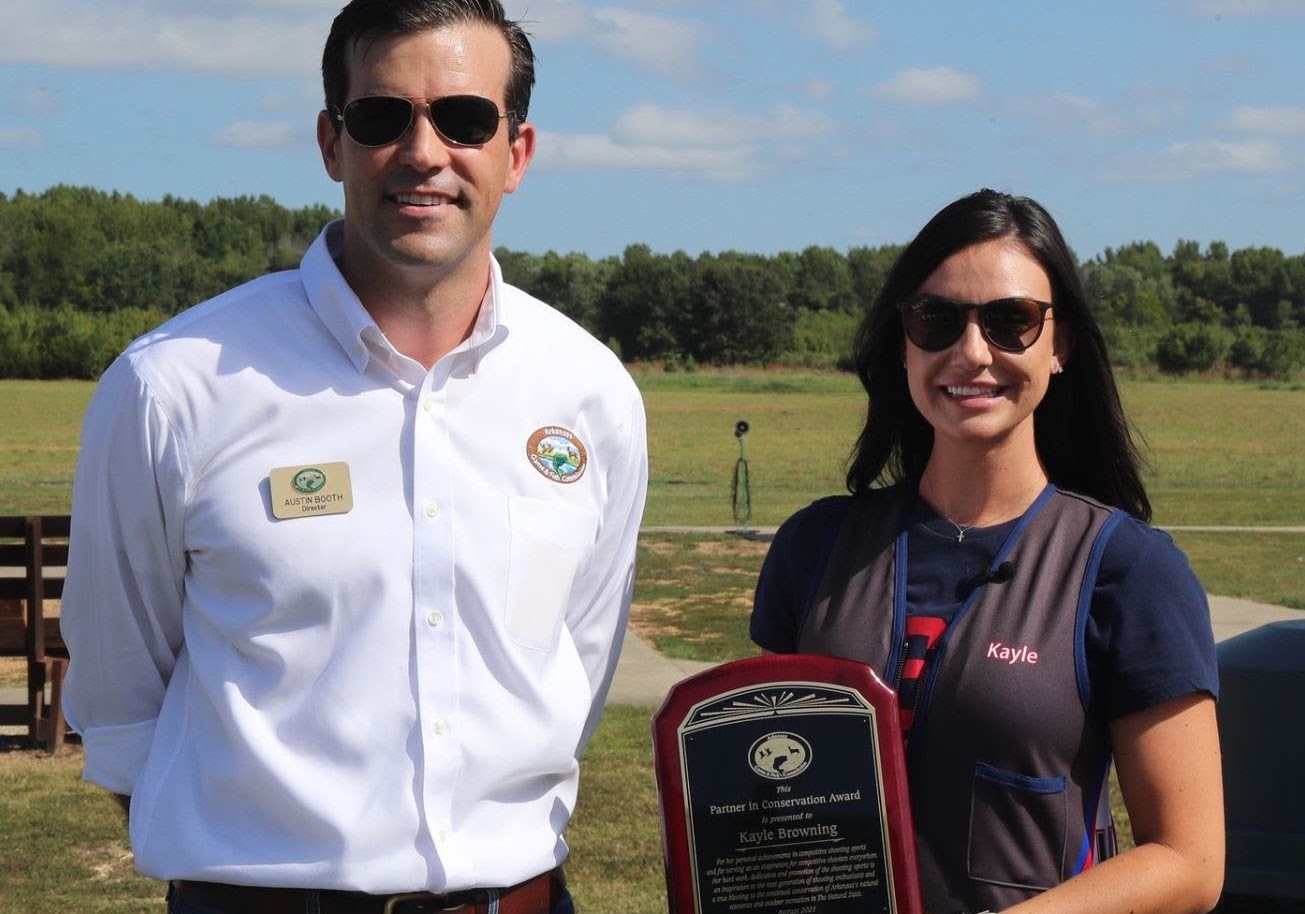 JACKSONVILLE — The 2020 Olympic Games in Tokyo may be over, but Arkansas’s own Kayle Browning is still making an impact in her home state. The Greenbrier native who took a silver medal in international trapshooting was honored at a special ceremony today at the Arkansas Game and Fish Foundation Jacksonville Shooting Sports Complex and worked with budding shooting sports enthusiasts in a special shooting clinic presented by the Arkansas Game and Fish Commission.

AGFC Director Austin Booth presented a Partner in Conservation Award to Browning on behalf of the Commission, and Deke Whitbeck, president of the AGFF, presented Browning a Lifetime Hunting and Fishing Sportsman’s Permit for her efforts in promoting shooting sports and women in outdoor recreation.

Following the award presentation, Browning spoke about her journey to become an Olympian with Trey Reid, host of Arkansas Wildlife, the AGFC’s official television show.

“I love any sort of wingshooting,” Browning said. “With duck hunting, you get to watch the dogs work and it’s just a great experience. And dove is delicious; it’s probably my favorite wild game to eat.”

After the interview, Browning, who is a shooting instructor at Cypress Creek Shooting Lodge in Greenbrier, worked with five female competitors from this year’s Arkansas Youth Shooting Sports Program to offer tips on their shooting and boost their confidence in outdoor recreation. Improvements to their shooting were almost immediately noticeable to the parents and people in attendance.

Browning, who was introduced to shooting by her father at the age of eight, shot competitively for the better part of the last two decades, including participation in the AGFC’s Youth Shooting Sports Program when it was established during her high-school career.

The targets and atmosphere Browning tackled at the Tokyo Olympic Games were much different than those she handled during AYSSP tournaments, where she dominated competitions during her high school days. Targets fly nearly 20 mph faster than those that flew from the trap house at today’s event.

Browning said the silver medal has been the high point of her shooting career so far, but she looks forward to continuing her journey and hopefully representing TeamUSA in Paris in 2024.

“There’s still that gold title floating around out there,” Browning laughed. “So we’ll see.”