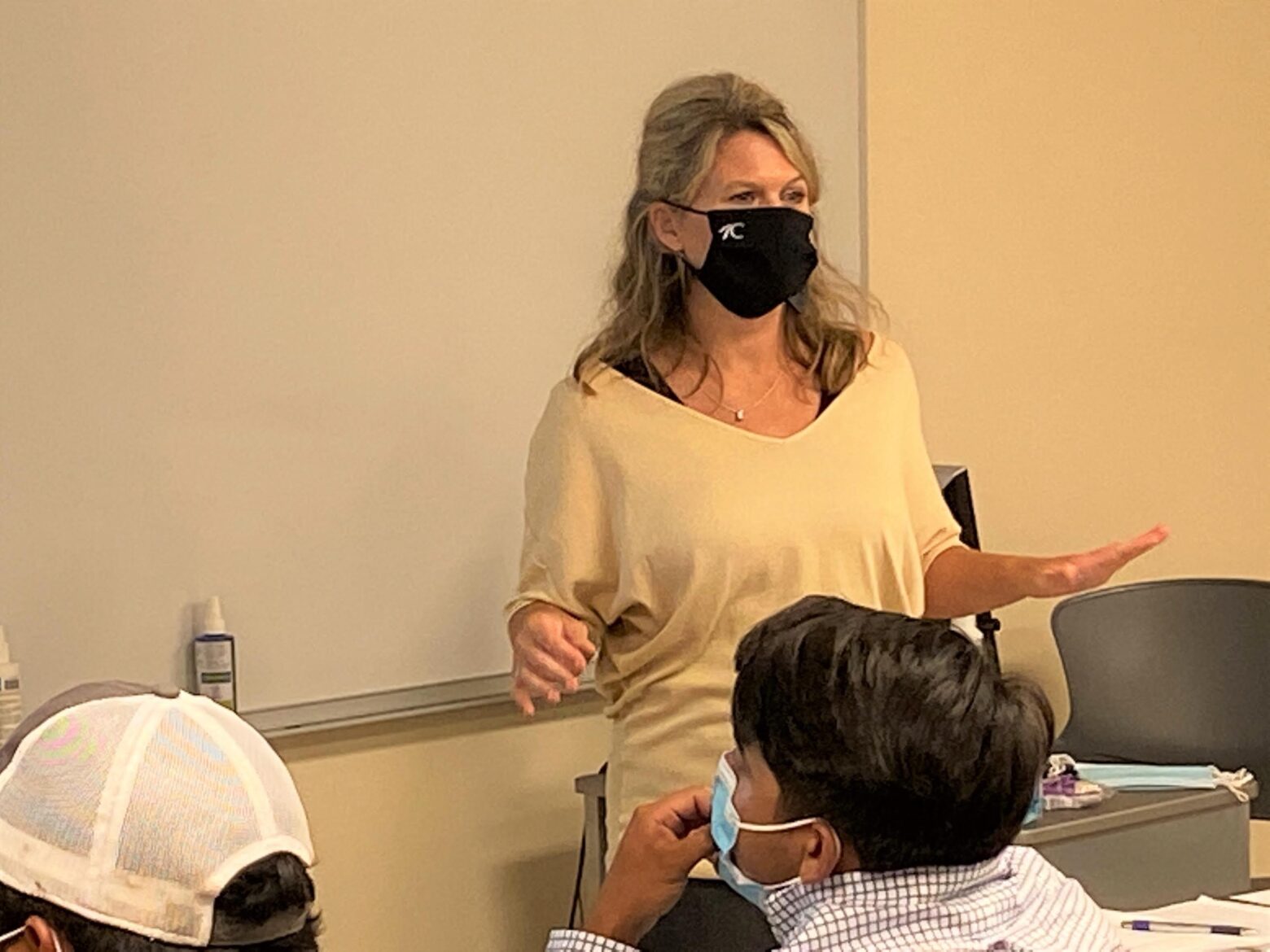 MONTICELLO, Arkansas – It’s been more than a decade since Lonni Davis taught in a classroom environment. In that time, many things have changed, but one thing hasn’t: identifying the students’ goals and helping them succeed.

Davis began her teaching career at the high school level. Now a decade later, she embarks on a new adventure. Davis has joined the faculty at the University at Arkansas at Monticello in the College of Forestry, Agriculture and Natural Resources (CFANR). She began this fall, working with a gamut of age groups ranging from freshman to seniors. Davis said, “This semester, I am teaching Forage Crops, Ag Orientation, Ag Seminar, and assisting Dr. Francis in Soils Lab and Precision Ag Lab. The Orientation Class is a freshman-level introduction to agriculture that fosters a sense of getting involved on campus at UAM and developing an understanding of the multi-faceted career opportunities available in Arkansas agriculture. The Seminar class is required for all Agriculture seniors; we focus on their final research papers, oral presentations, resume building, and mock interviews.”

Davis is one of seven new faculty members at CFANR. “So far, all is good at CFANR. It’s been a few years since I’ve been in the classroom, but I have really enjoyed getting back into the swing of things and starting to get to know our students here at UAM. I’ve been lucky here with my orientation class and forage class, both being in auditoriums. Having the extra space is nice for both the students and me to be able to spread out,” said Davis.

For Davis, the return to UAM is a homecoming of sorts. She graduated from the college with a BS degree in Agriculture, emphasizing animal science (2000). She later attended the University of Arkansas in Fayetteville, where she got her Master of Science degree in General Agriculture (2003) As if this isn’t enough, she is busy being a mom to her three children, the youngest of which is now 13 years old.

After graduation from the U of A, she needed a job. From 2000 to 2007, she taught Agriculture and Biology at Crossett High School. She was also a National FFA Organization adviser assisting students with their livestock competitions and leadership camps. With family demand requiring more of her time, Davis said finding balance was a necessity. The agriculture and livestock events were eating up too much time and competed with being a mother. In 2007 she found more traditional employment that fit in with her family schedule. Davis changed jobs from 2007 to 2010 and worked at Hamburg High School teaching General Chemistry, Physics and Environmental Science.

In 2006, Davis and her husband, Brad, decided to make a professional pivot. They planted Leland Cypress Christmas Trees. Four years later, in 2010, they harvested their first three or four Christmas trees, and the Old Milo Tree Farms and Pumpkin Patch was in business. Davis is the owner and operator of the farm. Soon it expanded by adding a small petting zoo, field trips for schools, and a hayride. The business was booming. The pumpkin patch was filled with school-age children who were the focus during the week, while the tree farm remained open for families on the weekend to pick a pumpkin or choose and cut a Christmas tree. Eventually, the farm added pre-cut trees, North Carolina Fraser Firs from a family farm. Davis said some people just prefer that kind of tree, and they can’t be grown in Arkansas.

Davis says the Milo Tree Farm and Pumpkin Patch averaged 7,000 visitors a year, with 2 to 4 school field trips daily. Then in 2020, CoVid 19 hit and schools shut down their school field trips, and people became nervous about going out in public. Davis said that while the school trips were eliminated, the outdoor setting made it the perfect venue for families to get out of the house and do something. Davis said, “Things are crazy busy right now trying to get ready for the Old Milo Pumpkin Patch to open in October. We will be open every weekend in October and can’t wait for some fall weather.” Davis said she, her husband, and children run the farm. Since the 2020 season was hampered, this fall will mark a tenth anniversary for the farm.

When she isn’t at the farm, the balance of Davis’ time during the week is spent teaching at UAM. “I’m excited to be back at UAM and look forward to getting to know the students in the agriculture department, what their goals are, and how I can help them be successful,” said Davis.