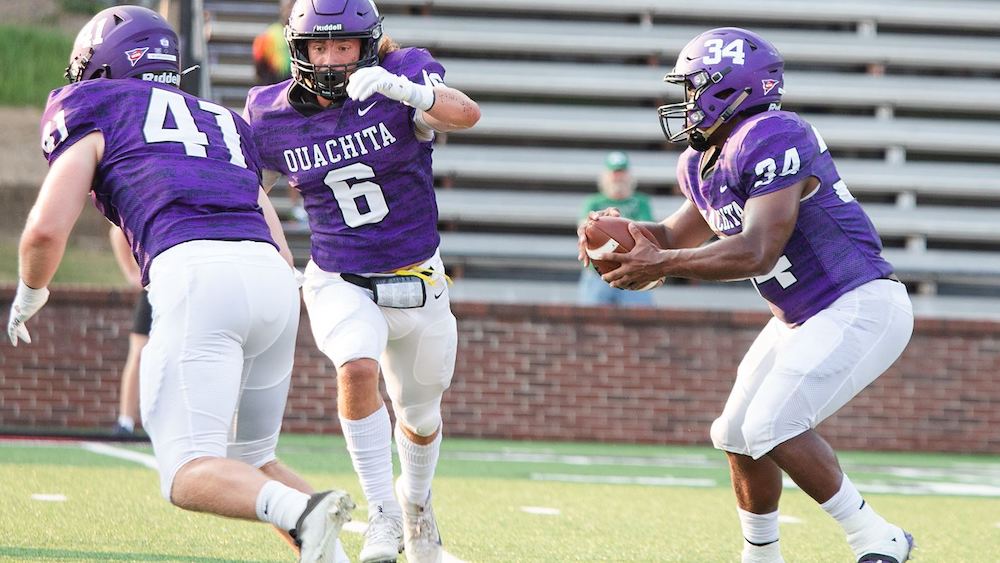 ARKADELPHIA – The Ouachita Baptist University football team secured its 30th consecutive conference victory on Saturday at home by a final score of 38-24 over Arkansas Tech.

Saturday’s game began with figurative and literal lightning. Two plays into the contest, the Tigers gave the home crowd a burst of energy with a 50-yard pass play from quarterback Grant Allen to TJ Cole, most of those yards coming after the catch. Immediately following that big play, the game was interrupted with a lightning delay that lasted approximately 80 minutes.

After the delay, the Tigers (3-0) reached the scoreboard first at the 12:25 mark of the first quarter on a three-yard touchdown run by TJ Cole to cap a six-play, 74-yard drive. That score and extra point put Ouachita up 7-0.

The Tigers regained the lead at the 3:04 mark of the first quarter with Cole’s second rushing touchdown of the game, this time from eight yards out to cap an eight-play, 70-yard drive.

Gabe Goodman put the Tigers up 17-7 with a 27-yard field goal early in the second quarter to cap a nine-play, 82-yard drive.

Kendel Givens turned in his third consecutive three touchdown game, and punched in his first score right before halftime from seven yards out to put the Tigers up 24-7 at the break.

Givens opened the second-half scoring with his second score, this time from three yards out to cap an 11-play, 75-yard drive to put Ouachita up 31-7 with 6:33 remaining in the third quarter.

The Wonder Boys answered back with a pair of scores – a nine-yard touchdown pass with 2:37 remaining in the third and a 34-yard field goal with 12:04 remaining in the fourth. Those scores cut Ouachita’s lead down to 31-17.

Givens scored Ouachita’s final points of the game with a 10-yard score to cap an eight-play, 48-yard drive with 7:14 remaining in the game.

ATU punched in the final score on a touchdown run with 1:18 remaining in regulation.

The Tigers look to keep the streak going next Saturday, September 25 on the road against Harding. Kickoff is 6 p.m. in Searcy.