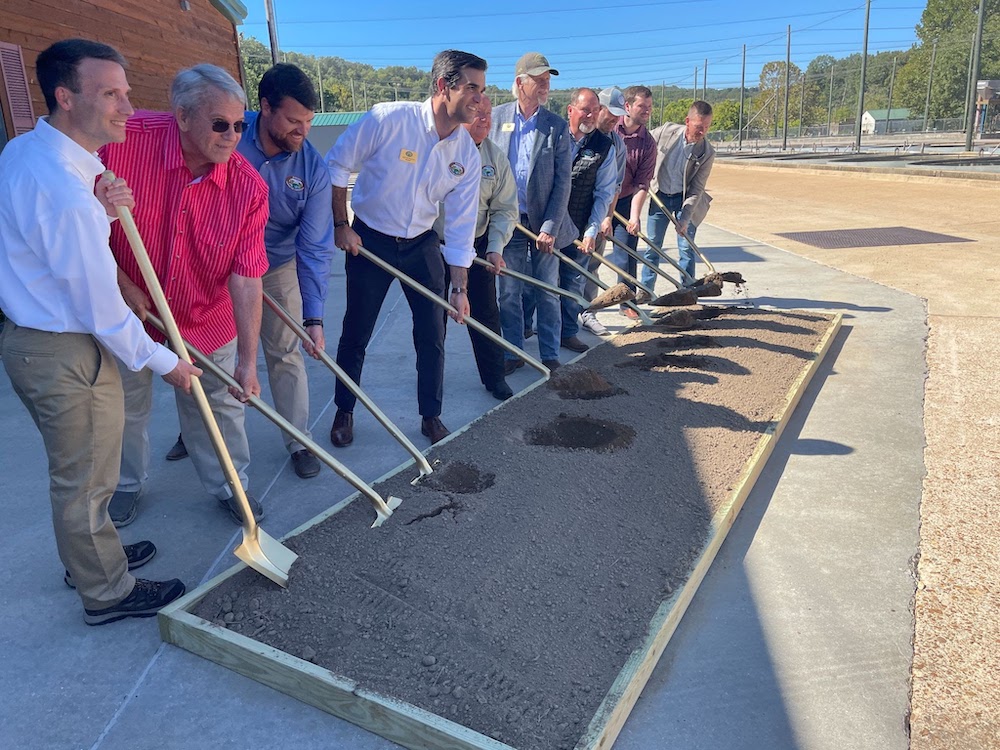 MAMMOTH SPRING — Arkansas Game and Fish Commissioners yesterday celebrated a successful partnership with trout anglers to begin a major renovation to the Jim Hinkle Spring River Fish Hatchery today in Fulton County. The hatchery is the only state-owned fish hatchery in Arkansas devoted to the production of trout.

The hatchery, which was originally built in 1974 and was donated to the AGFC by the Kroger Company in 1985, draws cold water from the Spring River and uses large metal silos placed into the ground as growing tanks for cold-water trout species. Eggs, which are primarily supplied through the federal trout hatcheries, are hatched at the facility and the fingerlings are placed into the tanks and cared for until they are about 18 months old.

According to AGFC Director Austin Booth, trout from the hatchery provide fishing opportunities for a much larger area than the Spring River.

“Fish from this hatchery not only go to 140 miles of trout tailwater,” Booth said. “They also go into 42 locations around the state for little boys and little girls to fish in ponds in their communities and catch beautiful trout.”

The hatchery once was able to supply up to half of the 2 million rainbow trout stocked annually in the state, with the remaining trout coming from the federal hatcheries. But after 46 years and two recent flood events, the hatchery has seen extensive wear. While regular maintenance and a renovation on the dam that controls water going into the hatchery has kept much of the infrastructure operational, many larger components, including the facility’s metal silos are in need of replacement. This wear on equipment has reduced the productivity of the hatchery to half of what it historically produced.

AGFC Assistant Hatchery Manager B.J. Vandiver said some of the metal silos had to be taken completely out of production for safety concerns to hatchery staff.

“The metal has corroded over the years so much that we were seeing holes form in the sides of the tanks,” Vandiver said. “When we harvest trout, we have to climb down in the tanks, and you could see where some of the metal was beginning to buckle and groundwater from around the tank was seeping back in. We just had to take them offline.”

The renovation will replace those old metal silos with round concrete tanks which should last much longer.

“We have concrete raceways here as well, and we originally wanted to just add more of those in place of the silos,” Vandiver said. ”After a trip to a Wyoming hatchery that used the round concrete tanks, we saw that it was a better design.”

Water supply and discharge systems also will be remodeled to use water more efficiently and promote a cleaner environment for the fish with less need for hand-cleaning. An ultraviolet treatment system also will enhance the hatchery’s ability to combat any waterborne pathogens, such as infectious pancreatic necrosis, which was detected at the hatchery five years ago. Once complete, the hatchery should be able to regain its former production levels of 1 million trout per year.

Thanks to the support of trout anglers, guides and local stakeholders, the AGFC was able to make a small increase in the price of trout stamps in 2019. That increase has so far generated an additional $2.06 million toward the renovation. This is enough to provide almost one-third of the project’s total projected cost. The additional funds needed for the projected $6.7 million renovation was approved by the Commission at its July meeting, drawn from the agency’s Stability and Enhancement Fund for the much-needed repairs.

During his address at the ground-breaking ceremony, AGFC Chairman Bobby Martin spoke of the importance of trout fishing to not only the anglers who pursue them but also to the economies of cities and towns throughout north Arkansas. According to Martin, more than $180 million is generated annually to the economies of towns near Arkansas’s famous trout-fishing destinations, with much of that revenue coming from residents of other states who support guides, restaurants, hotels, gas stations and many other businesses while enjoying a fishing trip.

“If you’re a trout angler, this place is on your bucket list,” Martin said. “We’re very proud to be here today and make this announcement that we know will benefit not only the anglers, but the people of Arkansas.”