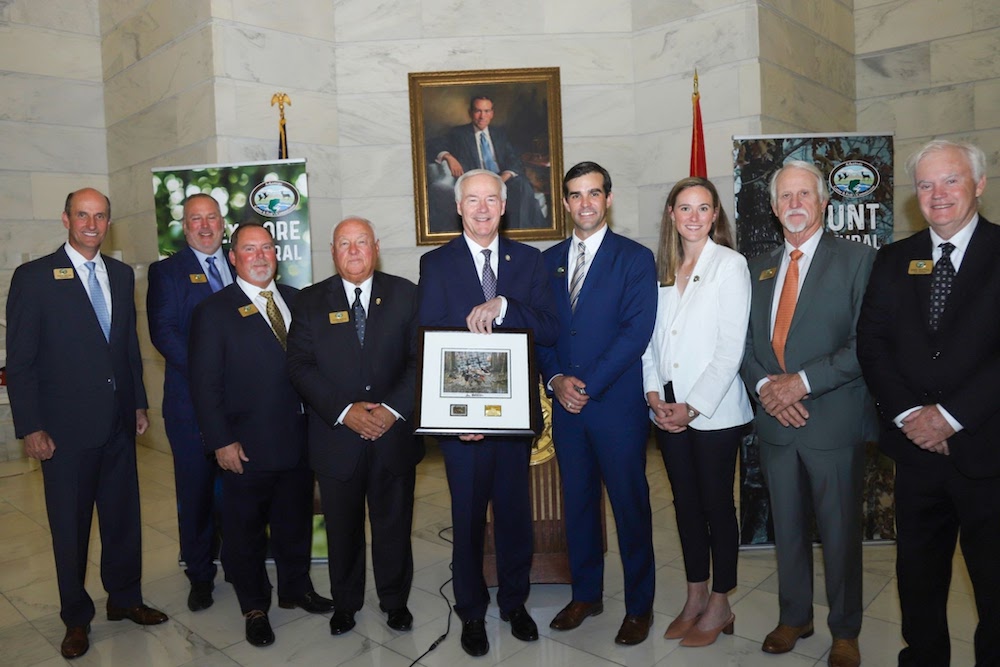 LITTLE ROCK — Gov. Asa Hutchinson unveiled the artwork that will appear on the 2021-22 Arkansas State Duck Stamp today at his official proclamation of Sept. 25 as National Hunting and Fishing Day in Arkansas and the week leading up to it as Arkansas Hunting and Fishing Week. The proclamation, which took place at the Arkansas State Capitol Rotunda, signifies the importance of hunting, fishing and outdoors recreation to The Natural State.

“It’s probably one of the joys that I have no doubt as governor is to be able to join in this celebration of what we have inherited here in the state of Arkansas,” Hutchinson said. “Our hunters and anglers appreciate what nature has given to us and the blessings that God has given to the state of Arkansas with bountiful wildlife and beautiful outdoors. We enjoy that and want to make sure that the next generation enjoys that as well.”

Artist Jim Hautman’s image of a Laborador retriever holding a mallard in flooded timber, which is featured on the stamp, is a fitting testament to the picture of conservation in Arkansas. As Arkansas Game and Fish Commission Director Austin Booth said in his introduction of today’s press conference, hunting and fishing are entwined in the North American model of conservation, not only through funding conservation efforts, but also in the management of wildlife habitat on private land and participation in the ethical, sportsmanlike harvest of wildlife.

“Outdoor recreation of which hunting and fishing is a tremendous part brings roughly 9.6 billion dollars in economic impact to our state and over 96,000 jobs,” Booth said. “It is well known that whether it’s ducks or deer or turkey or the health of our waters, hunters and anglers fundamentally are the most important conservationists that we have. Hunting and fishing are not just important to our economy and to the resource, but to the character of what it means to be an Arkansan.”

Now in its 50th year, National Hunting and Fishing Day is the largest, most effective grassroots movement ever undertaken to promote outdoor sports and conservation. Celebrated on the fourth Saturday of September, the federally recognized holiday brings together sportsmen and women from across America to celebrate the rich tradition of hunting, sport shooting and fishing through organized local, state and national events aimed at introducing new audiences to the outdoors.

A video of today’s press conference is available at https://www.youtube.com/watch?v=YzD9EmwT5R4.