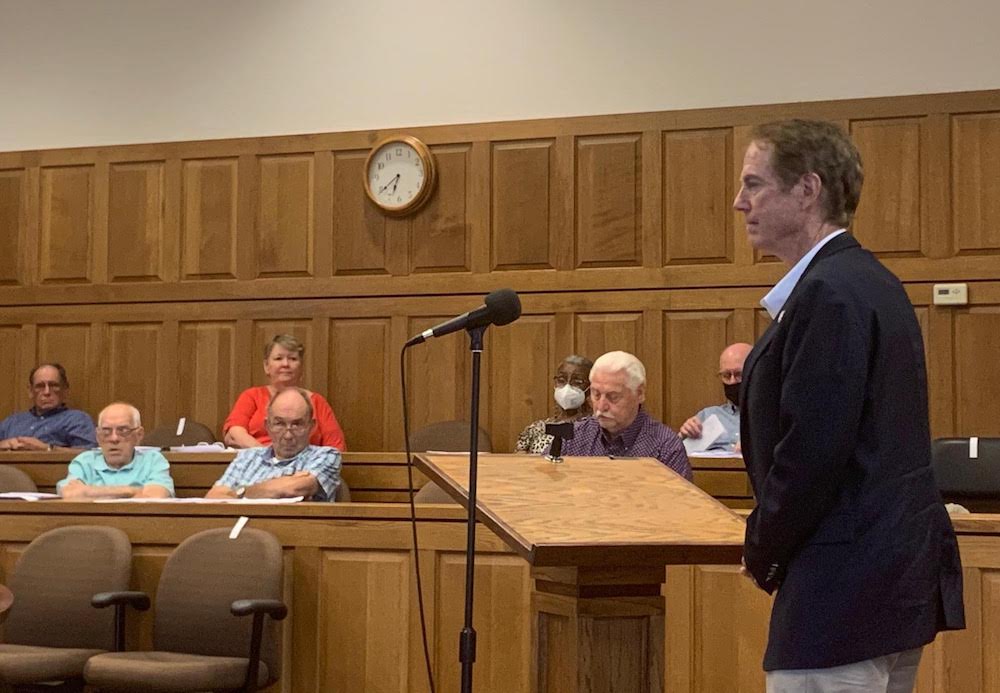 The project underway for some five years to build a private prison in Southeast Arkansas to house 500 State of Arkansas inmates and to provide jail space for Bradley and Drew Counties is in jeopardy of being canceled.

Billy McConnell, a high ranking officer of LaSalle Corrections, a private firm that operates prisons and jails which had signed a contract over a year ago with Bradley and Drew Counties to construct a multi-million dollar facility to house State and local prisoners for a fee, spoke to the Bradley County Quorum Court Monday evening, September 20 at the Bradley County Court House.

To the knowledge of salineriverchronicle.com, there was no requirement for the housing of federal inmates, although there was no prohibition of doing so.

For over a year there has been little, if any, communication concerning the status of beginning construction. Bradley County Justices of the Peace have been asking for information. Monday evening, members of the senior management of LaSalle attended the Quorum Court meeting and informed the Court that the contracts were not feasible. The reason given was that costs have skyrocketed and federal inmates would be required to make the project financially workable. An executive order has been issued prohibiting the federal government from utilizing private companies from housing federal prisoners. This was announced in early 2021 but had been discussed as far back as 2020. LaSalle stated they thought they might be grandfathered in, but did not have a federal contract in place.

Monday evening, the company suggested that Bradley County consider issuing a revenue bond issue in the range of 34 million dollars to build, own and operate the prison as a public facility, which would make them eligible for federal prisoners. It was stated there is no guarantee federal prisoners could be secured, but it was a possibility. LaSalle then offered to work as a consultant with the County in operating the prison.

The result of such action by the Quorum Court would mean Bradley County would own the prison, operate it through the Sheriff’s Office, and all employees would be County employees. There would be no private financing or private legal management. The County would be liable for all lawsuits. It should be noted this is a completely different approach from the plan as approved by the Court.

Quorum Court members asked several questions. Justice Eddie Wayne Parnell said he does not trust the federal government, and nearly all of the JPs voiced concern about the County owning and financing the facility. None of the Justices proposed a course of action and ultimately voted to table the matter for future action.

They talked about the need to get out of the current contract before making any other decision and the need for much more detailed information on a bond issue. Revenue bonds would not require a public vote, but the County would be responsible for the payments on the 34 million dollar bond.

Warren Mayor Denisa Pennington was in attendance. She declined to speak.

Dr. Bob Smalling, Chairman of the Board of the Bradley County Economic Development Commission was also present. He urged the Court to approve a bond issue and go forward with the prison. He stated that the important issue was jobs. He said he had rather see some private industrial jobs in Warren, but that was not going to happen. He went on to say that our people are capable of working at prisons. Dr. Smalling made a comment that Monticello would try to get the prison located in Drew County.

Over the course of the last two years, the land in the Warren Industrial Park was given to LaSalle by the City of Warren for location of the prison, and the 40,000 square foot spec building was given to LaSalle by the BCEDC. LaSalle then got rid of the spec building, having it removed from the site. The building was originally paid for by the City using sales tax funds. It was not stated what happens to the land or value of the building if the prison does not go forward on the site.

In other business, the Court approved the normal reports and adopted two ordinances. Ordinance #762 was approved committing the County to follow all audit procedures utilizing American rescue plan funds. Ordnance #763 set up funding for COVID premium pay for employees. The Court then approved the transfer of lost revenue from federal funding in the amount of $37,900.00.

Judge McKinney announced the County has received a grant of $2.9 million to expand broadband in a large portion of the County. South Arkansas Telephone Company will partner with the County to install the lines.

The Judge also reported he is catching a good deal of flack concerning the Counties decision to halt commercial garbage pickup and have businesses in the County responsible for hiring the collection be done by private firms. Several Justices indicated they too, were hearing from constituents. The Judge stated the matter would be further discussed.