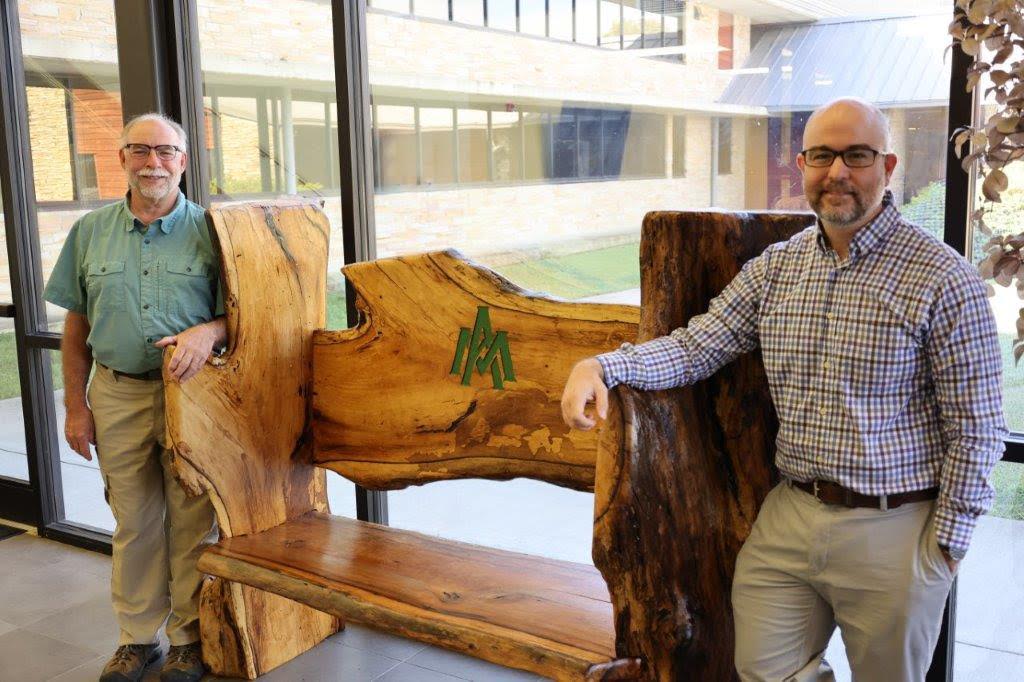 MONTICELLO, Ark. — A craftsman’s regret over an unfulfilled promise has given the remains of a one-time state and national champion persimmon tree from Dardanelle a new life at the College of Forestry, Agriculture and Natural Resources on the University of Arkansas at Monticello campus.

The native persimmon tree, Diospyros virginiana, usually grows from 30 to 70 feet and ranges from Connecticut in the north, Iowa and Texas to the west and south to Florida. Female trees bear sweet edible fruits. Male trees, like Dardanelle’s champion, bear no fruit.

The former state and national champion persimmon tree once graced a residential property in Dardanelle. It stood 96 feet high, with a crown spread of 73 feet and a circumference of 151 inches. According to Urban Forestry Partnership Coordinator Harold Fisher, it was named national champ in 1987, six years after being nominated.

Dardanelle carries the Tree City USA designation and is home to many trees of distinction, including the state champion black hickory, which was the persimmons’ neighbor, as well as the champion northern catalpa, white oak, and cottonwood trees.

Craftsman George Rheinhardt of Adona, Arkansas, said he’d heard that the property owner feared that the old, rotted-from-the-inside behemoth would fall on her house or her grandchildren. It was determined that the city actually owned the tree and agreed to remove it. According to the Arkansas Department of Agriculture, Forestry Division, the tree was removed by the city of Dardanelle on March 15 or 16, 2016.

Wayne Shewmake of Dardanelle, past president of the Arkansas Wildlife Federation,

was responsible for getting the city designated as a “Tree City USA” through the Arbor Day Program. “When we found out about the tree’s removal,” he said, “I was mad, so I quit the Arbor Day program for the city. I called the forest commission and told them what had happened. They came up and grabbed some tree pieces to make bowls and ‘cookies'”, which are cross-sections sliced from a tree stem.

“The local forestry people would occasionally drive by to look at it,” said Rheinhardt. “One day, they drove by, and there was a stump; it was gone. They about had a heart attack.”

“Nobody had ever told them about the tree being cut,” he said. “Turns out the tree did have a lot of rot in it and actually became a hazard.”

The remains of champion persimmon were taken to the refuse center, slated to be ground into mulch.

It wasn’t long before Rheinhardt and his son, John Henry, were in their truck on their way to the dump to find the champion among all of the other discarded trees and shrubs. Rheinhardt said he and his son found the pile of persimmon logs and dragged them out in pieces.

Over the years, Rheinhardt had developed a reputation for the benches he would craft, using cherry, walnut, catalpa, and pine. Some of his benches have sold for thousands of dollars at auction.

About four years ago, Phil Tappe asked Rheinhardt to make a bench. At the time, Tappe was dean of the College of Forestry, Agriculture and Natural Resources as well as director of the Arkansas Forest Resources center for the University of Arkansas System Division of Agriculture. He retired in 2020.

Tappe returned to the forestry building on Monday and saw the bench for the first time, and sat on the six-foot piece of furniture to make sure he would fit. “Originally saw a bench that George had worked on at a Forestry Association meeting or Log a Load event. He has done several benches over the years. “I was impressed with his workmanship, and we had recently built our new facilities. I thought something like that would look great; I kept bugging George,” said Tappe.

Tappe would continue to drop subtle hints over the years. He figured Rheinhardt was waiting for that special tree to make a bench for the college.” George has always been a great supporter of the college. Whether it be helping our teaching program or research projects, he’s always been there,” said Tappe

“I told Phil I would make him a bench. I got the idea that if I were going to build one for the School of Forestry, wouldn’t it be better if they had one from the national champion persimmon tree,” Reinhardt said, adding that in the years since making that promise, he felt bad at never having fulfilled it.

“This kind of craftsmanship takes time. Even though it’s been a while since we talked about it, it’s OK”! Tappe said with a chuckle.

Persimmon isn’t the easiest wood to work with. It’s extremely hard, which made it a popular choice for golf club driver heads before that job was replaced by today’s metal and composites. And while bench-building is typically a straightforward process, the tree’s rot made his work even more difficult, with Reinhardt having to fit the old tree’s pieces together.

“Had it not been a national champion tree, I would never have used this wood,” he said, adding with a laugh, “this wood has character.”

Still, Reinhardt had enough to make not just one bench, but two. One went to UAM, and the other went to a charity called Log A Load for Kids. The UAM bench has the university’s green logo carved into the backboard, and it was created in a way that retains the tree’s natural curves and grain. The bench now sits in the lobby of the George Clippert Annex of the College of Forestry, Agriculture, and Natural Resources building.

The current champion persimmon stands in Fayetteville’s Wilson Park, a mere 69 feet tall, with a 34-foot wide crown and a trunk circumference of 64 inches.

About the College of Forestry, Agriculture and Natural Resources and the Arkansas Forest Resources Center

The University of Arkansas at Monticello and the University of Arkansas System Division of Agriculture offer all of their programs to all eligible persons without regard to race, color, sex, gender identity, sexual orientation, national origin, religion, age, disability, marital or veteran status, genetic information, or any other legally protected status, and are Affirmative Action/Equal Opportunity Employers.

Top Photo: UAM College of Forestry, Agriculture and Natural Resources Dean, Dr. Phillip Tappe (retired), and Current dean, Michael Blazier, welcomes the 6-foot custom bench made of the national champion persimmon tree.  Due to rot, the tree was cut in 2016 in Dardanelle, Arkansas.