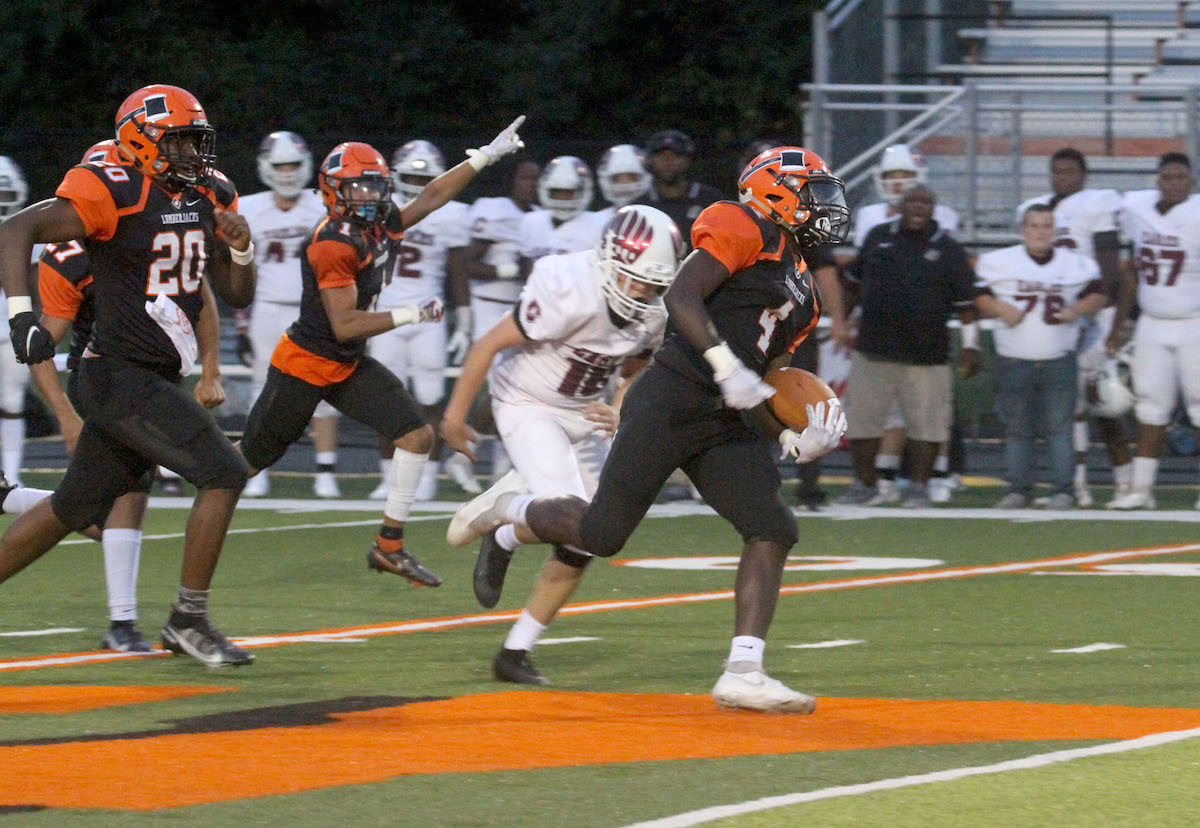 Big games require big players step up. Step up is exactly what Warren did Friday night, September 24, 2021, as the Lumberjacks fought off a very talented Crossett Eagles team by the final of 40-34 to move to 3-1 overall and 1-0 in 8-4A Conference play.

This was the 63rd known meeting between Warren and Crossett on the football field, with the first game dating back 113 years to 1908, just three years after the founding of Warren’s football program in 1905. Two storied timber communities with a rich tradition of a storied rivalry, each looking to get the 2021 conference season off on a solid foot. In reality, these two teams would each be a good bet to be fighting for the 8-4A conference title come late this season.

The magnitude of this ballgame in particular was not lost on statewide media, as even Hooten’s was there covering the event. Both schools filled their bleachers at Jim Hurley, Jr. Stadium in Warren. The atmosphere before kickoff was electric.

Warren elected to receive the opening kickoff after winning the toss. Crossett booted the opening ball deep to Jacari Lee, who fielded the ball at the 10-yard line. Lee made a short few trots forward, patiently found a seam, and then shifted into a gear that would have made even the Millennium Falcon jealous. His 90 yard bolt left Crossett stunned and set the tone for Warren’s approach the rest of the night. Attack! Jose Jacinto knocked through the extra point to put Warren up 7-0 very early in the first quarter.

Crossett came back on their opening offensive drive, putting together three solid runs for a first down into Warren territory. They capped off their first possession by busting a run out left for a 17 yard rushing touchdown. The Eagles went for two and converted, taking their first lead of the evening at 8-7 with 9:05 left in the quarter.

On the ensuing kickoff, Crossett attempted an onside, presumably to keep the ball out of the hands of Mr. Speed, Jacari Lee. Probably a wise call. Warren’s sophomore receiver and defensive back Eli Densmore was there to haul it in to set the Jacks up with nice field position.

Warren marched deep into Eagle territory, but a holding penalty and some solid Crossett defense brought up a fourth down and goal situation from the 18-yard line with 4:37 to go in the first. Coach Bo Hembree elected to send the offense back onto the field to try for six points. Senior quarterback Riley Cornish calmly dropped back and delivered a beautifully weighted pass to the corner where Jarard Payne grabbed it for another Warren touchdown. Jacinto’s extra point was good. Warren led 14-8 late in the first.

Crossett’s offense struggled to move the ball on their second drive, as Warren’s Delfino Rivera made a tackle on the first play for a three yard loss. Safety Lee Johnson knocked down a deep pass on second down, and the Jacks forced another incompletion on third down. The Eagles punted away. Jacari Lee returned the punt to the Crossett 45-yard line to again give Warren really nice filed position.

Lumberjack tailback Cedric Calbert picked up 8 yards on the ground on first down, then another 13 yards to put the Jacks near the redzone at the Crossett 24-yard line. With 1:28 to go in the quarter and the ball on the 6-yard line, Cornish brought Lee in motion, handed it off to the senior receiver, who whipped around the left side of the Eagle defensive and cruised into the end zone to put Warren up 21-8.

Warren’s defense would force a punt on Crossett’s next drive.

Deep into the second quarter, with the score still sitting at 21-8 Jacks, Warren was marching downfield hoping to extend their lead once more before the half. However, at the 2:40 mark, a Lumberjack fumble was recovered by Crossett, a play which really turned the game on its head.

Crossett put together a pass over the middle for 24 yards, a quarterback draw for 10, and suddenly found themselves at the Warren 4-yard line with just over 20 seconds remaining in the half. They dialed up a pass or run option for quarterback Tyrique Jones. He drifted wide right and found a gap, scoring with just 18 seconds left in the second quarter. The point after try was no good. Warren led 21-14 at the halftime break.

A Warren onside kick got us underway in the third, but Crossett recovered on their own 43-yard line. Their first play of the quarter was a stuffed run for a gain of under two yards. A couple of plays later on third down, Crossett hit a pass over the middle to reach Warren’s 23-yard line. A run up the middle would be enough to find the end zone, but their two point conversion was no good. Warren led 21-20 with 10:20 left in the third period.

Warren’s offense couldn’t get much rolling on their next possession. A pass completion from Cornish to Lassiter came up just shy of a first down, and the Jacks had to punt.

The defense for the orange and black pinned their ears back and went to work midway through the third. Crossett tried to go deep, but Jacari Lee was their to shut it down. Dakota Eyman made a tackle for a loss of three yards a play later. On third and seven, corner Treylon Jackson kept up with his man stride for stride, forcing yet another incompletion and a punt.

Warren’s late third quarter drive saw the Jacks bring Jackson in again at tailback to give Calbert a breather. After a short gain, the Lumberjacks faced another fourth down scenario with 5:35 left in the quarter. Maddox “Maddog” Lassiter went back to qb, running a power play and picking up a crucial Warren first down to the Crossett 46-yard line. The Lumberjacks found the end zone three minutes later as Lassiter plowed into pay dirt from two yards out. Jacinto hit the extra point to take Warren’s lead to 28-20.

Crossett wasted little time answering. They hit a touchdown pass over the middle on their following possession. They went for two, but couldn’t convert. Warren’s lead held at 28-26 going into the fourth quarter of action.

Cedric Calbert dealt a dagger on the first play of the fourth. Cornish handed the ball off to the Warren senior. He found a crease and dashed 40 yards for a touchdown. It was his longest run of the night. The extra point was no good. Warren led 34-26.

Credit to Crossett however, they simply wouldn’t go quietly. With 10:13 to go in the ballgame, they hit a 49 yard touchdown pass on fourth down, and after the two point conversion we are all level once again at 34-34.

Under ten minutes to play, Coach Hembree went back to Warren’s bread and butter, the run game. Calbert picked up nine yards on the next drive’s first play, then a first down. Faced with another fourth down situation, the “Maddog” package was called in. Lassiter pushed ahead, gaining enough for a new set of downs. Three plays later on third and seven, Cornish connected with Lassiter on an fullback out route for 16 yards and a first down to the Crossett 19. On second and 10, Calbert took a handoff and picked up 12, continuing his night of production. Lassiter finished up the drive with 3:07 to play in the fourth with a three yard rushing touchdown. Warren went for two to try and put the game to bed, but couldn’t find the end zone. Warren led 40-34.

The Jacks defense really stepped up on the final Crossett drive. Crossett’s dynamic quarterback Tyrique Jones scrambled on first down, but found no real room. On third and six from the Crossett 40-yard line, a deep pass was broken up by Treylon Jackson. After a holding penalty set the Eagles back for a fourth and 20, a completed pass on fourth down would come up a yard shy of moving the chains.

Warren took the ball after the turnover on downs and ran the clock out by kneeling. The Lumberjacks defeated Crossett by the final of 40-34.

Cedric Calbert earned AHF Products Lumberjack Player of the Game honors with 24 carries for 165 yards and a touchdown. It was so nice to see him get in a complete game performance under his belt.

Lassiter led the Jacks in receiving with three catches for 18 yards. Payne made two grabs for 38 yards, and Tayshawn Johnson had one catch for seven yards.

Lassiter also had one punt for 51 yards, a play that ended up being an impact play.

Treylon Jackson had three kickoff returns for 45 yards, his longest being for 22.

The Lumberjacks move to 3-1 overall, and have a good first step in the 8-4A with a 1-0 conference record. Warren hits the road next week, October 1, to face the Star City Bulldogs. Star City is coming off of a 10-0 win over Monticello.

For more photos from Robert Camp from the Warren vs. Crossett game, click here.