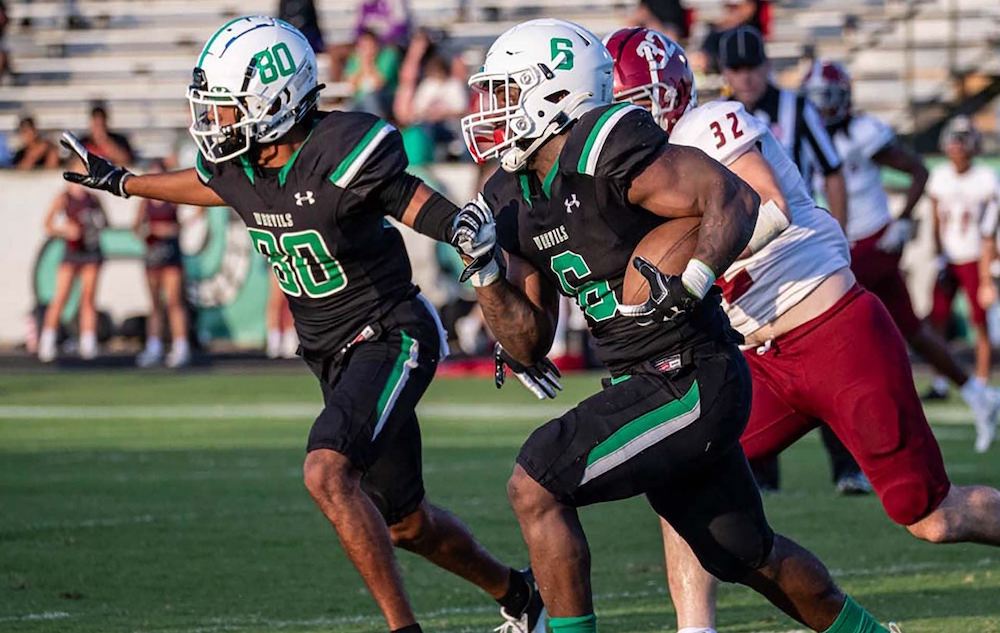 MONTICELLO, Ark. – The University of Arkansas at Monticello football team dropped its second-consecutive contest when the Weevils fell at home to #25 Henderson State Saturday. The UAM defense struggled to take away the big plays for the Reddies ultimately losing the game 58-18.

With the loss UAM falls to 1-2 on the season while HSU improves to 3-0.

The first half belonged to the Reddies as the Weevils surrendered 350 yards of offense and four touchdown in the opening 30 minutes. HSU was able to strike twice in the first quarter with a 46-yard touchdown on their opening drive and a 6-yard run to score on their very next possession.

In the second quarter UAM allowed the Reddies to find the end zone two more times as well as add a field goal. Following the first touchdown of the quarter Easton Seidl tried to bring a spark to the Weevils by getting his hand up to block the extra point. Unfortunately, UAM was unable to ignite any fire from that spark as the Reddies were able to march right down the field on their next drive to score again.

The Weevils responded with their best drive of the first rolling down the field in eight plays before Dorian Manuel scampered into the end zone for a 15-yard touchdown run. The extra point was blocked leaving UAM staring at a 27-6 deficit.

In the final two minutes of the half the Weevils and Reddies exchanged turnovers as Jonathan Scott picked off HSU, but two plays later Demilon Brown was intercepted with 47 seconds left. HSU was able to turn the turnover into points with a field goal as time expired leaving the Weevils to hit the locker room down 30-6.

UAM began the second half with a solid drive that unfortunately ended without points as the Weevils were stopped on fourth down just outside the red zone. HSU capitalized on the turnover on downs quickly when the Weevils surrendered another big scoring play on a 62-yard touchdown pass that made it 37-6 on the scoreboard.

The Weevil offense responded on their next drive as Brown and C.J. Parham connected for a four-yard touchdown. The two-point conversion attempt by UAM fell short making the score 37-12.

The big play struggles for the UAM defense struck again in the third quarter when the UAM deficit moved to 44-12 on a 58-yard touchdown pass by the Reddies.

Early in the fourth quarter Brown and Parham linked up again for the Weevils in the end zone – this time for a two-yard touchdown. Again UAM came up shy on the two-point conversion leaving the deficit at 44-18.

HSU ultimately found the end zone two more times in the final quarter as the Weevils eventually fell 58-18 for their first home loss of the season.

UAM out-gained the Reddies on the ground pounding the rock for 240 rushing yards in the contest. Devontae Dean posted the first 100-yard rushing game of the season for a Weevil with 118 yards on 21 carries. Brown followed with 55 yards on the ground while Manuel was the only one to find the end zone on the ground with one touchdown on three carries for 19 yards.

Brown and Parham were the best connection through the air for Weevils linking up for 46 yards and two scores. Parham finished with seven catches on nine targets. Brown completed 13-of-20 for 99 yards with two touchdowns and one interception.

Defensively for UAM, Damarous White and Kaytron Allen each registered double-digit tackles finishing with 10 apiece. Scott forced the lone turnover for the UAM defense with his first interception of the season in the second quarter.

The Weevils hit the road to face Arkansas Tech in Russellville, Ark. Saturday, Sept. 25. Kickoff is scheduled for 6 p.m.