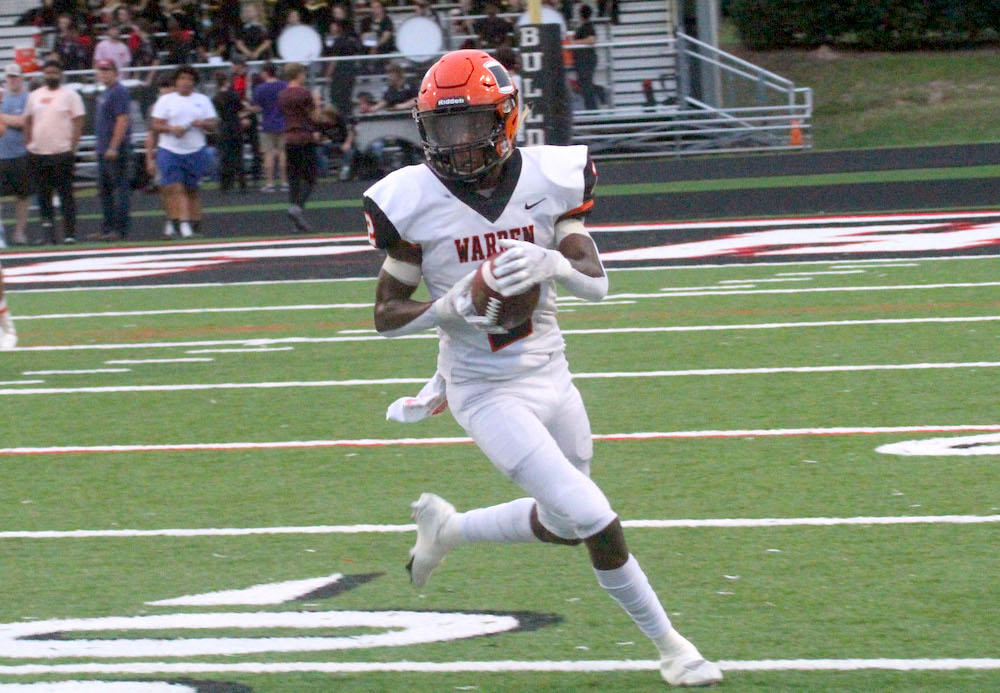 The 2021 Lumberjack Football season got off to a bit of a rocky start Friday night, September 3, as Warren dropped their season opener by the score of 35-0 to a very talented White Hall High team on the road.

After a pretty solid looking workout in last week’s scrimmage vs. the McGehee Owls, hopes were high for Coach Hembree and his 2021 band of players to take a swing at a skillful and deep rostered White Hall Bulldogs squad. However, the Jacks struggled to get the engines turning, particularly on the offensive side of the ball.

Warren won the toss and elected to receive the opening kickoff. Early in the first quarter, senior quarterback Riley Cornish connected with Jacari Lee on a bubble screen for seven yards. It looked as if Warren might be able to make something happen on the corners. A play later however, a Warren fumble was bounced around more times than an old Mazzio’s pinball machine between White Hall and Warren, finally coming into the hands of the initial fumbler Cedric Calbert. The loss on the play set Warren back almost 30 yards. That sort of set the tone for the remainder of the ballgame. Warren was forced to punt.

On White Hall’s opening drive, Jacari Lee and Landon Wolfe flushed the quarterback out of the pocket to his left. Wolfe would wrangle him in for a one yard loss. Seconds later, a White Hall pass over the middle was knocked down by Maddox “Mad Dog” Lassiter. Lassiter’s positioning all evening was on point.

Warren would hold White Hall and get the ball back with 7:22 left in the first. Moments later Cornish and Lassiter combined for a long distance pass and a gain of almost 50 yards. Warren was threatening deep into Bulldog territory when a slightly overthrown ball intended for Lassiter again was this time intercepted.

With the score at 0-0, Warren would contain White Hall on their ensuing drive.

Warren got the ball back with about three minutes left in the first, and Cornish hit Jarard “New Orleans” Payne for a big gain of 48 yards on a crossing route. However the orange and black could not capitalize, turning the ball over on downs.

White Hall broke the deadlock just after the start of the second quarter. A deep pass under the Warren defensive back’s coverage was hauled in for a touchdown. The extra point was good and White Hall took a 7-0 lead.

Tough running was the story of Warren’s following drive. With a struggling offensive game, Warren found a way to convert a 4th and short three times. Into White Hall territory, the drive puckered out. Cornish ran a nice quarterback read option, kept the ball and stretched out wide right hoping to make the sticks. He came up just shy and White Hall took over on downs.

With just under four minutes left in the second quarter, White Hall’s tailback rumbled downfield just beyond Warren’s defensive tackle. It looked as if he had the first down on a stretch, but the ball was jarred loose. Jacari Lee picked the ball up and nearly took it to the house for a touchdown. Stopped just short at the 12 yard line, the Jacks were unable to punch the ball into the end zone. The score remained 7-0 at the halftime break.

A manageable deficit began to slip away early in the third quarter as White Hall’s running game heated up. With 7:21 to go in the third, White Hall upped their lead to 14-0 through a 3 yard rushing touchdown.

Warren’s next drive was shot down as a Cornish’s pass was tipped and intercepted by the Bulldogs with 7:05 to go in the quarter. The Jack defense held strong as the Lumberjacks regathered possession from the home side.

Cedric Calbert gave the Warren crowd a scare with 4:40 left in the quarter when he went down with what appeared to be a knee injury of some kind. Everything Warren tried just felt out of kilter after the Calbert injury. White Hall punched another touchdown in late in the third to lead 20-0. The extra point was no good.

The following Warren drive again resulted in an interception after being tipped.

Into the fourth quarter, White Hall put two more touchdowns in the bag, plus a two-point conversion. They walked away with a 35-0 victory over the Warren Lumberjacks.

Jacari Lee led the Jacks in rushing with 4 carries for 29 yards. Cedric Calbert carried the ball 16 times for just 21 yards. It was Warren’s inability to get the run game off to a good start which hampered the passing game down the line.

The Lumberjacks finished the night with 43 rushing yards and 148 aerial yards for a total of 191 yards on the night. Warren turned the ball over 5 times through three interceptions and two fumbles.