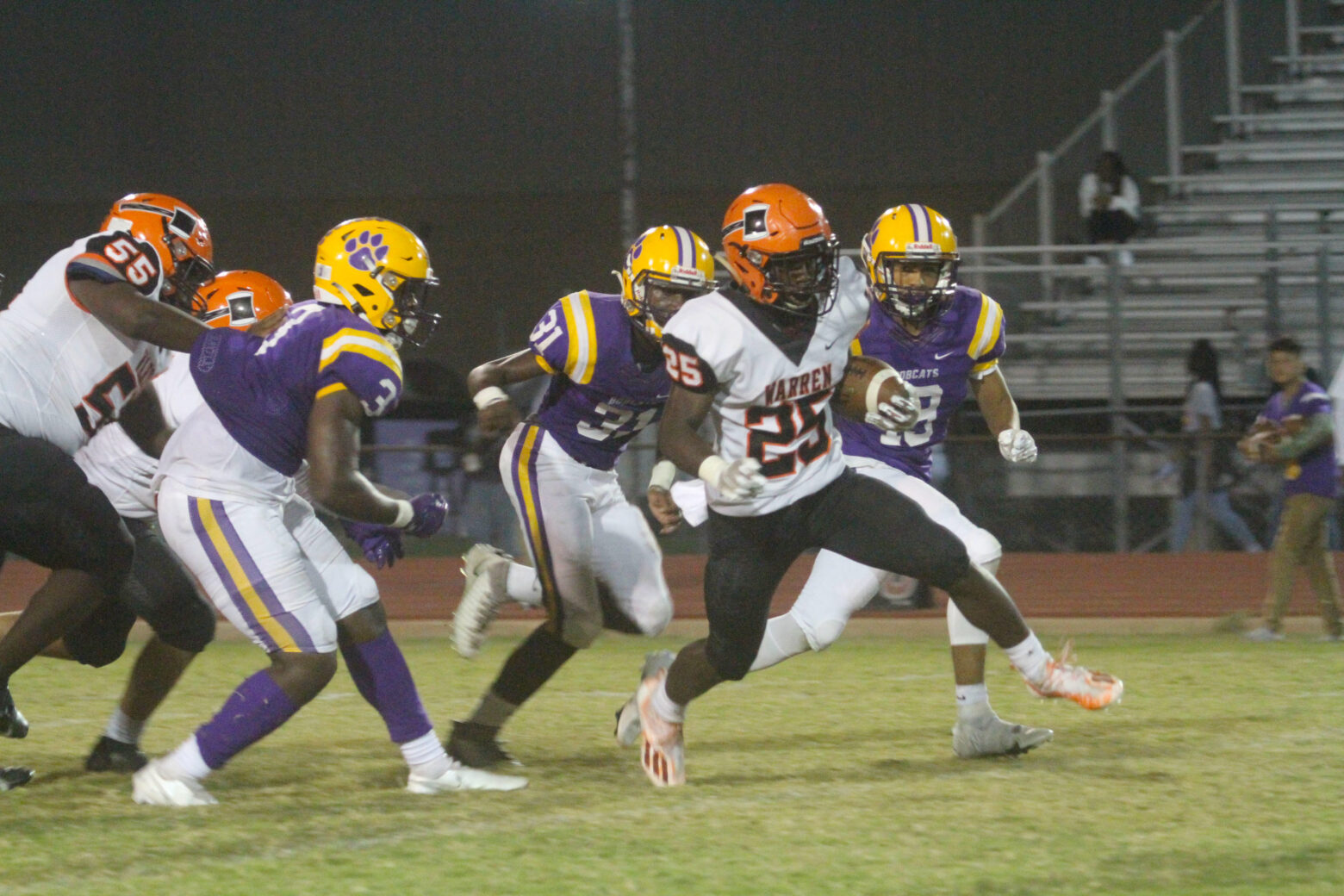 Continuing their quest for another 8-4A Conference Championship, the Warren Lumberjack Football team travelled 50 miles into the flatlands of the Arkansas delta, dealing the Dumas Bobcats at 51-14 loss Friday night, October 8, 2021.

Warren arrived at Tidwell Field in Dumas with a 4-1 overall record, having only lost to week one opponent White Hall. The Jacks were 2-0 in conference play prior to Friday night.

Dumas on the other hand were looking to bounce back after a tough conference defeat at the hands of Crossett last week by the final of 66-14. The Bobcats were hoping to knick an upset against Warren in the second of two games for the purple and yellow, which rounds out arguably the toughest two-game stretch for any single team in the 8-4A, having to face Crossett and Warren back-to-back.

Warren received some tough news during the week, as senior quarterback Riley Cornish was ruled out due to an injury. That meant more snaps at the helm of the Warren offense for Maddox “Maddog” Lassiter. Lassiter was an integral part of Warren’s success last season as he stepped in at quarterback for a large swath of the 2020 year in the absence of Cornish because of a knee injury.

Perhaps it was Lassiter’s prior season experience, as well as his numerous reps so far this season out of the “Maddog” package, that brought a sense of calm among this Warren team Friday night, on the road, at a place historically as difficult to play as Dumas. Although a blow losing Cornish for this week, it was reassuring to have a steady and experienced hand running that ever-potent Lumberjack offense.

Dumas received the opening kickoff, returning it to their own 37. On the first play from scrimmage, Warren’s Connor McDiarmid stuffed a gap and made the tackle to hold the Bobcats to a short gain on the play. A host of Jacks swarmed on second down, but a pass on third and seven was completed just shy of the first down marker. In a bold move, Dumas would go for the fourth down conversion. They squeezed past just enough real estate to pick up a first down and move the chains. The drive stalled however, and with 8:22 to go in the quarter, the Bobcats were forced to punt from their own 45.

With Cornish out and Lassiter’s Maddog package at the forefront, Warren went directly to their strength and hit the ground running. Within the first couple of plays, Warren’s Treylon Jackson quickly tallied 23 yards on just two runs. A steady dose of Jackson brought the Jacks to the Dumas 6-yard line. Fullback Landon Wolfe took over from there and plowed into the end zone at the 4:54 mark of the first quarter. Kicker Jose Jacinto’s extra point was good as the Lumberjacks took a 7-0 lead.

Jacinto then had one of his best kickoffs of the season thus far, booting the ball inside the five where it then rolled into the end zone for a touchback.

Dumas looked to answer quickly, but on their second offensive possession Warren’s defensive front was on the hunt. On second down, defensive end Landon Wolfe read a stretch play perfectly, flushed the play wide right and made the tackle himself, pulling the Bobcat tailback down behind the line-of-scrimmage for a loss. Dumas would go three and out and punt the football to the Warren 43-yard line.

The home team found some new life with 2:39 left in the opening quarter, as a Warren fumble was recovered by a Bobcat in a dangerous spot in Warren territory.

Dumas punished the Lumberjack mistake on the very next play with a deep pass over the middle for a touchdown. After the extra point, the teams were back all square at 7-7 with 2:22 left in the quarter.

On the ensuing kickoff, Dumas made a mistake of their own however, putting the ball in the hands of Warren’s Jarard “New Orleans” Payne. Payne hit a seam down the left side of the field, turned on his second stage boosters, and shot past the Dumas coverage, going the distance, 76 yards, and restoring Warren’s lead. Jacinto’s extra point was good and the Jacks led 14-7 with 2:11 left in the first quarter of action.

The situation went from bad to worse for Dumas on the next Warren kickoff. The Bobcat return man lost the football and Warren recovered near the Dumas 30-yard line. The Jacks drove it down to the Dumas 8 just before the first quarter expired.

After the teams flipped the field for the start of the second, the orange and black picked up right where they left off. Maddox Lassiter took a quarterback power straight up the gut and into the end zone for an 8 yard rushing score. Jacinto’s extra point was good to extend Warren’s lead to 21-7 with just five seconds gone in the second quarter.

The Bobcats refused to give in quite so early. They found some success of their next offensive drive. A short pass off the left edge was misread by the Warren secondary, which opened a big gap downfield. Dumas took advantage of the big play, moving the ball down to the Warren 9-yard line with 11:22 to go in the first half. Warren’s defense bowed up however. On the very next play, Dumas tested the Jacks through the air. Jarard Payne corralled the Bobcat receiver to the corner of the end zone and nearly came up with an interception, but the pass fell incomplete. On second down, Warren’s Aiden Weaver busted through the Dumas o-line, picking up a tackle for a loss. Dumas then went back to the air. This time they attacked the other side of the field. Warren’s Tayshawn Johnson was on the coverage and the ball fell to the ground incomplete to bring up a huge fourth and goal situation. Dropping back to pass, the Dumas quarterback fired a ball over the middle, but Jacari Lee jumped high and swatted the pass away with a powerful right hand to force the turnover on downs.

That turnover on downs seemed to be a real shift point in the game, with Dumas looking off pace the rest of the evening. Warren’s next offensive drive was methodical, going almost 80 yards, but coming up short of the end zone in the Dumas half of the field with 3:25 before the break.

The Bobcats, desperate to get something else on the board before the halftime whistle, went back to the air with 2:10 left in the quarter with a screen pass to the left. Rounding a receiver and robbing the screen was Warren linebacker Jalin Lee. He picked the pass off and sprinted 27 yards for a touchdown. After the interception, Jacinto knocked home the point after. Warren suddenly had an ever-growing comfortable lead.

Credit to Coach Hembree’s team. They could have taken their hands off the throttle to see out the second quarter, but instead they pushed for another nail in the Dumas coffin. With 1:12 remaining before the break, Lumberjack defensive back Lee Johnson undercut a downfield Bobcat pass on the next drive, intercepting it to give Warren a chance to once more extend the lead.

Lassiter saw to it that the interception wasn’t in vain. With just 58 seconds to go in the first half, “Maddog” landed a deep pass off the right side to Jacari Lee, who took it beautifully over his shoulder in stride for a 38 yard touchdown. The extra point was no good. Warren led 34-7 at the halftime intermission.

With the outcome pretty clear even at the midway point, Warren still looked to finish on a high note. They received the opening kickoff of the third quarter. A holding penalty sat them at a disadvantage early in the drive, but on third and 15, Jacari Lee took a handoff, this time from the tailback position, dancing his way for 13 yards, just two shy of a first down. On fourth and two, Jacari zoomed 56 yards for a Lumberjack touchdown, putting a big exclamation point on the certainty of the result. Coach Hembree elected to go for the two-point conversion to enact the sportsmanship rule, which means a continuously running clock. Lassiter ran it in from three yards out, and the mercy rule, as it’s more commonly known, was started.

Dumas continued to struggle offensively and were forced to punt deep in their own territory on the following drive with 4:46 to go in the third. However the snap to the punter was a good yard over his head. The ball tumbled out of the back of the end zone for a safety, giving two points to Warren and bumping up the Jack lead to 44-7.

After the safety, Dumas was forced to kickoff once again. Up and coming running back Matthew Powell entered the fray for the Lumberjacks on the next drive. He looked very lively, picking up nearly 20 yards on his first carry. Powell got the reward for his sharp running with 1:22 left in the third as he took a handoff up the middle for a 14 yard rushing touchdown. Eli Densmore came in and hammered through the extra point for the Jacks. Warren led 51-7.

Coach Hembree and his staff shuffled in big changes to the Warren team in the fourth, with a lot of younger talent coming on for some quality reps. Dumas did get a consolation touchdown with 6:56 left in the game, but the outcome was never in doubt. Warren’s Matthew Powell continued his impressive late game performance in the final minutes, picking up several first downs. Charles Coleman also made an appearance for Warren at wideout.

The Jacks posted over 300 yards in total offense in a game that was shortened due to the sportsmanship rule.

Defensively, Jalin Lee and Lee Johnson both picked off a pass each, with Jalin Lee returning his for a touchdown.

Jarard Payne returned one kickoff for a 76 yard touchdown.

The Lumberjacks will now get prepped to take on the DeWitt Dragons October 15 at Jim Hurley, Jr. Stadium in Warren, in the 2021 homecoming game for WHS. DeWitt is 3-3 overall and 2-1 in the 8-4A, coming off a 44-14 loss to what is a very good Crossett Eagles team.

For more photos from Robert Camp from the Warren vs. Dumas game, click here.