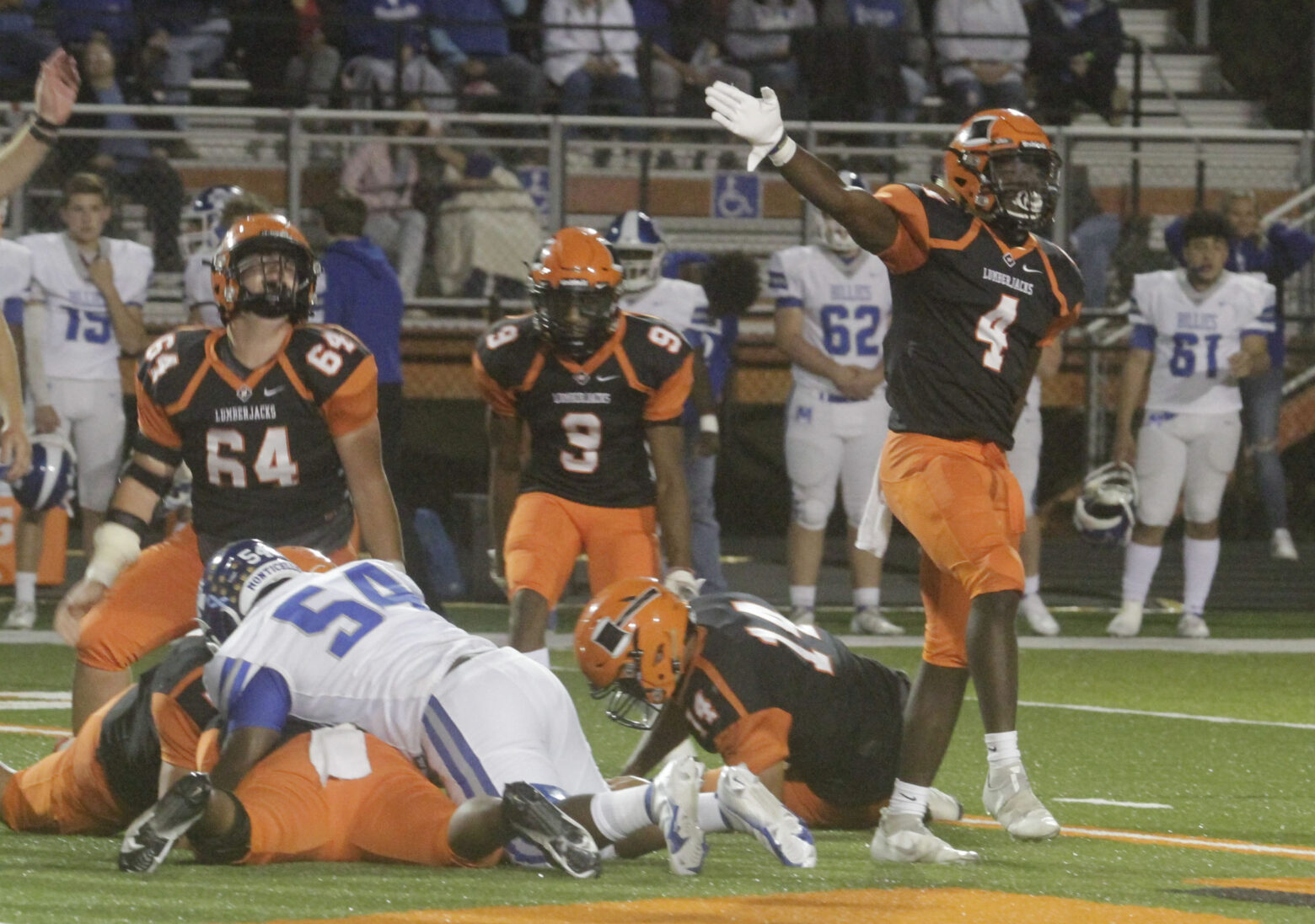 Balance has been restored to the universe, as the Warren Lumberjacks took down the Monticello Billies in the Union Bank and Trust Saline River Shootout rivalry game Friday night, October 22, 2021 by the resounding final of 41-6.

It’s been 364 days since Monticello just edged out Warren by the final of 18-12 in overtime, at Monticello, in the middle of a monsoon. In 2020, it was the only conference loss Warren sustained, and it was a game that was so very close to going the other way.

Prior to 2020, Warren had not lost a game to the Billies in the last decade. The teams did tie 6-6 in the final non-conference edition of the matchup in 2011, but since that time Warren had owned the series. Then, in 2020, the Jacks felt the brunt of a perfect storm, dealing with a sudden brash of injuries, and well, an actual storm. Rain to be exact.

The 2020 loss seemed to be less of a blow to Warren than it was a monumental achievement for a Monticello program that has struggled to find success against the good guys from the west side of the Saline. Warren went on to a deep run in the 4A State Playoffs, coming all-to-close to another trip to War Memorial in December 2020. However, the Monticello loss left a sour taste. Since then, I’m sure Coach Hembree and his guys have had this game circled on the locker room calendar.

The Jacks certainly showed up to Jim Hurley, Jr. Stadium in Warren Friday evening with the look of being on a mission, a mission to remind our neighbors to the east what we are, the best. From the onset, Warren’s energy and pace was a problem for an already struggling Monticello team, who came into the game with a 2-2 record in the 8-4A, having dropped games to both Star City and Crossett.

Warren on the other hand were coming off of a set of results that have put the Jacks in poll position for a conference title as we come into the home stretch of the regular season. Warren arrived with an overall record of 6-1, with an 8-4A record of 4-0, hoping to make it 5.

Monticello won the coin toss and elected to receive. A nice kickoff by Jose Jacinto and good coverage and a tackle by Warren’s Treylon Jackson saw Monticello begin their opening drive from their own 18-yard line. They picked up one first down, moving the ball to the 43, but on second down and eight, Maddox Lassiter and Aiden Weaver stuffed the middle for no gain. On the next play, with third and eight to go, Monticello spilled the ball on the ground, and Warren’s Delfino Rivera recovered to set Warren up with pretty good field position.

Warren’s first offensive possession lasted just one play. With 8:48 to go in the first quarter, Maddox Lassiter pitched the ball to tailback Treylon Jackson. He stopped and launched a deep ball to Jarard Payne for a 47 yard touchdown. Payne left the corner in coverage in the dust. Jacinto knocked through the extra point as Warren went up 7-0.

Monticello’s offense struggled to get moving on the ensuing drive. That was in part because of Warren’s Marcus Greene and Aiden Weaver, who harassed the quarterback and eventually got the sack on third down. The Billies were forced to punt, giving Warren the ball at around midfield.

The Lumberjacks then gave Monticello a good helping of Cedric Calbert. The senior Lumberjack tailback stitched together several nice runs before running in Warren’s second touchdown of the night with 4:02 left in the quarter. Again, Jacinto’s extra point was good. Warren led 14-0.

The Billies were gifted decent field position after some poor kickoff coverage gave them the ball at Warren’s 16 yard line. However, the Jack defense stood tall, forcing Monticello into a third and long situation with just under three minutes left in the quarter. The third down pass sailed into the left corner of the end zone, where Warren’s Jalin Lee went tall and hauled it in for an interception.

A stalled drive on the next Jack possession meant Warren was forced to punt for the first time on the night just before the end of the quarter.

Into the second period of action, a sack by Warren jarred the football loose. Lumberjack Aiden Weaver recovered on the Monticello 31-yard line. Warren’s offensive line put the finishing touches on the short drive, clearing the way for Cedric Calbert to get his second touchdown of the evening from 12 yards out to make it 21-0.

Desperate to get a grasp on the game, the Billies tried to go to the air on their next drive, but on second and nine, the quarterback was hurried and run out of bounds for a loss of five. Then on third and 15, Connor McDiarmid made his first sack of the ballgame, cleaning up the play that was pressured by Marcus Greene. Warren’s defense was swarming in the backfield, and that didn’t stop much throughout the remainder of the night. Monticello again was forced to punt. The kick went out of play at the Billie 48-yard line.

Maddox “Maddog” Lassiter wasted little time. Just moments later he went over the middle through the air to Tayshawn Johnson. Johnson made the grab, breaking a tackle on a beautiful spin move that required some high-level balance. After breaking the tackle, he burned three defenders on his way to the end zone for a 48 yard catch and run. Jacinto’s extra point was good to make it 28-0 Warren midway through the second quarter.

Jalin Lee continued to be part of a pesky Warren defense that seldom gave Monticello a respite, making a big tackle on the Billies next drive for a loss on second down. They were forced to punt a player later after an incompletion.

With 1:38 left before the halftime whistle, Lassiter hit Jacari Lee over the middle on a bullet. Lee shimmied his way to the one, but fumbled. Fortunately for Warren his fumble fell aptly for Jarard Payne, who promptly fell on the ball in the end zone for another Lumberjack touchdown. The extra point was missed however, so the Jacks went into halftime one point shy of the sportsmanship rule going into effect at the start of the third quarter. Warren led 34-0 at the half.

The Jacks extended Monticello’s life a bit in the third, as the opening kickoff of the second half was fumbled by Warren and recovered by the Billies. They took advantage, getting on the board with nine minutes left in the third period through a one yard rushing touchdown. The extra point was blocked to make the score 34-6 Warren.

Monticello did threaten again four minutes later, driving the ball to the Warren nine. However, Warren’s defense stood tall and won the ball back after a turnover on downs.

Late in the third, Jacari Lee took a speed sweep 46 yards from the nine to the Monticello 45-yard line. Then Coach Bo Hembree called on Treylon Jackson. Jackson, along with the Warren offensive line, picked up gains of 12, 11, and finally 11 yards for a touchdown. Jacinto’s extra point was good to bring Warren’s lead to 41-6, and more importantly to the 35 point threshold for the sportsmanship, or mercy rule, to go into effect, meaning the clock would no longer stop.

Warren’s second team offense did come in and get a few reps, but the game was in the book for the most part as was the final score, as Warren came away with the 41-6 win over Monticello.

The Lumberjacks put up a total of 373 yards of total offense on the night, although the game was shortened by the mercy rule. The Jacks found 232 yards on the ground and 141 through the air.

Cedric Calbert led Warren on the ground with 13 carries for 108 yards and two touchdowns. Jacari Lee carried the ball five times for 86 yards, and Treylon Jackson had six hauls for 43 yards and a score.

Maddox Lassiter went 4 for 13 in the air attack, but had 94 yards and a touchdown pass. Treylon Jackson had one pass for a touchdown of 47 yards.

The Lumberjacks move to 7-1 overall and 5-0 in the 8-4A Conference. Warren now faces two weeks of road trips to attempt to seal the conference title, with a game next week at Hamburg, and then heading back to the delta to take on Central of West Helena November 4 in the final game of the regular season. Hard to believe we are that far along.

Warren brings home the Union Bank and Trust Saline River Shootout Trophy once more, restoring it to its rightful home, and reaffirming that Southeast Arkansas is orange.

For more photos from Robert Camp from the Warren vs. Monticello game, click here.