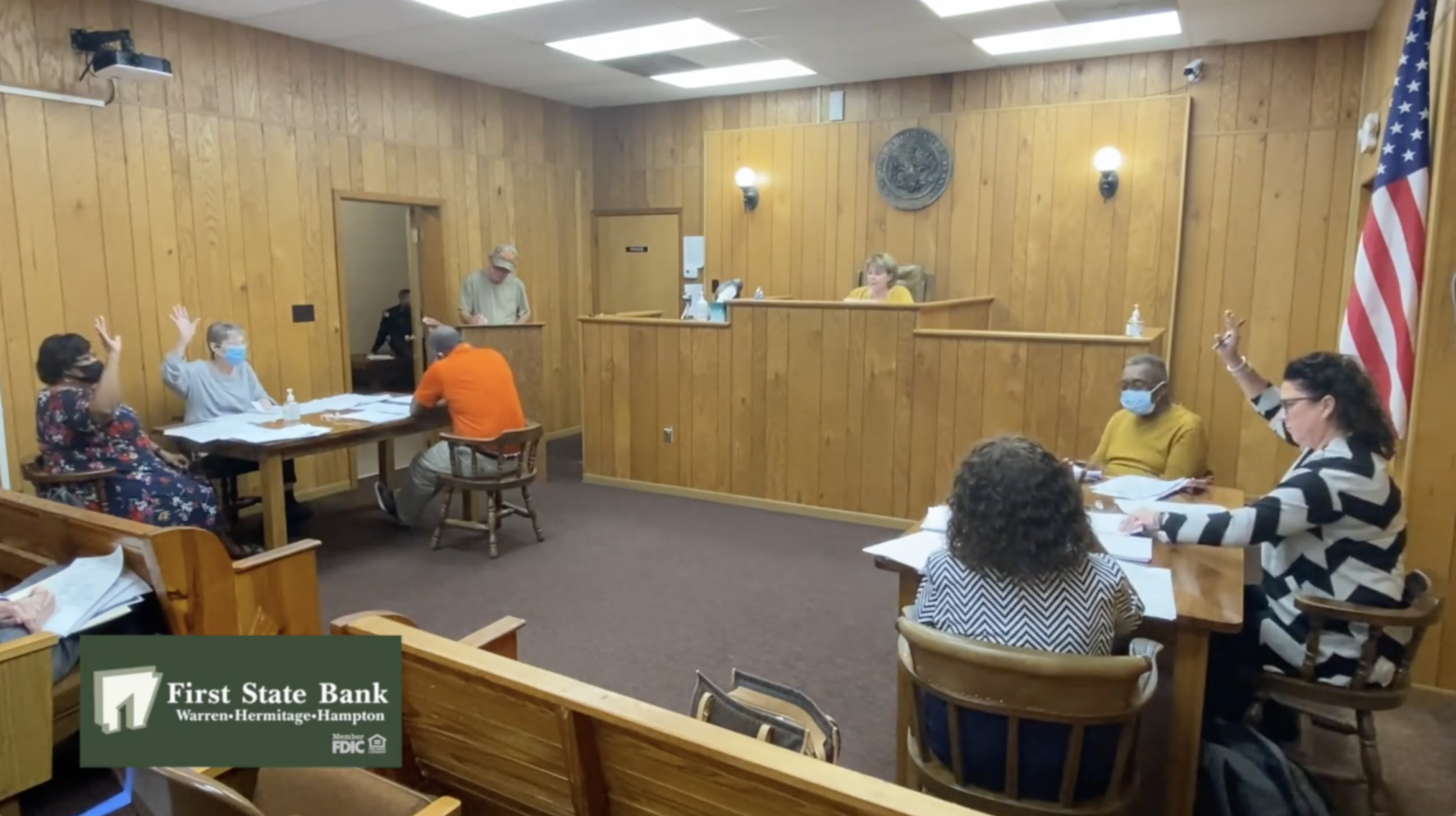 All six members of the Warren City Council were present Tuesday evening, October 12 for the regular monthly council meeting. Mayor Densia Pennington presided. The Council was presented the monthly and year-to-date financial reports by City Clerk Helen Boswell and then received written and verbal updates from all department heads, as well as written reports on all City boards and commissions that met in September.

The City Clerk informed the Council that the City received $72,516.13 in city sales tax revenue for the month and $54,341.42 as the City’s share of the county sales tax. Both are increases over last year.

The council then approved the route for the Homecoming Parade, granted permission to sell an older police car that has been replaced, and passed ordinance #938 allowing retired employees to stay on the Municipal Health Plan if they pay 100% of the premium.

There was detailed discussion of paying premium pay to city employees who worked during the pandemic. The money has been provided by the federal government. The Council discussed who can receive the pay and how much. The matter was tabled for further research. The Council indicated they fully intend to approve premium pay as soon as possible.

Mrs. Katherine Poole, a resident of N. Chestnut Street addressed the Council relating to property adjacent to her home. The property is in horrible condition with no utilities according to Mrs. Poole. Mrs. Poole state that someone is living in the house and has been burning human waste on the property. The Council asked what options can be followed and how quickly. They recommended contacting the Health Department at once and doing everything possible to proceed with the cleaning up of the site. Apparently the owner is not the person staying on the property.

Mrs. Virginia Phillips also addressed the Council concerning the street she lives on. There are drainage issues and a need for repaving. The Street Committee will investigate.

The council ordered property at 411 Cherry Street to be mowed and cleaned up.

The Street Committee, chaired by Council Member Moseley, recommended approval of a contract with Riley Paving Company to pave streets as authorized by the council at a cost of $130.00 per ton of asphalt installed. The paving was bid out twice and Riley was the only bid received.

In other action, the Council approved to install some speed bumps in the Belaire Subdivision in response to a request by citizens that live in the area.

In response to questions from the Council members, Mayor Pennington reported that the recent inspection of the Bryant Building shows there is asbestos to be abated. She is seeking a grant to pay the cost.

The Mayor also stated that Warren has been chosen to take part in the Retail Academy to focus on growing the retail business community in Warren. She updated council members on the construction progress of the city’s rifle and pistol range. It is moving along well according to the Mayor.