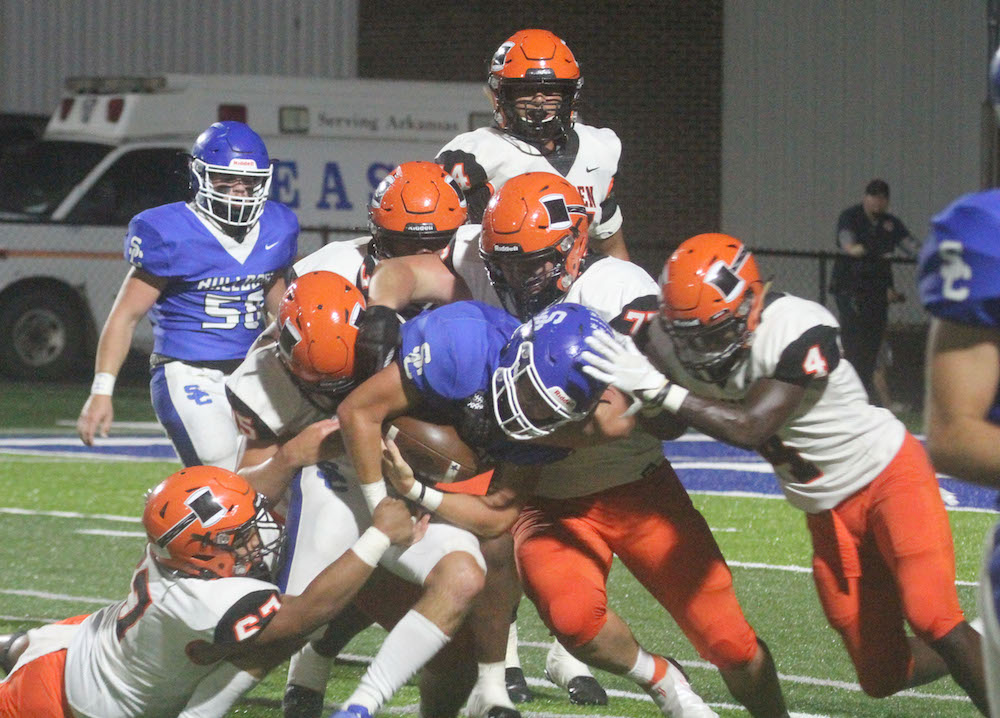 Coming off a hard fought win last Friday evening against Crossett, the Warren Lumberjacks made the short trip north to Star City Friday, October 1, 2021, defeating their second 8-4A conference opponent of the year by the final of 40-15 in a game that was essentially decided by the halftime whistle.

Warren’s win Friday night was the eleventh consecutive win for the Lumberjacks against Star City. Warren’s last loss to the Bulldogs came in 2010. The 2010 loss is the only loss Warren has had to Star City since at least 2004.

Both teams carried an overall record of 3-1 into the game Friday night, and both boasted a 1-0 record in the conference. Warren defeated Crossett last week by the final of 40-34. Star City arrived looking to build some momentum after an opening conference win against Monticello in an offensive starved ballgame that ended in a 10-0 victory in week four.

Warren won the toss and elected to receive. Tayshawn Johnson carried the opening Star City kickoff back to Warren’s 35-yard line. The running game was rolling early for the orange and black, as early in the drive tailback Cedric Calbert picked up a nice chunk of seven yards. With just a minute gone in the opening quarter, Calbert’s number was dialed again. This time he ripped off a 30 yard gain on the ground to the Star City 31-yard line, setting Warren up with an excellent opportunity to take the lead quite early. Calbert however was shaken up on the tail-end of the play, aggravating that knee that’s given him some struggles so far this season. Good news for Lumberjack fans, Calbert jogged off and looked to be ok. He would not however re-enter the ballgame.

Later in the drive, Warren’s offense stalled. On third down with eight yards to go for the first down marker, quarterback Riley Cornish tried to hit Jacari Lee over the middle through the air, but the pass fell incomplete. Warren, already deep in Star City territory, elected to go for the fourth down conversion, but the play was unsuccessful. The Jacks turned the ball over on downs.

Star City’s option offense looked hot on their first drive. The Bulldogs were full of energy, and that seemed to radiate throughout the home side’s western bleachers, as a loud Star City crowd showed their support. Around the 9:00 mark in the first quarter, Star City converted a crucial third down play via a quarterback sneak to keep the drive alive. Their running game kept the clock ticking, and four minutes later Star City drew first blood, scoring on a three yard rushing touchdown. The extra point was good and the Bulldogs led with 5:05 remaining in the first by the score of 7-0.

After Cedric Calbert’s exit, the bulk of the running game duties fell on the shoulders of Warren’s Treylon Jackson. On Warren’s second offensive possession, Jackson made a statement right off the bat as he broke off a 35 yard gain, taking the ball into Star City territory to the 40-yard line. Just a few seconds later, with 4:43 left in the first, Lumberjack quarterback Riley Cornish sliced open the Bulldog secondary, connecting with Jarard “New Orleans” Payne for a 40 yard touchdown pass that was right on the money. It was a beautiful play, as Payne created a little space as Cornish let go of the ball, and by the time he hauled it in he had a good two yard separation from the defender. A great throw by Cornish and an assured catch by Payne put Warren on the board for the first time on the night. Jose Jacinto’s extra point was good. Things were all knotted up at 7-7 late into the first quarter.

The Bulldogs’ second possession got off to a rocky start. A delay of game penalty sat them back five yards. They really couldn’t seem to muster a recovery on the drive. With under four minutes left in the quarter, a Star City pass over the middle was dropped as Jacari Lee applied a stout pop to the receiver as the ball was delivered. They would not test the middle substantially the rest of the night. Star City was forced to punt.

Warren didn’t fair much better on their next possession. The Jacks were forced to punt after coming up short on third and 14.

With a minute remaining in the first quarter, Star City went to the air on third down around midfield. An out route looked to be open, but Warren’s Tayshawn Johnson flew in and batted the ball into the first row on the Bulldogs side of the stadium. Star City once again was forced to punt away.

Into the second quarter, Warren’s next drive looked as if it might be dead in the water, as the Jacks faced a third and long situation after a penalty set them back. Coach Bo Hembree called in a shotgun tight formation. Cornish received the snap, patiently looked to pass, and dropped a looper between defenders into the hands of Jarard Payne. He picked up the first down at around the Star City 36-yard line. The next play Treylon Jackson rocketed through the defensive line and past the linebackers and secondary, scoring for the Jacks on a 36 yard rushing touchdown. Warren led 14-7 with 11:33 left in the second quarter after the extra point by Jacinto.

That solid Lumberjack defense did its job on the next Bulldog possession. On second and 10, Landon Wolfe ripped through the offensive line and made a tackle for a loss of two. With 10:21 left in the quarter Star City was forced to punt.

Warren’s next drive was a work of art. On the first third down of the drive, Treylon Jackson blasted through a seem to pick up a first down. A couple of plays later, quarterback Riley Cornish dropped back to pass, bought some time by moving in the pocket, and then threw a completed pass to Tayshawn Johnson for a big gain down to the Star City 34-yard line. At the 8:43 mark of the quarter, Cornish looked to pass. Jacari Lee paused for what looked to be a comeback hitch route. He only stopped for a second, then turned back upfield and did what Mr. Speed tends to do, left every defender in his wake. Cornish slung it downfield and Lee took it in stride 34 yards for a touchdown. Nobody was near him when he caught the ball. It was truly a beautiful sight. Jacinto’s kick split the uprights as Warren extended the lead to 21-7.

Star City, needing a response, took to the air on their next possession. A pass to the left was tipped, and waiting at the end of the rainbow as it fell was none other than Warren’s “New Orleans” Payne. As it fell into his arms, there was really no doubt about the eventual outcome of the play. Payne picked the pass off and sprinted 41 yards for the pick-six. The interception returned for a touchdown basically ended any hopes Star City might have had of a comeback. Warren never looked back. With 7:40 left in the first half, the Jacks led 28-7 in what was quickly becoming a rout.

Warren defender Jalin Lee brought havoc on a third and 12 play Star City desperately needed to convert with 4:40 to go till the break. Jalin busted through the offensive line as the Bulldogs looked to pass. He sacked the quarterback and pushed Star City back even deeper. Their fourth down pass to attempt to get something, anything going, fell incomplete and the Jacks took over on downs.

Coach Hembree’s Jacks tacked on another touchdown just before halftime. They marched downfield on a drive that culminated in Riley Cornish hitting Jacari Lee over the middle through the air for a 9 yard touchdown. Lee had to claw and push for the final yard to get the six points, but he managed it, reaching over the line with 1:01 left in the second quarter. The extra point was no good. Warren led 34-7, and that would be the scoreline as we went into halftime.

The second half was fairly uneventful as the game was well within hand at the midway point. Warren added one more score with 3:12 left in the third quarter. Landon Wolfe carried in a six yard touchdown on the ground. The two point conversion to try and invoke the mercy rule was no good.

Star City would not get into the end zone but one more time as Warren brought in a massive package of subs late in the game. The Bulldogs scored on an 11 yard rush with 3:04 remaining in the fourth. Their two-point conversion was good. Warren still led 40-15.

Warren brought in sophomore Matthew Powell to get a few reps at running back in the final minutes. Powell put on a nice display, picking up a few big chunk yardage plays, including a 21 yard gain.

The Lumberjacks ran the clock out, winning by the final of 40-15.

Treylon Jackson was named the AHF Products Lumberjack Player of the Game, having carried the ball 13 times for 136 yards on the night. Jackson scored one touchdown.

Cedric Calbert had two carries for 40 yards prior to his first quarter injury.

Landon Wolfe carried the ball four times for 19 yards and a touchdown.

Riley Cornish was 12 for 21 through the air. He threw for 159 yards and three touchdowns.

Jacari Lee and Jarard Payne were the dominate forces downfield. Lee recorded eight catches for 94 yards and two touchdowns. Payne had three grabs for 62 yards and one touchdown.

Payne also had one interception, which he returned 41 yards for a touchdown.

The Lumberjacks had a total of 261 yards rushing and 168 yards through the air, giving a total on the night of 429 yards of offense. Not bad for a game shortened by Star City’s slow pace and run game.

Warren now sits at 4-1 overall with a conference record of 2-0. They hit the road once again next week, October 8 to face the Dumas Bobcats. Dumas is looking to bounce back after a difficult 66-14 loss to Crossett this week. The Bobcats are currently 2-2 overall and 1-1 in the 8-4A.

For more photos from Robert Camp from the Warren vs. Star City game, click here.