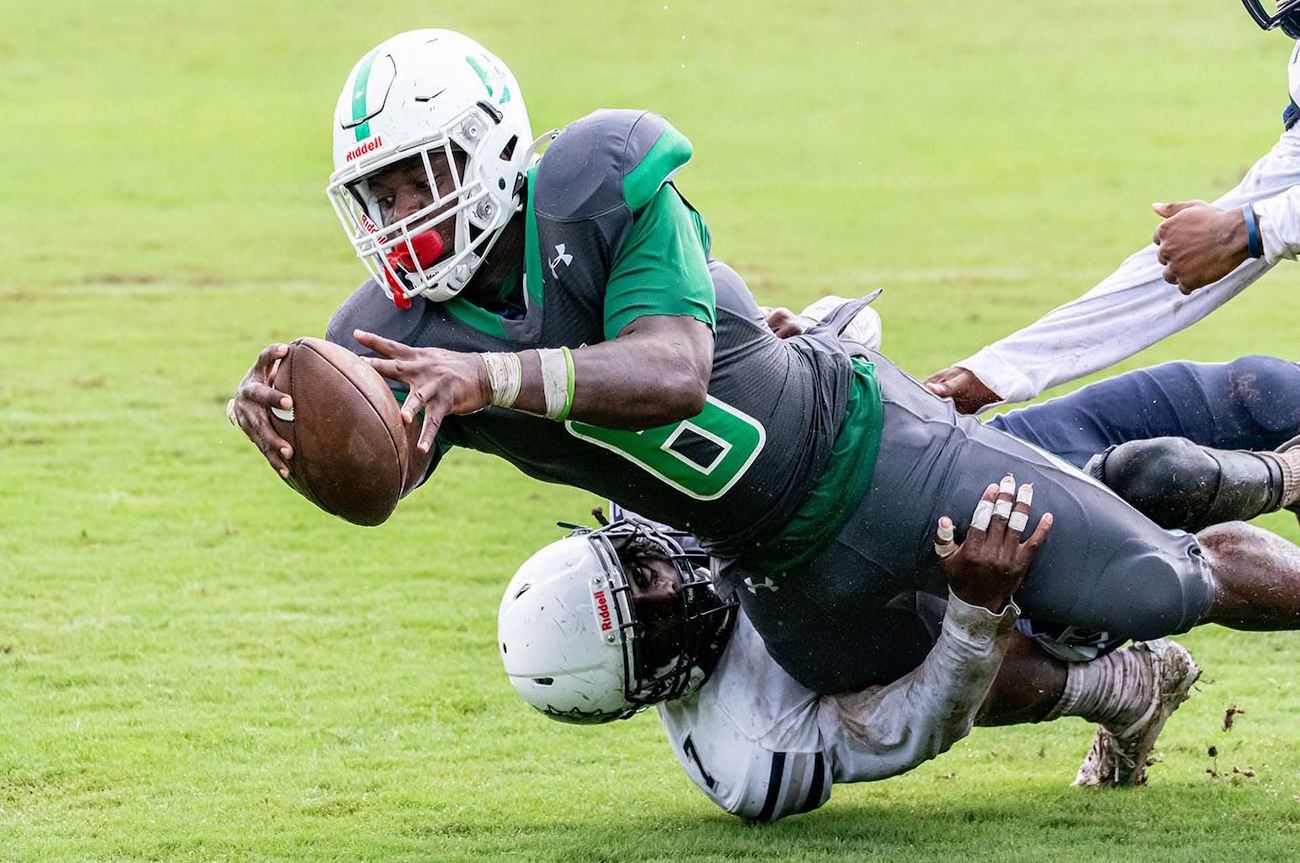 MONTICELLO, Ark. – In the the rain and the mud the University of Arkansas at Monticello football team slipped past Southwestern Oklahoma State at home for the Weevils’ third win of the season Saturday. The Weevils leaned on the ground game to grind out the victory 18-16 amid the sloppy weather.

With the win UAM improves to 3-2 overall and against the Great American Conference this season. SWOSU drops to 0-4 on the year with the loss.

The wet and rainy weather played havoc with ball control early when the Bulldogs were able to get on the scoreboard first on an errent snap on a punt by UAM that Colburn Crenshaw had to fall on in the end zone for a safety.

On the next possession, SWOSU was able to keep the momentum from the safety to march down the field for a scoring drive by the offense. The Bulldogs capped the drive with a 31-yard touchdown run, but failed on the two-point conversion leaving UAM with an 8-0 deficit.

The Weevils offense started to click with its best drive of the first half midway through the second quarter. UAM used a 13-play drive to find the end zone on a three-yard carry by Devontae Dean. The Weevils came up short on the two point conversion making the score 8-6 in favor of SWOSU.

UAM’s defense stepped up on the ensuing possession forcing a three-and-out by the Bulldogs to give the Weevils offense another chance before the end of the half.

Demilon Brown found his two favorite targets for big completions in the final minutes of the first half. Brown first connected with DeAndre Washington for 20 yards to move the ball into SWOSU territory. Three plays later he hit C.J. Parham in stride for a 41-yard touchdown to put UAM up 12-8 at the half.

On their second possession of the third quarter the UAM ground attack began to roll as Brown capped another scoring drive with a 22-yard run to set up his own two-yard rushing touchdown expanding the Weevils’ lead to 18-8.

The wet weather caused trouble for UAM again later in the third quarter when another wild snap got past Crenshaw on a punt before he fell on it in the end zone for the second safety of the contest.

SWOSU found the end zone with just under 12 minutes to play in the fourth quarter, but the UAM defense shut down the two-point conversion to hold onto the lead 18-16.

Following a three-and-out by the Weevils, the Bulldogs were driving again with a chance to take the lead. Sitting just outside of the red zone the UAM defense forced their second takeaway of the game when TJ Brumfield pulled down his first interception of the season with 6:49 to play.

UAM turned back to the run game pounding the ball with Brown and Dean to march well into Bulldog territory to melt the clock away. Brown finished the contest with three kneel downs to run out the clock and secure the 18-16 win for the Weevils.

The Weevils out gained the Bulldogs 315 to 255 on offense with the ground game carrying the bulk of the load. UAM rushed for 165 yards and two touchdowns in the game.

Brown led the rushing attack for UAM carrying the ball 24 times for 127 yards and one touchdown. Dean added 44 rushing yards and a score on 16 carries in the contest.

Through the air Brown finished 8-of-16 passing for 150 and one touchdown. Parham led the receiving corps for the Weevils with five catches for 99 yards including his 41-yard touchdown reception.

The UAM defense shut down the SWOSU running game only allowing 82 yards on the ground and limited the passing attack of the Bulldogs by adding a pair of interceptions.

The Weevils are on the road to face Northwestern Oklahoma State Saturday, Oct. 9. Kickoff from Alva, Okla. is set for 2 p.m.