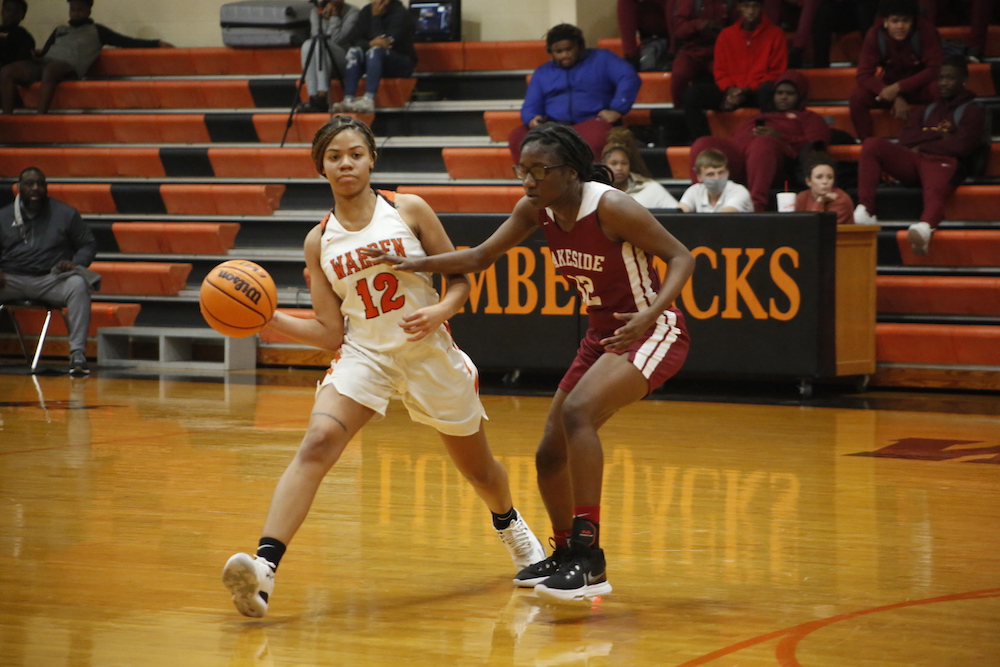 Warren, Arkansas – A fourth quarter fifteen points helped the Warren Lady Jacks take down Lakeside High of Lake Village and secure Warren’s third win of the 2021/2022 season Tuesday night, November 30, 2021 by the score of 42-36 in front of a good home crowd.

The Lady Jacks, who are really developing into a cohesive unit, carried a lead through most of the first quarter, but Lakeside found the bottom of the net from long distance with the period buzzer sounding. Warren was down 10-8 after the first.

Warren regained the lead before the halftime break behind continued solid offensive play from Keller Bigham and Paris Wright. Warren led by two at 18-16 by the midway point.

Lakeside refused to go away however in the third. The three ball proved to be their biggest weapon. With 3:48 left in the period the game was tied. Warren’s Tyairean Bass hit a three to give Warren the lead once again, but Lakeside answered on their next possession. The two could not be separated through the third as the score was tied at 27-27.

However, in the fourth the Lady Jacks brought some solid defensive play. Coupled with offensive contributions from all around the floor, including points from Mylesha Yao and Ana Tinoco, Warren defeated Lakeside of Lake Village by the final of 42-36.

Warren’s Ladies go above .500 on the year with this win that carries them to a 3-2 overall record to-date.

Senior Keller Bigham put in another stellar performance, scoring 18 points, 14 of which came from two-point field goals. She was also perfect from the free-throw line on the night, going four for four. Bigham is currently averaging 15.6 points-per-game, and this was her second in a row to put up 18.

Paris Wright put in one of her best performances since the start of the season. She scored 14 against Lakeside.

The Lady Jacks will be back in action Thursday evening, December 2 as they host Drew Central. There will be a seventh grade girls game and a junior high girls game prior to the Lady Jacks taking to the court. Those games tip off at 5:00 p.m.