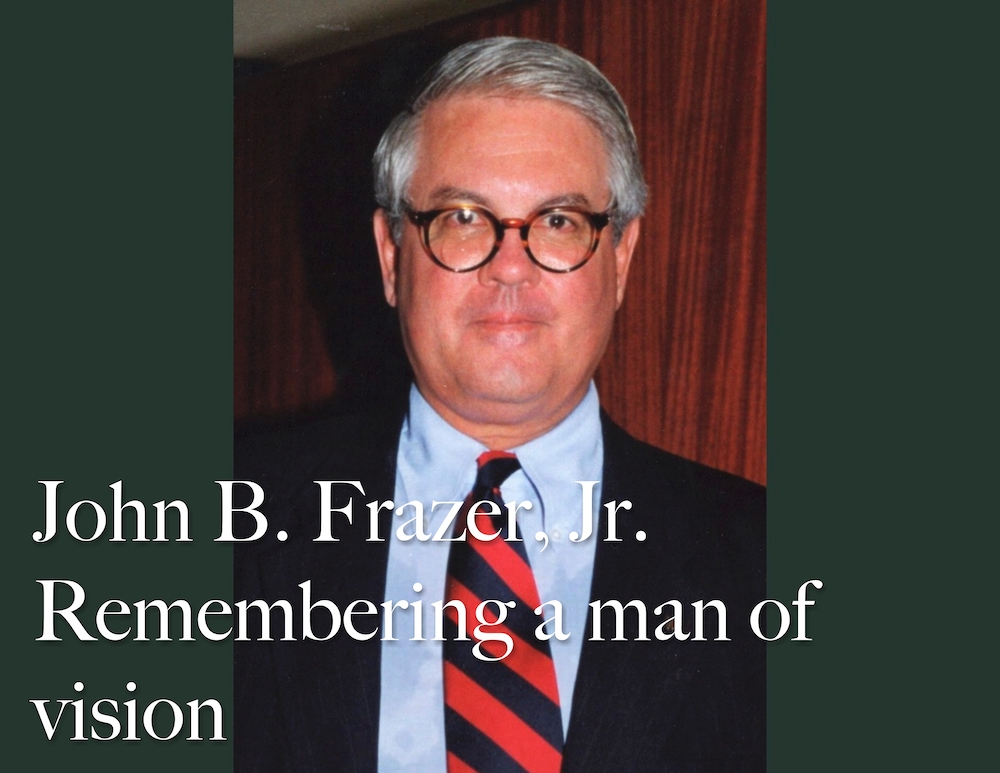 As has been noted in Saline River Chronicle and other media outlets, John B. Frazer, Jr. passed away Friday November 5, 2021 at age 82. His obituary has been published and a wonderful piece was written by Warren native Maylon Rice in one of his versions of “Pastimes” for Saline River Chronicle. Everything written and published has demonstrated the life of success and service Mr. Frazer lived in and for the City of Warren, his family, and indeed South Arkansas and all of Arkansas. As Preacher Wayman Mann said at the graveside, “John Frazer was known from Warren to the White House.” He contributed greatly to so many causes and helped so many people, it would be impossible to list them all. He cared deeply for his church, helped other churches and was a tower of strength and support for the Donald W. Reynolds YMCA of Warren and Bradley County.

He not only gave generously to the Y, but raised lots of financial support from others to help the Y operate. He supported Warren public education and was very helpful to the Lumberjack Athletic Department. He was always there for the Pink Tomato Festival and every civic club and worthwhile cause in Warren.

One might ask why I am repeating things many people already know. The reason is because of what he did for Warren and for me personally. Not for anything in return, but just to help and direct me to give back as best I could in work and dedication. I have stated publicly that the three men in my life that had the most influence were my own father, Ellis Reep, my academic advisor and professor in college, Dr. Charles D. Dunn, and John B. Frazer, Jr. My father taught me how I should live, Dr. Dunn taught me the academics of government and politics, and Mr. Frazer taught me how to get things done and how to manage an organization. All John Frazer expected of me was to work and get the job done, and done right.

Mr. Frazer is best known as the owner and operator of Frazer’s Funeral Home, as Chairman of the Board of Warren Bank and Trust Company, and as Mayor of the City of Warren from 1975-1986. He voluntarily choose to not run for a fourth term, saying he never intended to make a career in politics but served only to help move Warren forward and set up a functional and beneficial municipal government. He was the last of the part-time Mayors, although he always spent as much time as needed at the job while continuing his duties at the Funeral Home and the Bank. His last action was to work with the City Council to create a full-time Mayor’s office to manage the City.

He helped so many people, often unknown to the public. I know of many cases and have heard about many more. He did not crave attention, just worked at getting the job done and implementing his vision. Mr. Frazer was trusted and exuded confidence.

I can well remember one day in the 1970’s riding with him in the Westside area of Warren. The City had a major community development project underway utilizing a federal grant to pave streets, install sanitary sewer, and upgrade low income housing. I was managing the grant implementation, but he kept a close watch on the endeavor. We were riding in his old Bronco checking out the construction progress. On Watson Street we drove up on a fire with several people standing around it and watching. It was an out building and we were concerned it was an out of control fire. Mayor Frazer stopped in the middle of the street and rolled down his window and shouted, “do I need to call the fire department.” An elderly gentleman responded with a smile, “no sir Mr. Mayor, we are burning down the outhouse thanks to you getting us on the sewer system.” The new sewer line had been installed and the grant was paying to connect the house to the City system. They were burning down the outhouse. As we drove on, Mr. Frazer said, “that is why we are doing this, to upgrade the lives of the people.” He said, “This is worthwhile.” That was one reason he ran for Mayor, to upgrade the low income neighborhoods and bring all of Warren into the then 20th century. I never forgot his comments.

John always had vision. Proverbs 29:18 states, “Where there is no vision, the people perish: but he that keepeth the law, happy is he.” John always had a vision and it was well thought out. Getting that vision implemented made him happy and benefited many people. He was concerned about all neighborhoods and knew his way around them all.

Mr. Frazer worked hard all twelve years he served as Mayor and continued to support the city after he left office. He served on the Warren Aviation Commission for which he had a passion due to his love of flying his own plane, “November 5 3 Foxtrot,” which he stationed at the Warren Municipal Airport and flew many miles on behalf of projects for the City.

John gave me my opportunity for which I am and will be forever grateful. He did so for others as well. He cared for his family and his church and he will be remembered as a giant historically when the history of Warren is considered. I could go on but I know what he would say, “stop talking about me and go to work on your vision.”