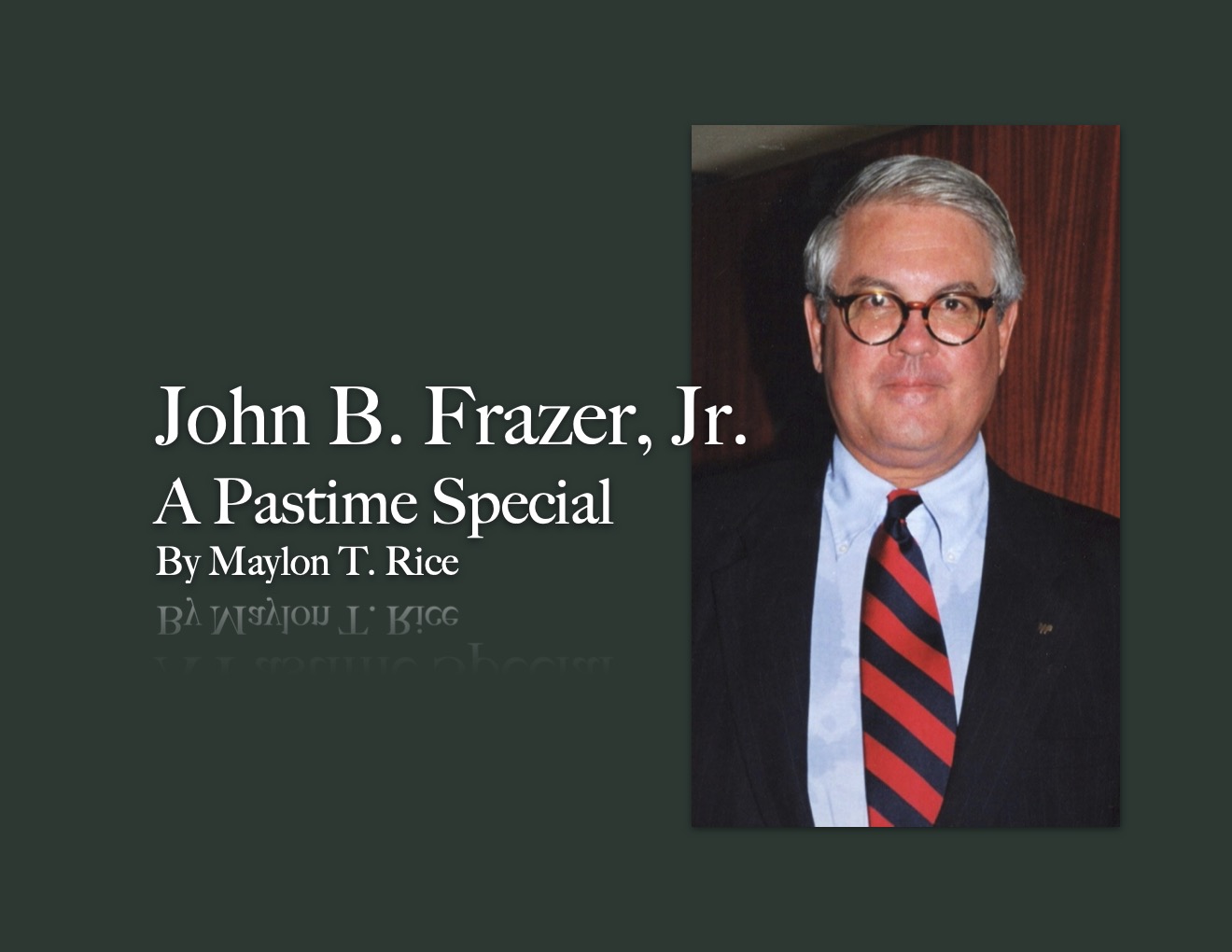 A man of many talents, one intense love – for the City of Warren, Ark.

This is a sad Pastime, sorrowful only in that a good man has died and left his indelible marks on the red brick streets of Warren.

My mentor, the late Robert L. (Bob) Newton Jr., who could write such tributes with apparent ease, quietly confided in me, as a newspaper writer, these such heart-felt tributes of people we know, are among the most emotional, gut wrenching and difficult articles to pen.

The footsteps a man makes of his life in his hometown leaves a mark, Mr. Bob told me. Some of those marked steps, left by a few, are easily erased by the next wind; other such printed are gone by the evening sun or advancing months; yet some of these life steps stay around for time eternal, as if cast in solid rock for all others both young and old to see, reflect and remember.

Today, I am remembering my friend, John B. Frazer Jr., who left this earth this past week.  There are others in the Warren community he mentored and even those out in the state who had connections with him in civic, political, banking and funeral home trades all over this state and the southeast United States.

I’ll profess that in the last twenty years, I never visited Bradley County, I didn’t try to see him, if but for a minute. His counsel was always warm, welcoming and at times a microcosm in time of his very unique personality.

He gave me my very first airplane ride in his trusty airship – N53Foxtrot – at the Warren Airport, as we tracked Zane Anderson in a new-fangled, self-built gyrocopter device in the early 1970s. I once went quail hunting with him and his Siloam Springs funeral buddy, Robert (Bob) Wasson, down some of the Potlatch roads in northern Bradley County. It was a very arduous hunting outing, most covey’s flushed were dispatched with expert shooting.

I’ve ducked into those raucous political “mixers” late into the night in Southeast Arkansas over the years, to see him stoically standing in the back of the packed room listening to more want to-be-governors, congressmen and a United States Senator or two raising money in a campaign trail through Southeast Arkansas. Some of these politicians got elected, some didn’t. Some had John’s political backing. Others simply didn’t.

Few election night victories surprised John, he listened to others, kept his own advice pretty close to his vest, but he could see the outcomes where often others didn’t or wouldn’t.

In writing these Pastimes, I know John knew many of the ins and outs of these stories for generations.

One I am writing for next spring involves the construction of the Warren Country Club Golf Course.  Some of that land was once owned by his family. John rode his horse out there on that land, once filled with some deep wallows and creek beds, he said in a description of that property.

How deep were those wallows or creeks beds, I asked?

“Well, my mother could not see her son riding his horse down in them,” he said laughing at the memories. How did they fill those trenches? I asked. “With the lumber mill boiler cinders,” he said.

John knew who owned most properties in the county. And he knew more backstories than most of us will ever hear.

The very best introduction I’ve ever received came on a ‘spur of the moment, drop-in-visit” to the Rotary Club of Warren. John bought lunch and had everyone at the meeting in stiches with his brisk wit, laughter and heartfelt words about a visitor.

If asked he would always, always, give sound advice.

One particular event I was to be one of several speakers as a very important program for an individual.

“Always go first, when asked to speak, be the initial speaker,” he said. Sage advice that has served me well ever since that day.

He could see the breadth and depth of a political campaign, the success or failure of a business venture or where life’s bumps in the road would be and tell you with impunity or bias how to face them.

Only once did he raise his voice to me fearing I was interfering in a very personal, family matter with him.  He heard me out and later I received a telephone call with a very short, “Thank You,” for letting him know something he needed to know.

On the night of the 1975 Warren tornado, he was but three months into his first term as Warren’s mayor. He was standing in the old city hall, police/fire station dispatch office, directing crews of volunteers with chain saws around the city, dressed in a heavy plaid shirt, throat open showing his pajamas as an undershirt, a pair of firemen’s pants and turn-out boots. He was soaking wet as he had toured the high impact area of the city before coming to City Hall to direct others to areas that needed help.

All night long, he was there at command central, with a few others, the cigarette smoke was hanging in thick clouds along the ceiling, when just before daybreak I was there assisting Bill Lancaster of the Arkansas Gazette in cobbling together a story for the Sunday edition.

The telephone rang, Eddie Wayne Lathan, the assistant fire chief, turned to John and said, “Mayor, it’s NBC News in New York, and they want to talk with you.”

An evening of death, destruction, uncertainty had taken place, John quickly answered some yes or no and factional questions, when his next few words, I’ll never forget.

“Yes, Warren, Arkansas will certainly rebuild. We are going to be alright after this storm is all sorted out. It will be Easter here on Sunday. Our town will be in church praying for our fellow man and our town. Warren Arkansas will rebuild.”

The mood in the room of tired volunteers, frightened and anxious businessmen suddenly lifted by his strong, positive words.

A third-generation banker and a second-generation funeral man, John was a mover and shaker in the timber industry, not just in Arkansas but the United States.

He served a dozen years as Mayor and the city thrived after the storm and in an economy which was not always easy to navigate.  The wave of young people leaving to go off to college always encouraged him, although he knew many would become only visitors to the city with the red brick streets in the generations to come.

Many may remember his days as a radio announcer, disc jockey and quite a trend setter, even as far as taking his local talents from KWRF to Memphis radio as a student at Southwestern (now Rhodes College) in the bluff city.

A Warren boy, John uniquely loved his hometown and Bradley County like few others.

John had an ability to bring two friends back together after a split among them. And he could do so, with only concern for the value of a friendship that shouldn’t be ruined with hard feelings, especially near the end of a life.”

On a visit to Warren, now more than a decade ago, I told him I was there “bringing some books” for a long-time friend and mentor.

The last time I was in Warren with Covid infections raging, I dropped off a book or two for him at the funeral home.  Eschewing the personal visit, I knew John would be glad to see me and know I was back in Warren, even if for an afternoon.

Rest well my friend. Rest well your footprints are firmly in place for generations of others to enjoy.

A Pastime of peace for a man I’ll miss.