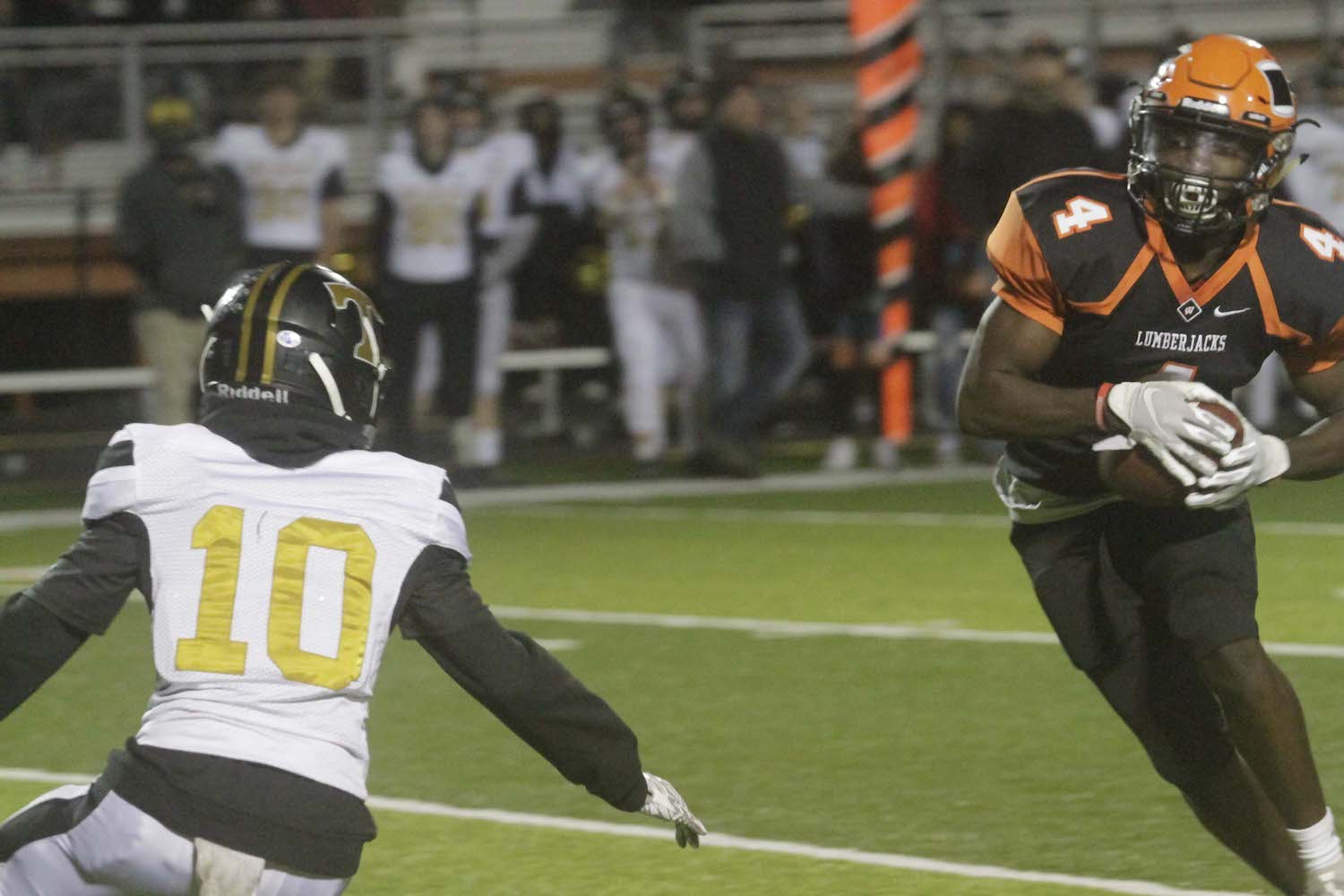 Three weeks ago the Lumberjacks traveled to Hamburg for what ended up being their final regular season game of the 2021 season. A forfeit by Central of West Helena and a bye-week later, and suddenly a Lumberjack team that was firing on all cylinders was staring down a 4A State Playoff game with the hopes that no cobwebs had formed in their play. Coach Hembree himself brought up the preparations he and his staff had undertaken trying to keep his guys mentally ready and physically in shape for this Friday night’s matchup. In the end, Hembree’s Jacks responded superbly, taking care of business at home at Jim Hurley Jr. Stadium, defeating Trumann by the final of 35-7 to advance to the third round of the State Playoffs.

Warren won the coin toss. Jarard Payne and Sam Hollingsworth served as captains on the night for the Jacks. They elected to receive the opening kickoff. Treylon Jackson, a guy who has really become a steady force within the team gave the orange and black great field position, returning the kickoff to the Jack 43-yard line.

Quarterback Riley Cornish, still easing back into play after an injury earlier this year, connected early in the drive with Payne in the flat for a 17 yard gain. The play was opened up nicely by some outstanding open field blocking by Warren’s receiving corps. Once the Jacks were into Trumann’s territory, running back Cedric Calbert put his feet to the pedal and carried Warren down to the 3-yard line within a couple of rushes. With 10:09 left in the first quarter, Cornish dropped back to pass and hit freshman A.J. Jordan on a corner route in the back of the end zone for a touchdown. Jordan went up and simply took the ball at its highest point. It was a real glimpse at what the future might hold for a Warren gem in the making. Jose Jacinto’s extra point was good. Warren led 7-0.

Perhaps Trumann’s best chance of the night to hang with Warren came on their ensuing drive. Warren’s defense struggled a bit to halt the Wildcats rushing attack, particularly in short yardage situations. Their tactic was clear. Eat up clock. After a lengthy sustained drive, Trumann found themselves deep into Warren territory having shaved off around seven minutes of the first quarter. With just 2 minutes remaining in the period, the visitors went to the air. A cross route was undercut by Jalen Lee of Warren. He bolted to the right side of the field and carried the interception back to the Warren 42-yard line. It was a huge momentum killer for the Wildcats, and would prove to be a decisive point in the game.

Coach Hembree immediately went for a big chunk of yards. Cornish hit Maddox “Maddog” Lassiter for 52 yards, flipping the field and setting Warren up for a potential score. Calbert and the offensive line did the rest. He powered into the end zone for an eight yard rushing touchdown. Jacinto converted the point after and Warren led 14-0 at the end of the first quarter.

Trumann found no success on their next drive which began at the Wildcat 15-yard line. Once again Jalen Lee was a culprit of chaos for Trumann. Coming up and making a big tackle on third down, Lee forced a punt which would only go 16 yards.

With 5:39 remaining before the end of the second, Calbert hammered home another ground score. Jacinto booted the extra point through the uprights and Warren extended their lead to 21-0.

Trumann put together a valiant effort on their following possession, reaching the Warren 16-yard line with 32 seconds remaining before the break. However they’re hopes of edging closer and closing the 21-point gap were vanquished when they failed to convert on fourth down from the 14-yard line, stopped a yard short of the first down marker.

The action of the first half wasn’t quite over just yet however. It appeared as though the Jacks might just run out the clock to go into the half, but Coach Hembree had other ideas. He dialed up a pass over the middle to “Maddog” Lassiter which Cornish completed to the Warren 42-yard line. Then, with under ten seconds to go, Cornish lofted a beauty of a strike to Jacari Lee, who broke a tackle with nothing but green grass ahead. At that point it was simply a footrace. It was a race that no Trumann defender was ever going to win. Jacari hauled it 58 yards for a touchdown. Jacinto’s extra point was good. Warren took a 28-0 lead into the halftime break.

Trumann received the second half kickoff, put together a decent drive to the Warren 13-yard line, and looked to get on the board after another clock-burning drive that melted away six and a half minutes of the third. However, on fourth and goal Jalen Lee once again played the menace, sacking the quarterback for a turnover on downs.

Trumann did finally get on the board with 1:49 remaining in the third after they intercepted a Warren pass and drove inside the Jack 10-yard line. After a seven yard quarterback rushing touchdown, the Wildcats were still down 28-7 with little hope of a comeback.

The comeback was never in the cards. Warren punched in one last score via a Treylon Jackson 11 yard rush with 2:26 left in the game. With Jacinto’s extra point, the Lumberjacks defeated Trumann to advance by the score of 35-7.

Trumann did dominate the time-of-possession, keeping the football for 70 plays over 35 mins. Warren ran 31 offensive plays and kept the football just under 13 mins.

The Lumberjacks rushed for 148 yards and threw for 222, giving a total offensive production on the night of 370 yards. Trumann had 212 on the ground, but just 79 through the air for a total of 291 yards.

Warren’s rushing attack was led by Treylon Jackson who had nine carries for 70 yards and a touchdown. Cedric Calbert picked up 55 yards on four carries, but he had two touchdowns.

Riley Cornish was 9 of 10 through the air with 222 yards and two touchdown passes.

His leading receiver for the game was Maddox “Maddog” Lassiter. Lassiter had two receptions for 85 yards. Jacari Lee had one catch for 58 yards and a touchdown, and Tayshawn Johnson had two catches for 41 yards.

Warren’s advancement to the third round sets up a huge clash as the Lumberjacks will host Stuttgart next Friday night, November 26, 2021. The Ricebirds are coming off a 63-34 win over Elkins this week. The Jacks defeated Stuttgart earlier this season by the score of 47-27, but will need to repeat the victory once more for a spot in the 4A State semifinals. The game kicks off at 7:00 p.m.