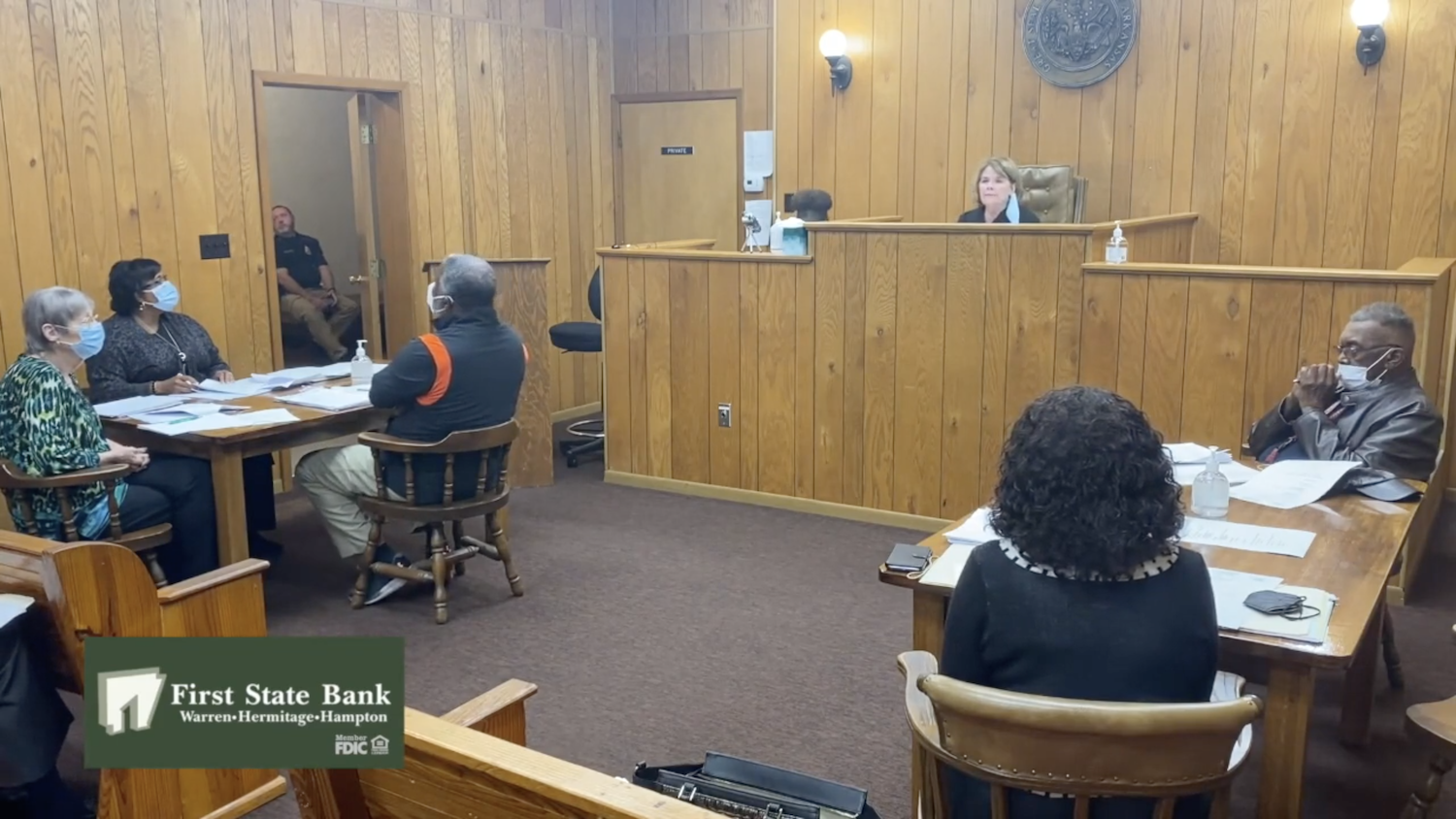 Warren, Arkansas – A number of items of business were dealt with Monday, November 8 during the regular monthly Warren City Council meeting, with a large portion of the time spent going over the proposed City 2022 budget, as well as actions and deliberations of the Council’s Ways and Means Committee, and comments from Committee Chairperson Dorothy Henderson and Mayor Pennington. Chairperson Henderson went into detail discussing the budget and reporting on the most recent Ways and Means Committee meeting. A great deal of the discussion revolved around proposed contracts for services with third parties.

The Council voted 5-0, with one absent, to approve the contracts with Area Agency of Aging, the Museum and the Tomato Festival Committee. The funding amounts will be included in the final budget ordinance.

Mayor Pennington urged the Council to fund the BCEDC and Chamber, saying she does not have time to do some things in the realm of economic development, and that some prospective projects were being discussed. Council member and Chairman of the Community and Economic Development Committee Angela Marshall asked the Mayor what projects for new jobs are being pursued by the BCEDC. The Mayor said she was not a liberty to say. It was noted that in the past the City had received monthly reports. Several Council members are desirous to use a different method to recruit new jobs. No additional action was taken.

Chairperson Henderson indicated there would be another Ways and Means Committee meeting to work to finalize the 2022 budget. Work remains ongoing to set salary schedules and determine capital expenditures. It is hoped that American Rescue Funds may be usable for several major items of equipment.

In the absence of City Clerk Helen Boswell, who is recovering from surgery, the Council elected Charlotte Brown to record the minutes of the meeting. Brown is Administrative Assistant to the Mayor. All financial reports were submitted and approved. Mayor Pennington stated city and county sales tax revenues remained strong and were up for the year.

Mayor Pennington nominated Vernon Colvin II for another five-year term on the City Aviation Commission. The Council confirmed the appointment unanimously. The Mayor announced that City Building Official/Sanitation Manager Mike May was retiring at the end of the year.

Next, the council voted to purchase a new truck for the Parks and Recreation Manager utilizing the state contract.

After that the members voted 5-0 to adopt Resolution No. A-662 providing premium pay to a number of City employees for their work during the COVID pandemic. Funds are provided by the federal government. The City Council chose to use the funding for salary benefits. The Mayor has chosen not to accept the extra pay.

Reports were then provided by the police and fire chiefs. Police Chief Hildreth told the Council the department needs about three new patrol cars and the fire chief provided information concerning the cost of a new fire engine. Mayor Pennington recommended holding on until the City determines if it can use American Rescue funding to make the purchases.

Mike May provided the Sanitation report and the Building report. The Council then voted to order property cleaned up on Abernathy Street.

The Council then voted to install street speed bumps on Cedar Street from Chestnut to Munn. Street Chairman Emily Moseley stated she had a petition from all residents of the street asking for the speed bumps.

The Ways and Means Committee recommended the city renew its legal defense insurance with the Arkansas Municipal League at a cost of $19,507.221. The full Council approved.

Then the committee recommended year end bonuses and holiday pay. This was approved.

Reports of all boards and commissions were submitted and approved. The council then discussed setting up a task force to determine recommendations for the American Rescue Plan funding that remains available.

Mayor Pennington announced the city will honor Veterans Day, November 11, by being closed, and that the Thanksgiving holiday will be celebrated by the city November 25 and 26.

The Council voted to pay all October, 2021 bills and to set the December Council meeting for 5:30 p.m., December 13. The Agenda meeting will be held Thursday, December 9 at 7:00am.