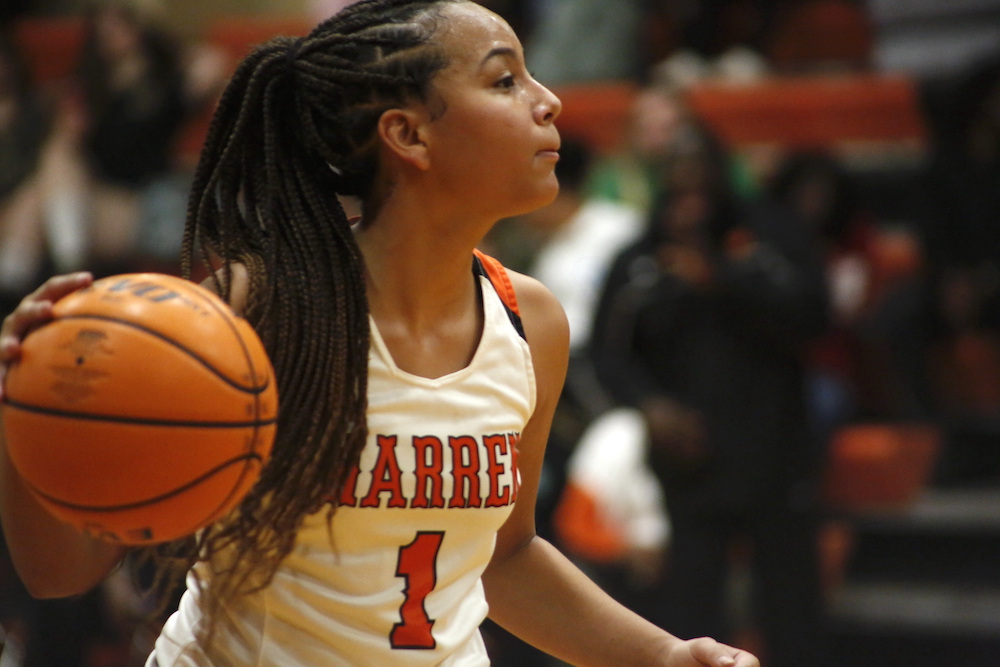 Warren, Arkansas – Warren’s Lady Jack Basketball team put on a gritty performance Monday night, November 15, 2021, as they took down non-conference opponent Rison by the final of 43-37 to pick up their first win of the season.

Coach Leon Harris’s Warren Ladies team, looking to bounce back from a opening game overtime loss to Pine Bluff, jumped out to an early first quarter lead over the Wildcats of Rison. Although things remained tight down the stretch, the orange and black never relinquished the high ground through four quarters of action. The game was a bit sloppy, with both teams turning the ball over a few too many times, but Warren was strong enough at the foul line and from beyond the three-point arc to secure the victory.

Two Lady Jacks reached double figures in the score column. Tyairean Bass led the line in points scored with 14 on the night. She had a much improved ballgame at guard, and acted as a steady hand and protector of the basketball in an otherwise scattered match. Bass’s play stretched the court several times, and her pace proved to be part of the undoing of Rison’s tough defense. Bass scored at least six points in transition.

Warren’s Keller Bigham, a Mississippi College commit, was just one point behind Bass on the scoresheet with 13. She set the tone for the Lady Jacks, hitting her first shot from long distance to give Warren an early 3-0 lead. Bigham was two of four from the free-throw line, but hit a momentum shifting three as the halftime buzzer sounded. She also made a crucial block with under ten seconds to go that really closed the game out.

Mylesha Yao also was a steady hand throughout the night at guard. She would score 7 and go two of four from the line.

Paris Wright contributed with 4 points for Warren, Tessa Andrus with 3, and Makiya Payne with 2.

With this win the Warren Ladies move to 1-1 on the season. They travel Tuesday, November 16, 2021 for their first road test, making the long haul north to Mayflower to take on the Eagles of Mayflower High. The Lady Jack game tips off at 5:00 p.m. CST, with the Warren boys game to follow.

Saline River Chronicle will be at both games and will have a full game report and photos Wednesday, November 17.