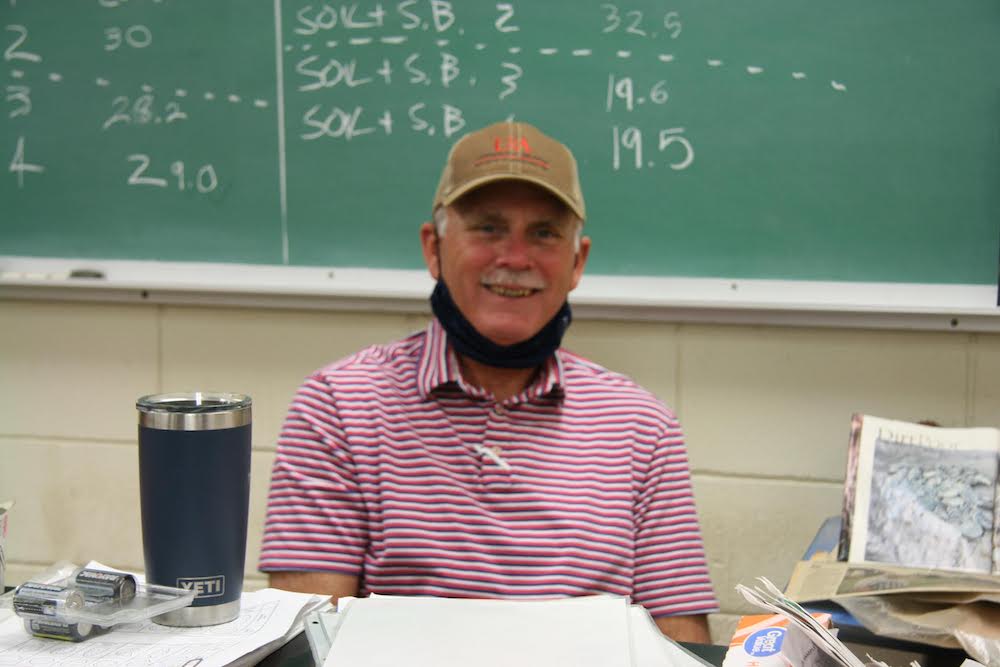 Monticello, Arkansas – What started with a plan to move on in five years turned into a three-decade love affair between Professor Paul B. Francis and the University of Arkansas at Monticello.

Francis is set to retire after 34 years at UAM and 37 years as an agricultural educator and soil scientist.

“I came to University of Arkansas at Monticello in fall 1987 on nine-month teaching appointment with a research appointment, pending grant money in the summertime,” he said. “I never intended to stay more than five years because I wanted to move to a bigger university with a 12-month teaching-position.

“I’ve been here ever since,” Francis said.

Students are the key
“When I first came to UAM, the first thing that struck me was the students,” he said. “They are all hard-working students. The majority, approximately 70 percent of them, are the first ones in their family to get a college degree. The majority of them come from low-income families. I felt I was doing something worthwhile with my life.”

Francis was not only impressed with the students but also the faculty at the College of Forestry, Agriculture and Natural Resources.

“I’ve never been disappointed with the people I’ve worked with; they have all been good, dedicated people,” Francis said. “That’s one thing about UAM that has impressed me. The faculty cares about the students and really wants to see them develop.

“To me, there is nothing more meaningful than to be at a professional meeting and meet a former student who is very successful in their field and have them come up and visit about their times here at UAM, and to know that I might have had a little bit of influence in the success of their career,” he said.

Pathway to agriculture
Francis, who turns 65 in May, was born in Memphis, Tennessee, and later moved to Bettendorf, Iowa. He’s worked on farms since he was 14.

“Lots of my friends and I worked on farms. That’s how I got into agriculture. I enjoyed the smell of soil. Freshly tilled dirt in the spring. I like watching things grow, working around farmers, and I liked the outdoors, and that got me into this career as a plant and soil scientist.”

Francis said he’s been blessed to do his research for the University of Arkansas System Division of Agriculture. The split appointment has allowed him to venture into tomato research, nutrient uptake, forages, bio-stimulants and agroforestry. Francis said, “The studies I’ve been doing with my colleagues on improving irrigation efficiency on crops I think is something I’ve enjoyed most. We do have a groundwater crisis in many counties of the state. Trying to develop ways of improving our groundwater use in crop efficiency and use of water is something I’ve enjoyed over the years.

Keeping students engaged in school is one of his biggest challenges.

Francis said, “about a third aren’t prepared for college. About a third are very well prepared. And the final third fall in the middle and need to be encouraged.” Francis said. “You have to work with them and get them enthusiastic because it’s all about their attitude to be successful. If they can develop the attitude that they are going to make it, they WILL make it!”

“We’ve always been good at placing students in career agriculture because, let’s face it, we’ve all got to eat,” Francis said. “Technological developments that have occurred in crops and agriculture, in general, has been phenomenal, particularly the last 10 years. It’s an exciting time to be in agriculture. The face of agriculture is changing at a very rapid pace.

People are what Francis will miss most.

“When I come to work and to be able to make a difference in people’s lives, or trying at least, seeing the reaction of some of the students and parents at the commencement. When the student, spouse, or friend is getting their degree, and to see the joy that overcomes them. I’ve been here; I’ve cried a lot with parents at commencement. Those are tears of joy. You can’t put a price tag on that.”

About the College of Forestry, Agriculture and Natural Resources and the Arkansas Forest Resources Center

About the Division of Agriculture