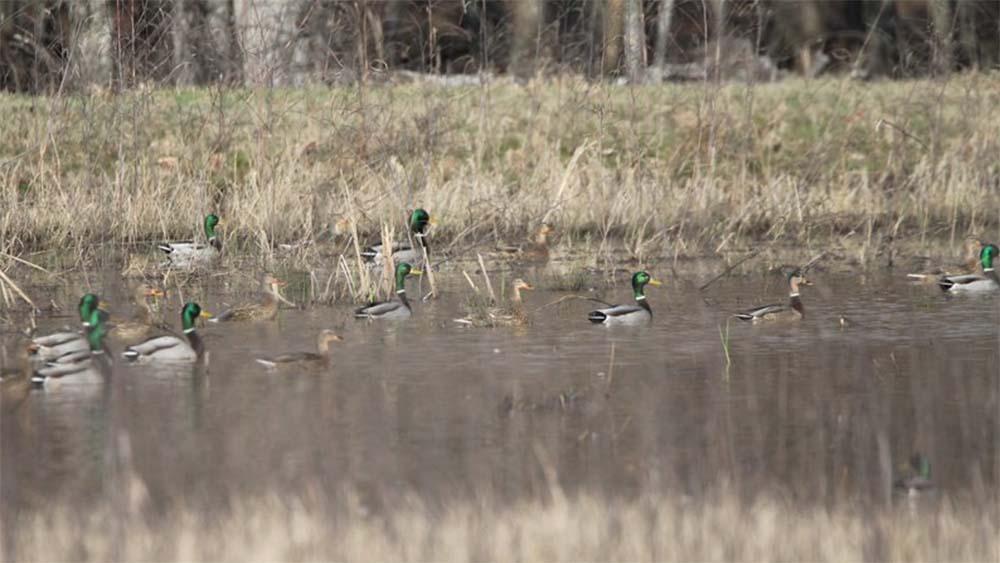 Little Rock, Arkansas – As this week’s Waterfowl Report was being composed Wednesday morning, an usual sight was occurring: A steady rain was falling. Tha’s the best news for duck hunters in some time around these parts. The hope among most hunters is that this first line of rain passing through Arkansas at midweek won’t be the end of it, and maybe at some point over the weekend, winter’s temperatures will finally arrive, too, pushing out the lingering mid-autumn conditions.

Dry and warm are words that don’t equate to good duck hunting, and that’s being experienced in neighboring states as well.

The AGFC’s December aerial survey of waterfowl revealed the second lowest number of mallards and all ducks since the surveys began in 2009. The survey team will be back in the air on Monday, Jan. 3, through midweek next week to see if anything has improved.

Arkansas’s neighbors don’t seem to be faring any better in overall expected duck numbers and mallard numbers, based on their recent surveys.

The Mississippi Department of Wildlife, Fisheries and Parks had its waterfowl aerial survey team in the sky Dec. 13-16, finding that “Wetland habitat availability was again well below average for much of the Mississippi Delta, with very little rainfall occurring since the November survey.” Like Arkansas, shallow, seasonal water was still not widely distributed, and much opportunity remained for private landowners to capture rainfall with water control structures as fall and winter continued. In Mississippi, flooded habitat availability was greatest in the northeast portion of the Delta. As a result, total duck abundance estimate for the Mississippi Delta was below the long-term average for December surveys, as were the individual estimates for mallards and other dabbling ducks.

If your desire was for diving ducks, like ringnecks, those estimates were well above their long-term average for this time of year; divers made up about 50% of all duck observations.

Interesting, in some precision-leveled fields with a little water in east-central Arkansas, just south of Lodge’s Corner, observers noted those fields being covered up in diving ducks rather than dabblers.

Missouri’s report from the same week, Dec. 13, revealed little change from its report two weeks earlier and noted unseasonably warm temperatures and the need of precipitation, with about 38 percent of the state “abnormally dry.” “Good habitat continues to be limited due the lack of rain and with dry conditions ducks have little reason to pioneer from refuges or other undisturbed areas in search of food,” Andy Raedeke’s report read. A cold front Dec. 6-8 failed to push in an influx of new ducks, he added.

Missouri typically reaches statewide peak duck numbers during the last week of November and the first week of December, and has reached that peak at that time 10 of the past 20 years, reaching it later in December only three times. Southeastern Missouri should at times see slight increases in ducks later in the season, and its season runs concurrent with Arkansas’s.

In lieu of any better duck numbers, we turn to the National Weather Service for hopes of better finish to the 2021-22 season. The potential for strong to severe thunderstorms was expected through Wednesday evening and again Friday evening through Saturday morning, although actual rainfall total predictions were not forthcoming.

Jason “Buck Jackson, the AGFC’s wetlands program coordinator, said the state was in need of a lengthy 4-inch-or-more rain event to bring the duck habitat up to a level that would be more inviting to migrating waterfowl.

“It’s the same deal it’s been. We need a fast 4-inch rain. That way we get some runoff,” Jackson said Wednesday as the latest storm front approached central Arkansas.

Water, more than colder weather, has been the biggest need, biologists say. But a stronger cold front and upper-level storm system will approach central Arkansas on Friday, which would provide another opportunity for strong to severe thunderstorms to develop, according to the NWS. So, Arkansas might get the rainfall it needs, but most waterfowlers also know that ducks tend to scurry on in front of heavy thunderstorms. Windy conditions will be seen across the state in advance of and behind the front Friday, with wind guys possibly approaching 30 mph Friday and Saturday, the NWS says. Cold air will rapidly build in behind the front with Sunday morning lows falling into the teens and 20s across much of Arkansas. When northwest winds are factored in, the NWS reports, wind child values could be as cold as 0 degrees to minus-5 degrees across northern Arkansas.

Four of the six units in Red Cut Slough at Cypress Bayou Wildlife Management area have been pumped up to 85 percent water coverage as of earlier this week,  according to the AGFC’s Jacob Bokker. Red Cut Slough hunting is available via permit, and for weekends hunters must acquire the permit through the AGFC’s online draw system. Tuesday and Thursday hunting is available by permits obtained onsite. Cypress Bayou has some huntable water and is available all week without a permit.

Hunters are still awaiting more water to make George H. Dunklin Bayou Meto WMA more huntable (or to spread out the hunters more to make it a better hunt, especially on weekends). The AGFC’s Mark Hooks reported Tuesday, “The Bayou Meto main GTR area is generally holding at 178.4 feet msl or so as of Tuesday afternoon, with the possibility that this next rainfall would improve that.” At 179 feet msl, Bayou Meto has “good huntable water” and all the boat ramps are accessible.

Remember that to participate or land a permit for either the AGFC’s managed waterfowl areas that offer permit hunting or to enter the drawing for an Arkansas WRICE program field for Saturday and Sunday, Jan. 1-2, you’ll need to apply this week between Thursday at 3 p.m. and Sunday at midnight. This also includes permitted days on WMAs during the week of Jan. 4-6. Permit hunts are offered on Steve N. Wilson Raft Creek Bottoms WMA, the Red Cut Slough tract at Cypress Bayou WMA, the Conway George tract at Sheffield Nelson Dagmar WMA and Freddie Black Choctaw Island West Unit WMA. And AGFC has up to 45 privately owned flooded rice fields available to hunt by permit through its special duck hunting application process via the Arkansas WRICE program. Most of the landowners in the WRICE program who had blinds on-site have upgraded the blinds for a better hunting experience.
Visit https://www.agfc.com/en/hunting/migratory-birds/waterfowl/special-waterfowl-permit-hunts to learn more about these special duck-hunting opportunities and to apply.