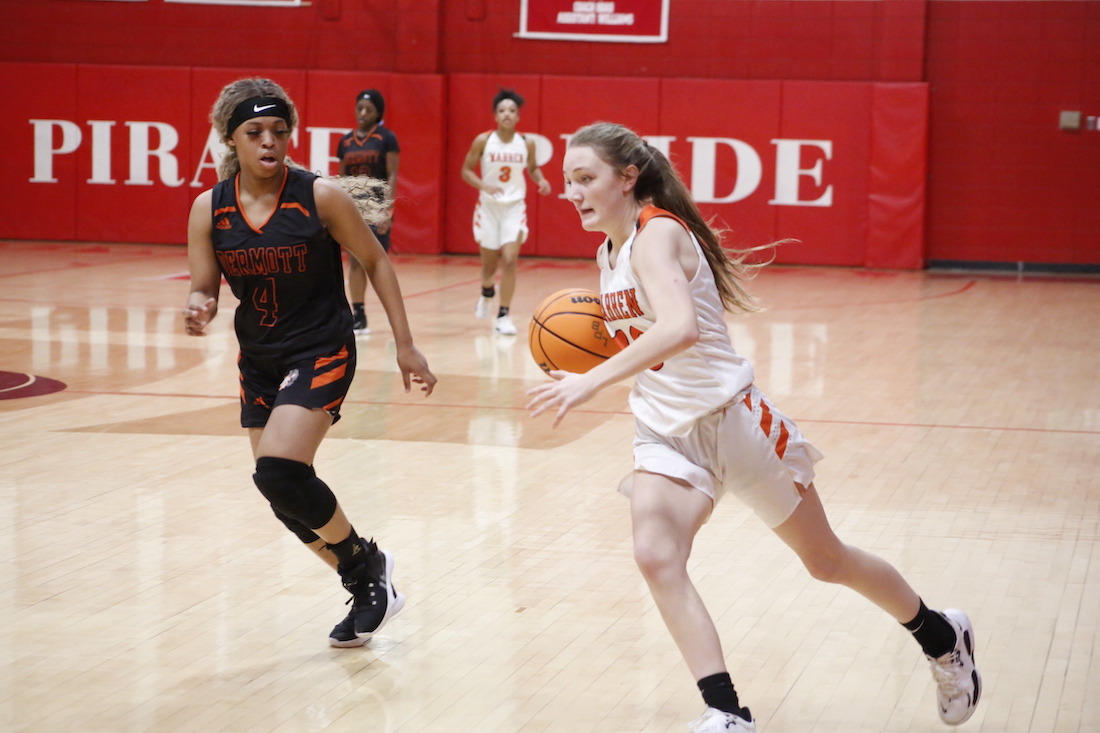 Monticello, Arkansas – Returning from their holiday break, the Warren Lady Jack Basketball team featured in the opening round of the Commercial Bank SouthEast Arkansas Holiday Tournament at Drew Central High School Tuesday afternoon, December 28, 2021, dropping a game to Dermott by the final of 46-23.

Warren came into the ballgame with an overall record of 5-4, having last played on the road at Pine Bluff, December 17, winning that game by the final of 44-37.

The opening quarter saw Warren jump out to an eight point lead off the back of a strong offensive effort by Tessa Andrus. She sank eight of Warren’s opening ten points in the first period. Dermott’s Lady Rams did claw back to trail by only four after the first quarter buzzer sounded. Warren led 10-6.

The strong opening period offensive play that handed Warren the early lead dissipated in the second, as the orange and black struggled to find much offense. Point guard Tyairean Bass was the lone Lady Jack to record a basket in the period. A big part of the offensive struggles must be credited to Dermott’s full court press, which forced several turnovers and really changed the tide of the game. Warren went into the halftime break down 17-12.

Dermott opened a decisive lead in the third quarter, still in part due to the full court press. Warren would go on to fall to the Lady Rams by the final of 46-23.

Tessa Andrus had perhaps her best game on the season. She contributed eight points and knocked down a three in the first quarter.

Three other Lady Jacks made it on the scoresheet. Tyairean Bass and Ana Tinoco both scored two, and Mahiya Payne had one.

The loss brings Warren to 5-5 on the year, but they get a chance for a sixth win Wednesday afternoon at 12:40 p.m. when the Lady Jacks will take on the consolation portion of the Tournament bracket.