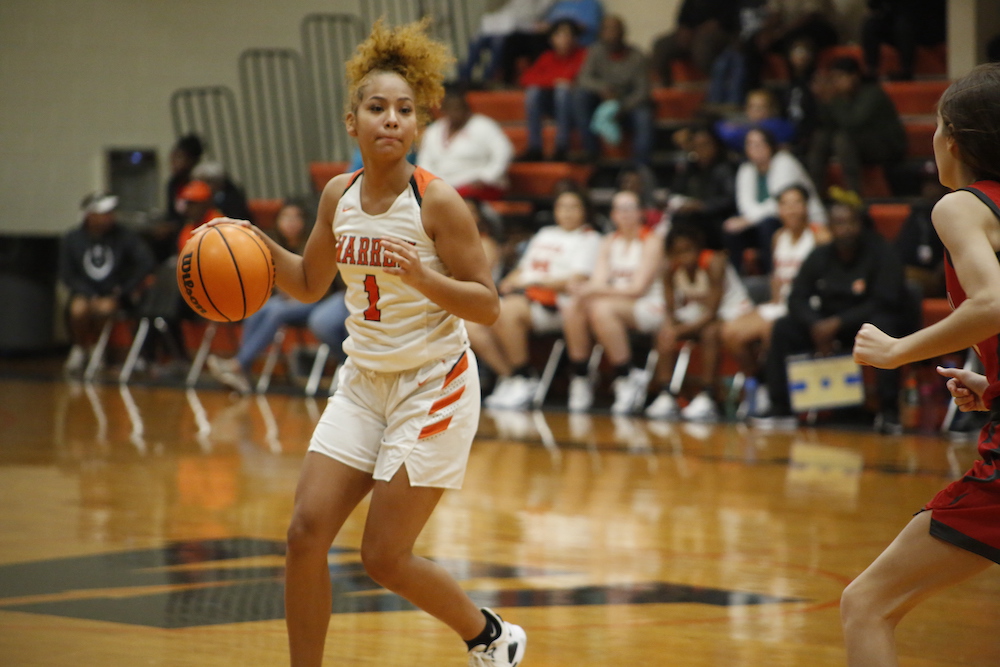 A hard fought battle ended with the Warren Lady Jacks dropping a game to the Drew Central Lady Pirates Thursday night, December 2, 2021 by the final of 47-31, in a game that was much closer than the final scoreline indicated.

Drew Central jumped out to an early first quarter lead off the back of a couple of shots from beyond the arc. Warren however responded well, cutting it to a two point game by the end of the first at 8-6 Drew Central.

The Lady Jacks found some rhythm in the second quarter, with two of Warren’s most consistent offensive players taking the baton. Paris Wright was able to get to the free-throw line, hitting three of four. Keller Bigham found her groove, scoring 11 in the second. Wright and Bigham’s input helped Warren to retake the lead. Warren in fact had a seven point advantage at one point midway through the second period. Drew Central did make a late quarter push, clawing their way back and going into the half down just one. Warren led 20-19 at the break.

Drew Central outscored Warren 10-6 in the third quarter to retake the lead at 29-26.

Foul trouble in the fourth caused issues for the Lady Jacks, as their two leading scorers, Bigham and Wright both recorded their fifth fouls of the night and were forced to the bench. Warren also lost Tessa Andrus and Ana Tinoco, as both fouled out late. Drew Central went on to win by the final of 47-31. The loss takes the Lady Jacks to 3-3 on the season.

Keller Bigham led Warren with 16 points. She had one three for the night. Bigham continued her excellent form from the free-throw line, going five for six.

Paris Wright also had a three on the night and went three for four from the line, scoring 10 total.

Warren did struggle in scoring distribution, as Mylesha Yao was the only other Warren player on the scoresheet. She scored five, going two of three from the line.

The Lady Jacks are back in action next against Fordyce in Warren Monday, December 6. The junior series of games, which includes the 7th grade girls and Junior Jacks, are start at 5:00 p.m with the senior game to follow.

Top photo: Mylesha Yao(1) sets up the Warren offense during the first half of Warren’s game vs. Drew Central.