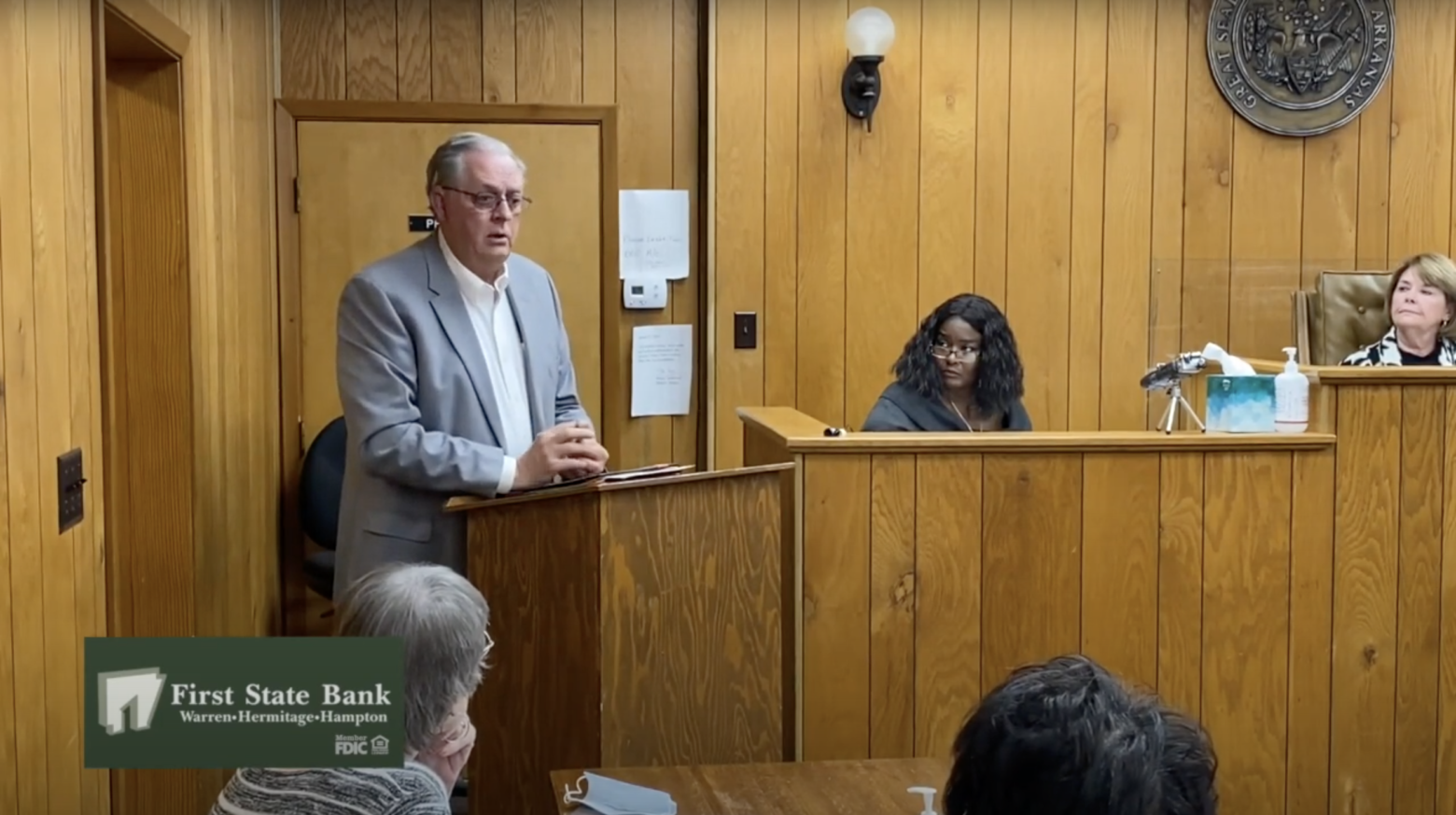 Warren, Arkansas – Four of the six Warren City Council Members were present Monday evening, December 13, 2021 for the regular monthly city council meeting.  A number of issues were acted upon, including the adoption of the 2022 city budget in the amount of $7,063,574.22. Beginning the meeting, Mayor Pennington submitted the November 2021 financial reports and stated the city sales tax revenues remain strong.  The Mayor gave the report in the absence of City Clerk Helen Boswell who is recovering from surgery.  Mrs Boswell is working from her home.

The Mayor then nominated Roger George to another six year term on the Intermodal Authority.  The council confirmed the appointment.  The council then approved an emergency purchase of a new truck for the Parks and Recreation Department and authorized the old truck to be sold.  Next the council voted to make June 19 an annual holiday for the city of Warren.

Dr. Robert Smalling, President of the Bradley County Economic Development Commission addressed the council and provided a handout listing the various activities the Commission has been involved in over the years.  The Commission is seeking funding from the city.  Council Member Zack Burks asked Dr. Smalling how much the city has paid the BCEDC over the years.  Dr. Smalling indicated he did not know.  No action was taken by the council.

Scott Richardson addressed the council relating to speed brakes that have recently been installed on a portion of Cedar Street.  He owns a business on the street and stated he felt the council should reconsider the action taken.  He said a number of people do not want the speed breaks left on the street.  Kerrie Bryan and Brittaney Bennett also spoke and stated the speed brakes make the street safer for the people and children that live on the street.  They indicated there is too much speeding in the area. The council voted to refer the matter back to the street committeeto investigate the matter and the need.

The council was informed that two new police officers have been hired.  Jammie Leigh Smith and Terrance L. Vaughn have been approved by the Civil Service Commission.  Both will be required to attend the Law Enforcement Academy.

Acting Fire Chief Larry Hayes gave a comprehensive department report.  It was then announced that the Civil Service Commission had approved Nicholas Drake Dunaway as a volunteer fireman and Ray “Chuck” Moore as the new Warren Fire Chief.

Upon approval of the 2022 budget, the fire chief salary will be set.  That was done later in the meeting.

In other action the council voted to purchase a new fire engine and equipment and to finance the purchase which will be over $340,000.00.  Financing will be considered at the January 2022 meeting.

After a detailed explanation of the proposed 2022 city budget by Ways and Means Chairperson Council Member Henderson, the council adopted a resolution setting the 2022 budget in place as of January 1, 2022 and another resolution setting the salaries of elected officials for 2022.  No raise was provided for city council members.

Parks and Recreation Director Kyle Wagnon reported on all city recreation facilities and minutes of all city boards and commissions that met during November were submitted for council review.  This included the Water and Sewer Commission and the Warren Housing Authority.

Next, the council set the membership of all city council committees for 2022.  There were no changes.