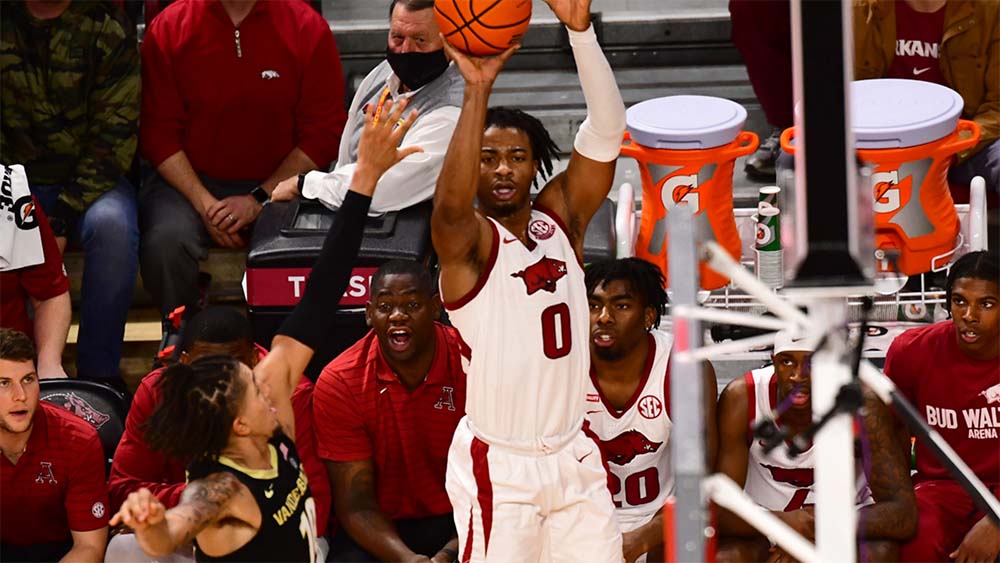 Fayetteville, Arkansas – Arkansas had four chances inside the final 15 seconds to tie the game or take the lead but could not convert in a 75-74 loss to Vanderbilt Tuesday night at Bud Walton Arena.

Scotty Pippen Jr., the SEC’s scoring leader, led the Commodores with 22 points, including 9-of-12 at the free throw line. Trey Thomas made two key 3-pointers late in the game and finished with 15 points, making 5-of-7 from 3-point range.

The loss spoiled strong offensive performances by Razorbacks Stanley Umude and Au’Diese Toney. Umude, who scored 19 in his last game, topped that with a season-high 28 points – his 32nd career 20-point game – while Toney scored 20 points, his best point production as a Hog and his seventh career 20-point game.

The Razorbacks were down five, 75-70, with 26 seconds left. JD Notae had an old-fashion 3-point play to make it a two-point contest. Chris Lykes came through with a steal on the ensuing possession and missed the layup. However, he was fouled getting the offensive rebound. He sank the first free throw to make it a one-point game (75-74) but missed the second. Once again, Lykes came up with an offensive rebound. The Hogs had a good look from 3-point range but came up short.

The Commodores missed a pair of free throws with nine seconds left. Arkansas missed a jumper inside of five seconds but got the ball back with 1.2 ticks on the clock. Arkansas had a good final look for the game-winner, but the ball rimmed out as the buzzer sounded.

Notae finished with 16 points, five assists and five steals. Notae ranks second in the SEC in scoring while leading the league and ranking seventh in the NCAA in steals. Jaylin Williams, one of the league’s top rebounders, had his third double-digit rebound outing with 10, including eight on the defensive end,

Up next, Arkansas hits the road to face Texas A&M on Saturday (Jan. 8). Tipoff is set for Noon (CT) and the game will be televised on SEC Network.