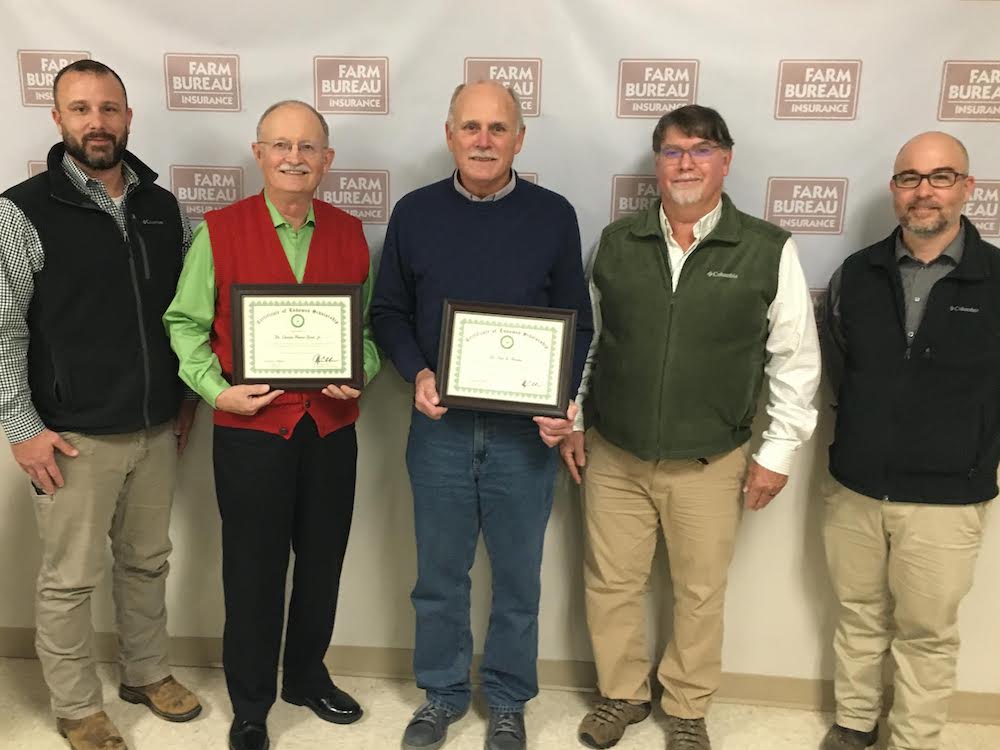 Both organizations have endowed scholarships in the names of the two professors. Both retired last year from UA-Monticello’s College of Forestry, Agriculture, and Natural Resources after long careers at the campus. Francis spent 33 years teaching agronomy and horticulture subjects, while Stark taught agricultural economics subjects for nearly 25 years.

The scholarships were presented as a surprise at the Drew County Farm Bureau Christmas party.

Drew County Farm Bureau Manager Mike Zieman said, “Stark was a sponsor for the Collegiate Farm Bureau Chapter, where he was involved in recruiting of agriculture students and acknowledging how Farm Bureau works on the political side.”

Of the five collegiate Farm Bureau chapters in Arkansas, Zieman said UAM is the most active, noting the number of students who attended the national convention. “Ninety percent of that participation is due to Drs. Francis and Stark,” he said.

Stark said the collegiate chapter was started because the Farm Bureau wanted to establish a connection with students coming right out of high school, and Arkansas was one of the first in the nation to start a chapter.

“I jumped on it because I saw it as a great opportunity for our students to establish connections in the agriculture industry at the local, state, and national levels, provide opportunities for career explorations, and just general connection with the agricultural industry,” said Stark.

Before the Farm Bureau announcement, Francis had established an endowed scholarship with funds he donated and gathered. The Farm Bureau will contribute to that fund, raising the financial aid the scholarship can provide.

The agriculture faculty will choose the Francis and Stark scholarships recipients and the UA-Monticello College of Forestry, Agriculture and Natural Resources, Dean Michael Blazier.

“I’m thrilled by the Farm Bureau scholarships. Farm Bureau supports agriculture and rural communities and allows me to belong to a cause I believe in,” Francis said. “Young people in agriculture-related careers should get involved because Farm Bureau is a powerful lobby in Arkansas with the most influential leaders in the agriculture community. They should be proactive.”

Both Stark and Francis encouraged students to apply for these scholarships, which can be done through the UAM Financial Aid office.

Weaver said, “The Farm Bureau has given UAM annual scholarships for at least five years if not more,” said Jeff Weaver, UAM vice chancellor for advancement. “Those monies are passed to students directly on a one-time basis, but these are the first endowed scholarship from the Drew County Farm Bureau, meaning that they will live on forever. “

“When professors dedicate their careers to our university and our students, we need to rightly recognize that, and we thank the Farm Bureau for recognizing the excellent faculty we have, Weaver said. “UAM was founded as an agriculture school; it will always be a big part of our university, as it should be,”