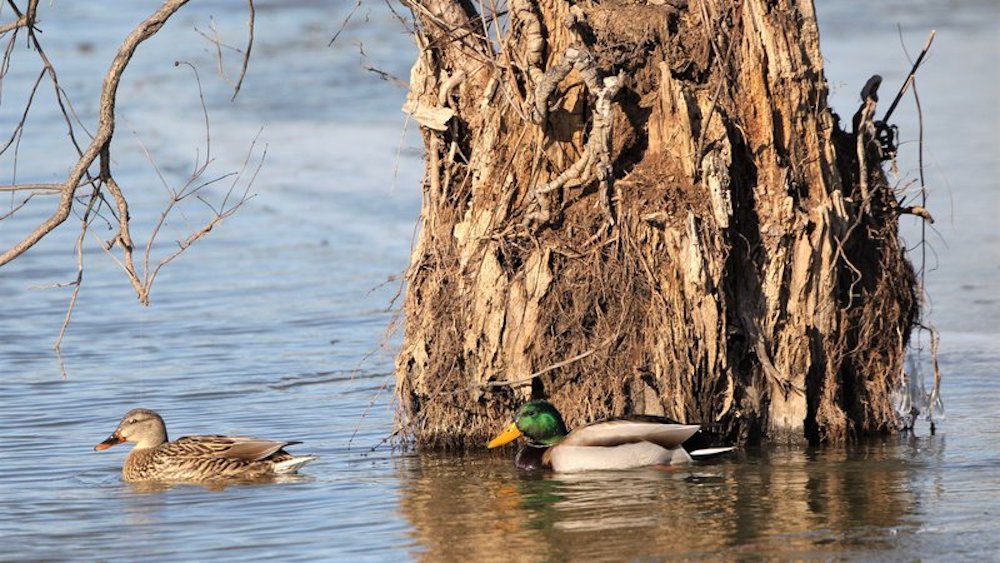 Little Rock, Arkansas – With a deep freeze headed toward Arkansas, snow expected to be covering southeast Missouri, and with the recent rainfall that has filled the public hunting areas in state, habitat conditions for duck hunters should this weekend be the best they’ve been all year long.

Friday and Saturday morning, waterfowl hunters may find themselves breaking ice to open a hole with temperatures expected to drop into the teens overnight both Thursday and Friday nights. There will be a light warming on Saturday through the day, and sunny to partly cloudy conditions are expected.

“You couldn’t ask for better conditions over the last 12 days of the season,” Trey Reid, Arkansas Game and Fish Commission assistant chief in the Communications Division and host of “Arkansas Wildlife TV,” said Wednesday.

Anecdotallly, reports have varied from outstanding duck hunting for some waterfowlers, to others noting their duck hunting and duck sighting as being way off from recent years. It may depend simply on where you’re hunting now.

The January Midwinter aerial survey conducted by Arkansas Game and Fish Commission waterfowl biologists two weeks ago indicated a big jump in mallards over the December count (from about 326,064 mallards in the Delta to more than 617,000 estimated in early January). The greatest concentration of mallards in Arkansas were estimated the in the Delta in the Bayou Meto and Lower St. Francis survey zones. In fact, over half of all mallards in the Delta were in these two survey zones. Duck and mallard density maps (available on agfc.com) show this distribution pattern, with duck hotspots generally mirroring mallard hotspots.

More anecdotal reports noted successful hunting in George H. Dunklin Jr. Bayou Meto WMA, thanks to recent rainfall lifting the water levels throughout the area to optimal duck hunting conditions. Northeast Arkansas and eastern Arkansas have seen a good number of ducks, according to some private land hunters. Duck numbers are picking up some in the Arkansas River Valley and around Ed Gordon Point Remove WMA with it being nearly or completed covered in ample water. The aerial survey two weeks ago showed mallards were somewhat evenly distributed among four survey zones in the Arkansas River Valley: East Dardanelle Reservoir, Holla Bend, Petit Jean and Point Remove Plumerville.

The AGFC’s aerial survey team is back out this week for its second January survey, with results expected after the weekend.

Last weekend, 355 applications were received for the Arkansas WRICE program’s public permit hunts on private rice fields, a high for the year. Hunters are still focusing much of their attention on landing a spot in Jefferson County around Altheimer and Humphrey, in the vicinity of Bayou Meto WMA, but there is interest throughout all of the 40-plus fields available. The 2021-22 WRICE Weekly Application Numbers link also includes locations for each field being used this year and more information, such as if the blind can be accessed by all-terrain vehicle. he numbers of applicants per WRICE field through the Jan. 22-23 weekend are available with a link on that page as well Wabbeseka A fields.

This week, from 3 p.m. Thursday to midnight Sunday, marks the final application process period for the regular duck season (youth hunters, veterams and active military may still apply next week for permits for their second special hunt day Feb. 5). The regular season ends Monday, Jan. 31, and all-day hunting will be allowed on all WMAs for the final day, as well as for the Feb. 5 special hunt for youths, veterans and military.

To participate and win a permit for either the AGFC’s managed waterfowl areas that offer permit hunting or to enter the drawing for an Arkansas WRICE program field for Saturday and Sunday, Jan. 22-23, you’ll need to apply this week.Permit hunts are offered on Steve N. Wilson Raft Creek Bottoms WMA, the Red Cut Slough tract at Cypress Bayou WMA, the Conway George tract at Sheffield Nelson Dagmar WMA and Freddie Black Choctaw Island West Unit WMA. And AGFC has up to 45 privately owned flooded rice fields available to hunt by permit through its special duck hunting application process via the Arkansas WRICE program. Most of the landowners in the WRICE program who had blinds on-site have upgraded the blinds for a better hunting experience, and some have ATV access to the blinds and flooded fields.
Visit https://www.agfc.com/en/hunting/migratory-birds/waterfowl/special-waterfowl-permit-hunts to learn more about these special duck-hunting opportunities and to apply.