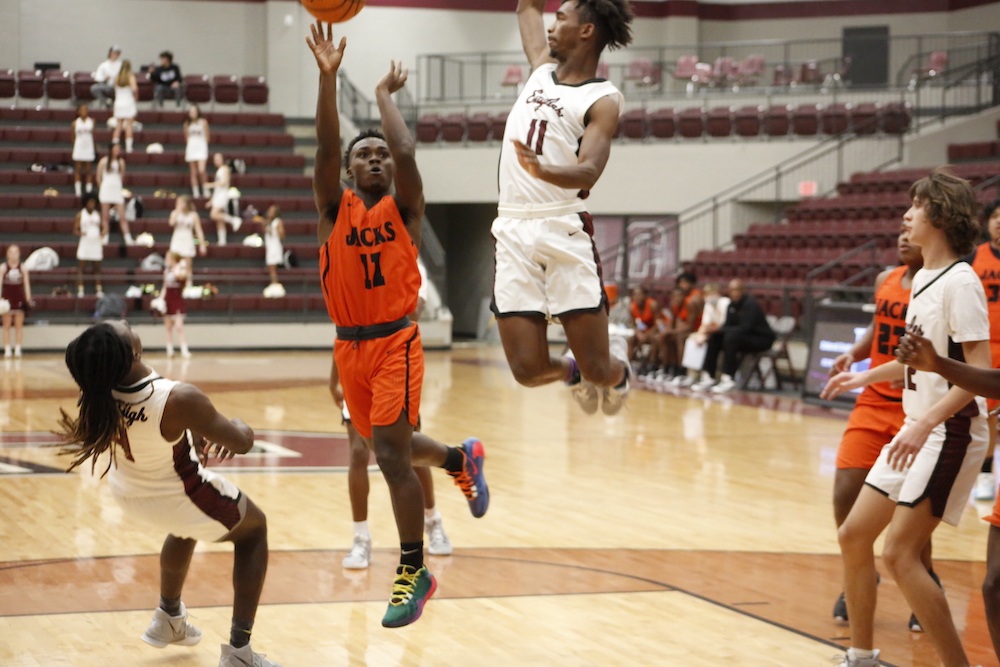 Matthew Powell hits a jumper late in the fourth quarter to bring Warren to within striking distance of Crossett.

Crossett, Arkansas – Warren High School’s men’s basketball team put on perhaps their best performance of the season thus far Tuesday night, coming up just short against Conference 8-4A opponent Crossett by the final of 58-56 on the road.

The Lumberjacks came into the ballgame 2-9 overall after a tough couple of games last week went the wrong way on Warren. However, nobody can fault the fighting spirit and toughness shown by Warren’s men on the court Tuesday evening.

Things looked a bit iffy after the first quarter, as the orange and black could only muster 10 points in the opening period. Crossett on the other hand couldn’t seem to miss. The Eagles stretched the Warren deficit to 11 by the end of the first quarter of play, as they led 21-10.

Things were quite different from that point on, as Warren came to life in the second quarter. Five different Lumberjacks got on the board in the second, as the woodsmen outshot Crossett 22-13 in the period. Warren even took a lead towards the end of the quarter. At the halftime break Crossett led Warren by just two at 34-32.

Coach Joseph Anders’s Jacks matched Crossett shot-for-shot in the third. Going into the fourth the Eagles led the Lumberjacks 46-44.

The story was much the same in the fourth, as Warren made life tough for the home team. With 35 seconds to go Crossett led 57-54. Warren would even have a chance to tie things up, but a final shot was blocked as the buzzer sounded. Warren fell by the final of 58-56.

The loss brings Warren to an overall record of 2-10. The Lumberjacks are now 1-4 in conference play. Crossett moves above Warren in league play. The Jacks sit a spot above Hamburg who are now 0-4.

Matt Powell led Warren with 15 points on the night.

Isaac Richey was just a point behind Powell with 14.

Jordyn Ingram scored eight and Benjamin Escamilla and Jalen Lee each had four a piece.

The Lumberjacks will feature against Monticello at home Friday.

There was no Lady Jack game played Tuesday due to COVID issues at Crossett according to the information Saline River Chronicle has received.