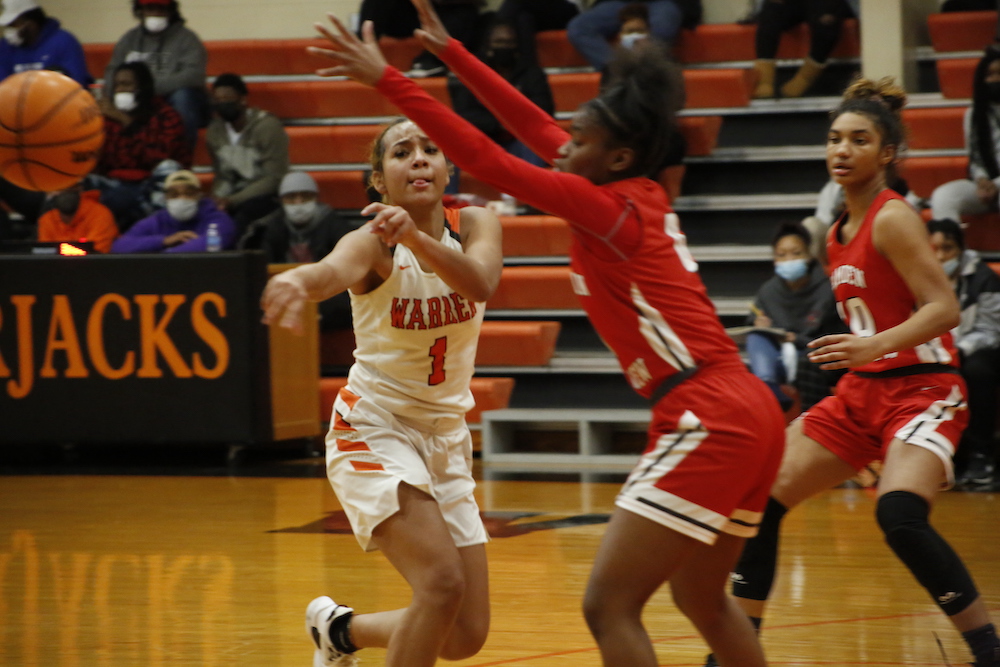 Taking to the court for the first time since December 29, the Warren Lady Jack basketball team dropped their 8-4A Conference opener to the Camden Fairview Lady Cardinals in a photo finish at the buzzer by the final of 39-36 Thursday night, January 20, 2022 at home in the Seminary Street gym.

Warren’s girls came into the ballgame with an overall record of 5-6 on the year, having last made an appearance in the Commercial Bank Southeast Arkansas Holiday Tournament at Drew Central just after Christmas. From what Saline River Chronicle understands, COVID protocols were the reason for some of the recent cancellations.

The Lady Jack’s came out firing on all cylinders in the first quarter. Five Warren players got on the scoreboard in the opening period. Points from Paris Wright, Keller Bigham, Mylesha Yao, Tessa Andrus, and Tyairean Bass helped the Lady Jacks grab the upper hand early, as Warren took a 16-15 lead into the first quarter break.

While Camden Fairview’s Lady Cardinals didn’t light up the board in the second quarter, an offensive drought for the orange and black saw the Cardinals retake the lead before the midway point. Warren’s only points of the second quarter came from two Tyairean Bass free-throws. Fairview carried a 21-18 lead into halftime.

Warren picked up the defensive performance in the third, but another tough quarter in the third only delivered eight points for the Lady Jacks. They went into the final quarter down 30-26.

Credit to Coach Leon Harris’s Lady Jacks, they kept in the fight with some scrappy play. With 2:41 to go the Lady Jacks found themselves down just one point at 33-32. They soon took the lead by one. Fairview would retake the lead once more on their next possession, and with 25 seconds left they went up by three at 39-26 after a loose ball was picked up underneath their goal and banked in. Warren did get one final shot as the buzzer sounded, but it didn’t fall. The Lady Jacks lost by the final of 39-36.

Warren senior Keller Bigham recorded her twelfth game in a row this season posting double figure scores. She led the Lady Jacks with 12 points on the night, two of which came from the free-throw line.

Guard Tyairean Bass trailed just behind Bigham with seven in the game against Camden Fairview. She also had one three.

The Lady Jacks move to 5-7 on the year. This is their first 8-4A game of the season, where they now have an 0-1 record. Warren does however have several games in hand due to postponements. For the time being they are near the bottom of the 8-4A bracket with Crossett and Hamburg.

Magnolia and Star City lead the conference race, both with 3-0 records.

Top photo: Mylesha Yao(1) kicks a pass out to a teammate in the first quarter of Warren vs. Camden Fairview.