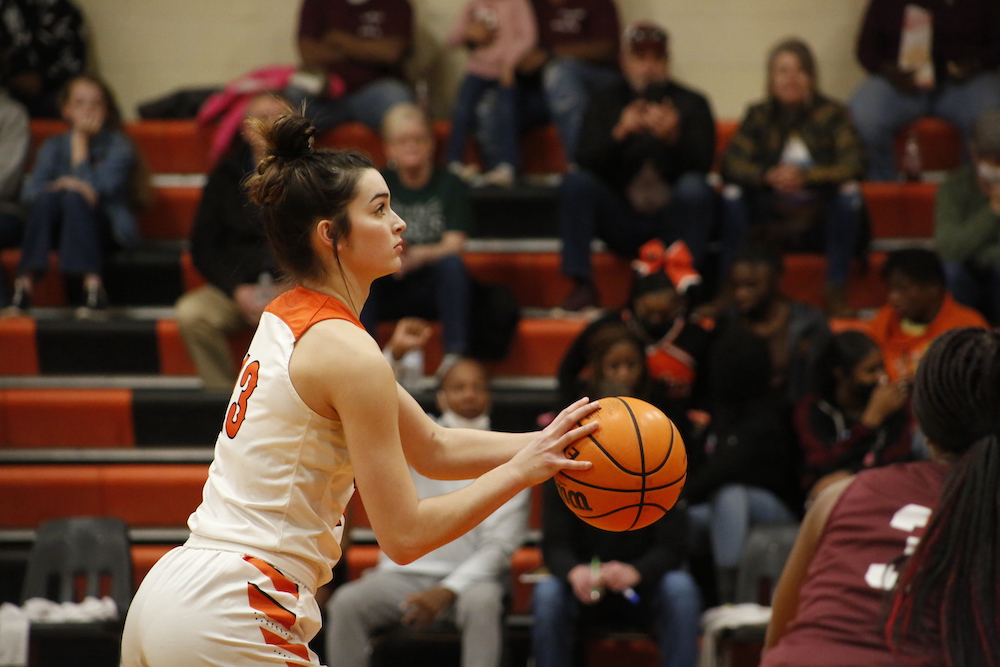 WARREN, Ark. – For the second time in four days the Lady Jack basketball team defeated the Crossett Lady Eagles, as the women from Warren handed the birds from down south a 51-38 loss at Warren’s Seminary Street gym Tuesday night, February 8, 2022.

After competing in five games in six days last week, Warren’s Lady Jacks came back from the weekend to put in a performance that pointed to a rested and refreshed group. Four Warren players scored from the floor in the opening quarter. Senior Keller Bigham led the way with ten points in the first, including a three. Tessa Andrus also hammered home a shot from distance as the orange and black took a strong 20-7 lead into the second quarter.

Warren would post another ten in the second and go on to win by the final of 51-38.

Keller Bigham capped off what had already been a big day for the senior, after officially signing Tuesday morning her letter of intent to play at Mississippi College, by leading the Lady Jacks with a stunning 31 points. The points total for Bigham also represents her twentieth game of the season going into double figures. Warren has played 21 games to-date. The 31 point game marks Bigham’s highest single-game points total since the beginning of the season. She scored 30 December 14, 2021 in a 43-39 win at McGehee.

Senior guard Tyairean Bass came close to the double digit landmark with eight points on the night against the Lady Eagles.

Tessa Andrus posted four points, and number 24 for Warren(that number is not on our current roster, we apologize) scored one.

The win improves Warren’s 8-4A Conference record to 3-7. The Lady Jacks are now 8-13 overall with five games to play before the end of the regular season. They travel to Hamburg Wednesday for a 5:00 p.m. game from a postponement in January.

Top photo: Keller Bigham(13), Warren’s leading scorer against Crossett with 31 points, takes a free-throw shot during the first half.