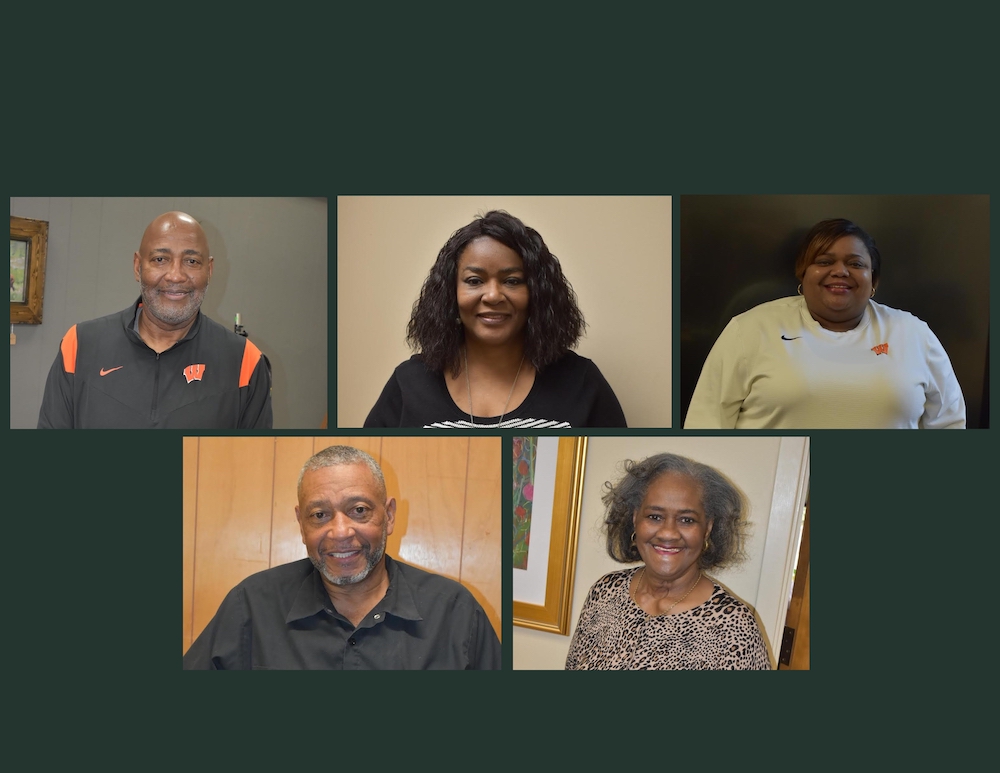 Editor’s note: The following are profiles of prominent African-American leaders in Warren, in honor of Black History Month in February.

Jerry Daniels has spent all of his 64 years in Warren, as he was born and raised here. A total of 44 of those years were spent as a logyard coordinator for Potlatch Corp. (now PotlatchDeltic). Daniels was in charge of the scales to the yard where trucks were unloaded.

There were 1,100 people employed at Potlatch when Daniels started. He retired a few years ago and there were less than 300 workers at that time. With modernization, quite a bit changed over his tenure at modern lumber facilities according to Daniels.

Daniels graduated in the Warren High School Class of 1976. He attended the University of Arkansas at Monticello for 1 ½ years.

“I came home from school and my dad told me he had a job for me (at Potlatch),” he said. His father, Napoleon Daniels, worked at Potlatch for 20 years.

Daniels has been married to his wife, the former A’Seneque Easter, for 40 years. They have a son, Patrick, and daughter, Ashley, who are both WHS graduates. Patrick was active in football and Ashley was a cheerleader and Homecoming queen. Ashley also has a 7-year-old daughter, Audrey.

“In 1989, I had an inkling to do something for the community,” Daniels said, so he ran for City Council but lost by 200 votes to Clint Huey. In the 1990-91 school year, he was elected to Warren School Board and he has been reelected ever since. He has served as board president since 2004-05 and is the longest current member.

A number of local educators approached Daniels and urged him to run for the School Board before the 1990 election. His father-in-law, the Rev. M.T. Easter, and James Hooper Sr. were previous African-Americans on the board. They were both encouragements for Daniels himself to step forward to serve.

Daniels had attended Thomas Brunson Elementary School, which was segregated at that time. It integrated in the sixth grade and he attended the former Bradley County High School, which became a junior high. “Integration wasn’t bad for me,” he said.

“I think what I missed the most was the tradition of Bradley County High School and what they provided for the community. Once you went from being a Wildcat to a Lumberjack, you kind of lost that tradition,” Daniels said.

Daniels however would go on to have an outstanding few seasons as a Warren Lumberjack on the basketball court. He featured from the 1974 season to the 1976 season.

His love of basketball continues to this day. Daniels began refereeing basketball in 1996 and hasn’t stopped since.

The Rev. Henry Cox is originally from Fordyce but he became the pastor of Union Hill Missionary Baptist Church in 2008.

He graduated from Thornton High School and received a bachelor of church ministry degree in 2009 from Sure Foundation Theological Institute. He also attended Southern Arkansas University-Tech for three years, attending business classes.

Prior to attending college, he served three years active duty and three years inactive duty in the U.S. Army prior to Desert Storm. He attended basic training at Fort Dix, N.J., AIT training at Aberdeen, Md., before being stationed at Manheim, Germany, and Fort Polk, La.

“I never saw any action because we were basically in peacetime,” Cox said.

He is married to Tangela Renee Cox. They have two children, Kilay T. Cox and T’nyia Cox, and 14 grandchildren.

Cox is the past president of Bradley County Ministerial Alliance. He founded the Fellowship of Churches Scholarship Fund in 2010. Now his church works with Bohemia Cares which offers activities for children including summer camps, Easter and bike giveaways and gives away turkeys during the holidays.

He said COVID-19 has caused the need for the church to do abbreviated services, with no funerals or weddings.

However, when restrictions ease, he is planning a men’s seminar on being fathers and leaders in the community. A women’s seminar and marriage seminar are also planned.

“There are some very personal issues and they need someone that they feel confident in and can trust. A church needs to be a place where people feel safe. We need to be sensitive to the needs of the community,” Cox said.

“Until you can change a person’s mind, you can’t change their life,” he added.

Charlotte Tenner-Brown was born and raised in Warren. She is the youngest of eight children born to the late Robert and Verlene Tenner. She is a member of Mount Carmel Baptist Church.

In 1987, Tenner-Brown moved to Los Angeles, Calif., for 10 ½ years. In 1997, she moved to Austin, Texas, for 11 ½ years. In 2010, Tenner-Brown moved back home to Warren. She has worked for Bradley County Medical Center as a patient representative, Warren Public Schools as a substitute teacher and Warren Police Department as a dispatcher. She is currently working as the administrative assistant to the Warren mayor.

Her work duties consist of first line of defense to the public, setting up commission meetings, managing System for Award Management, withdrawing monies from Delphi E-invoicing system, managing office equipment and supplies, keeping up with the city’s assets, managing insurance for the city of Warren properties, collecting monies from rental properties, renting out the city’s venues, being responsible for recording all public meetings, informing media of all public meetings, serving as the liason for the 2020 census, updating the emergency plan for the city and everyday administrative duties.

Tenner-Brown was married for 10 years. She has one daughter, Briana, and one grandson, Austin. She loves being with family and close friends, meeting people, relaxing, watching television, traveling and spending quality time with her grandson. She also has her own Avon business, is a member of Bradley County NAACP Branch No. 6002 and is a member of the Bradley County Health Foundation board.

Helen Boswell was born and raised in Warren. She received her early education in the Warren school system and her higher education in Pine Bluff, where she studied secretarial office practices. She worked for the Warren School District from 1971-1972.

She was married to Henry Boswell for 46 years. She has two sons, four grandsons and four granddaughters. She worked for Potlatch Corp. from October 1974 to June 2004 in sales, invoicing, accounts payables/receivables, logging, payroll and information systems.

Boswell started work for the city of Warren in January 2005 as administrative assistant to the mayor. She was appointed as city clerk by Warren City Council in June 2017. She was elected to the position of city clerk in 2018 for a four-year term which expires in December of this year. She is a member of Bradley County NAACP Branch No. 6002.

Daily work duties mainly consist of receipting all revenue that comes in, whether cash or check; making sure deposit tickets are done and monies are deposited into the bank within 24 hours. Invoices have to be checked daily to see if they are ready for payment; if so, they have to be properly coded by department and category. After checks are written, she has to sign in the absence of the mayor or treasurer.

She attends and takes minutes of all City Council meetings, Firemen’s Pension Board meetings, public hearings or other meetings which require an official city record, records minutes and properly files them. She provides reports such as financial statements, city and county sales and use tax, and overtime reports for council meetings.

Boswell is active in the Church of Christ. She enjoys spending time with her family and friends, reading and fellowshipping with her brothers and sisters in Christ.

Tiffany Gathen may hail from Monticello, but she claims to be a lifelong Lumberjack. She explained that although she has lived in Monticello her entire life, her parents, Thomas and the late Barbara Gathen, met and taught at Warren Junior High. Thomas taught there seven years and Barbara taught there 28 years.

“With them teaching and other family members teaching, I didn’t want to teach. I wanted to be a cardiologist. When I went into pre-med, I found my true interest was writing so I followed in the footsteps of my mom who taught English,” Gathen said.

“Education gets to touch the heart of a child,” she said, adding people still tell her great things about her parents.

“Even with the hardest days, it’s still rewarding,” she said. “When you see them succeed, it’s rewarding when they come back and say how you’ve impacted their lives.”

She is a member of Pilgrim Rest AME Church in Monticello, where she serves as the quarterly conference church secretary and Women’s Missionary Society treasurer. She has been a member of Alpha Kappa Alpha Sorority Inc. for 25 years.