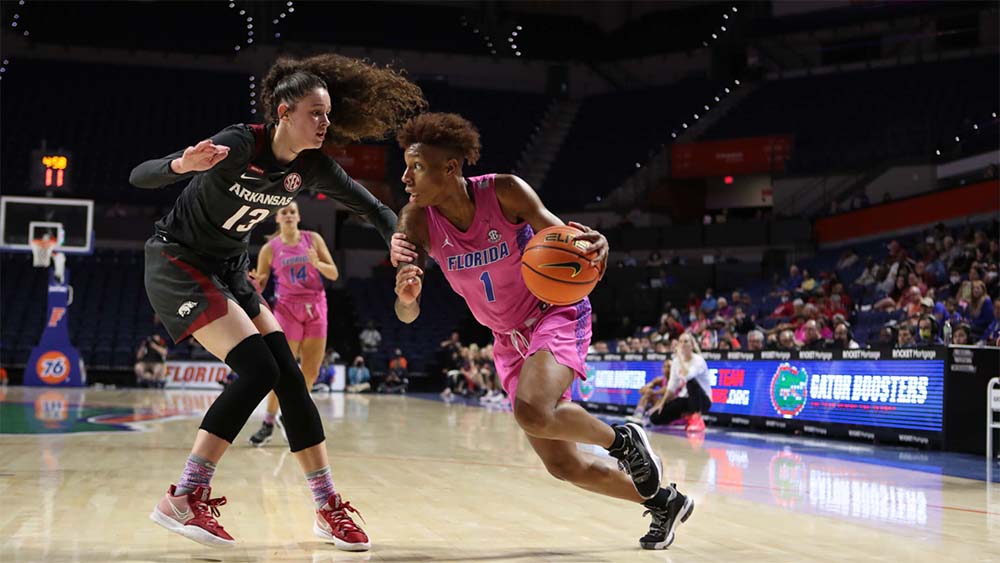 GAINESVILLE, Fla. – Arkansas Women’s Basketball (16-9, 6-6) had its two-game winning streak snapped on Thursday night in Exactech Arena, as No. 17 Florida (20-6, 10-3) downed the Hogs, 76-67. Turnovers were the story of the night – Arkansas came into the game averaging just under 11 per game, second best in the nation, but finished with 20, their worst mark of the season. The three-point shot was also a storyline in this one, as Arkansas, a normally excellent three-point shooting ballclub, only hit one its 13 shots from beyond the arc.

Outside of the turnovers, the Hogs’ offense was efficient – Head Coach Mike Neighbors’ squad shot 49 percent from the field. Reigning Freshman of the Week Samara Spencer led the charge once again, going for a team-high 19 points. Sophomore Sasha Goforth scored well in this one as well, going for 18 points.

This game was close through the first quarter, and the Gators beat the buzzer to end the frame up five. Goforth and company kept it close early, but the Gators started to really pull away in the second quarter, as they forced nine Arkansas turnovers. Ironically, Arkansas didn’t miss a shot in the period – they were a perfect seven of seven in the frame. The Gator lead stood at 14 when the halftime buzzer sounded.

The lead continued to grow in the third frame, and it ballooned out to as many as 18 at points during the third period. Arkansas would mount a comeback late, cutting the deficit to eight several times, but would get no closer, as the Gators were able to knock in some free throws late.

Spencer has now gone for 17 or more points in seven straight games.
Amber Ramirez secured the first double-double of her career, going for 10 points and 10 rebounds.
Jersey Wolfenbarger showed her continued progression, going for 15 points and six boards.
Goforth blocked three more shots against UF, her seventh game this season with 3+ blocks.

Arkansas returns to Bud Walton Arena Sunday, where the Hogs will meet Kentucky in the #23For23 game. The game will tip off at 1 p.m. CT, and will air live on SEC Network.