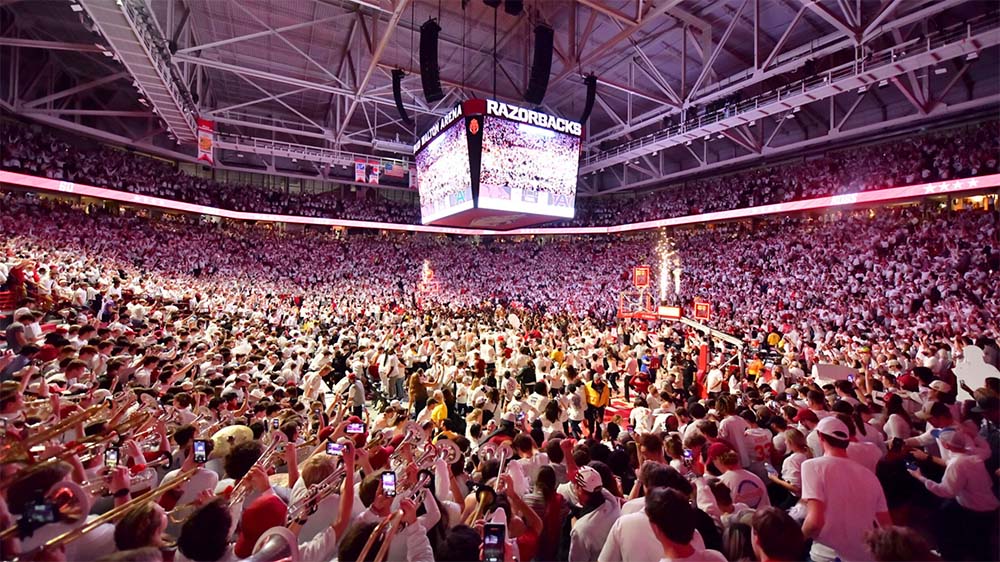 FAYETTEVILLE, Ark. – Down one with 2:39 left in overtime, Jaylin Williams (13 points and 11 rebounds) and JD Notae (28 points, three steals and four blocked shots) made seven straight free throws to give the Razorbacks a lead it would not relinquish as Arkansas upset top-ranked Auburn 80-76 in overtime before a record crowd f 20,327 Tuesday night at Bud Walton Arena.

The win was just the second time Arkansas has ever beaten the #1 team in the land and Arkansas improves to 2-11 all-time in such games. It was also just the third time an opponent came to Fayetteville ranked #1 and it was the first time they had played in Bud Walton Arena.

Auburn battled back as Jabari Smith sank a 3-pointer with 36 ticks left to cut the Tiger deficit to three (76-73). After two free throws by Chris Lykes, Smith drilled another 3-pointer to get the Tigers to within two with 19 seconds remaining. Au’Diese Toney went 1-of-2 at the line but Williams grabbed an offensive rebound on the miss. Notae was fouled with 12 seconds to go for a 4-point Razorback lead. Auburn missed a jumper on the ensuing possession and Williams grabbed the defensive rebound to seal the win.

Overall, Arkansas was 11-of-14 at the free throw line in overtime while Auburn was 0-of-3 at the stripe.

Notae made and attempted career highs at the line (11-of-14) and his four blocked shots are a career high. He added five rebounds, three assists and three steals, including a critical theft with 56 seconds left in regulation.

Williams tallied his sixth double-double (all within the last 10 games) with two assists and two steals. Toney also recorded a double-double with 14 points and 10 rebounds (five offensive). It was his fifth career double-double and second as a Razorback.

Davonte Davis was +15 (the only Razorback in double digits) thanks t 10 points and a career-high five steals.

Arkansas hits the road to face Alabama on Saturday (Feb. 12). Tipoff is set for 11:00 am (CT) and the game will be televised on SEC Network.