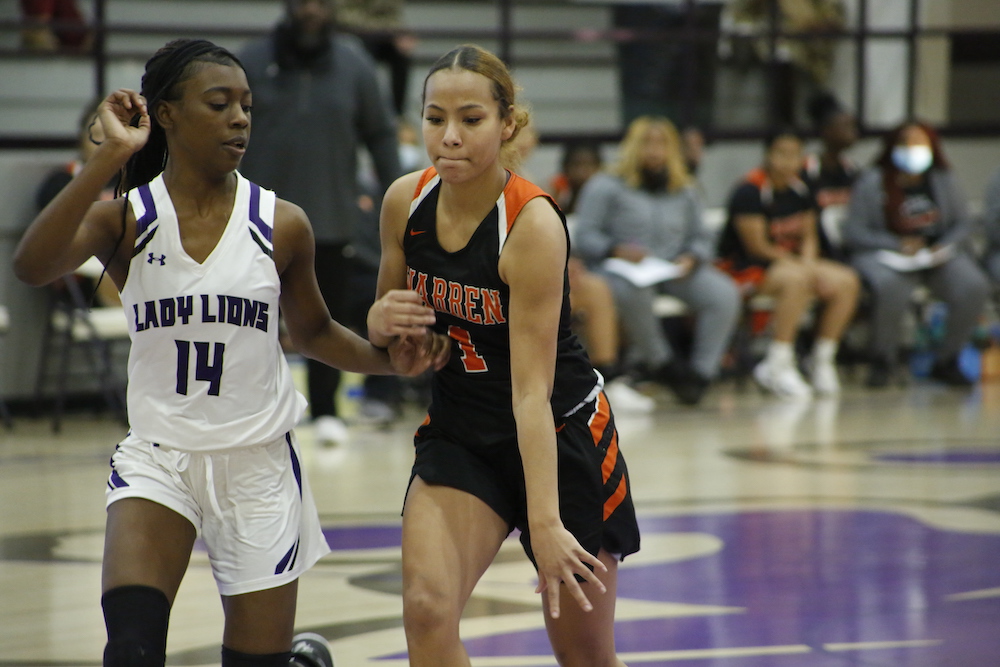 HAMBURG, Ark. – Coming off back-to-back wins over Crossett Saturday and Tuesday, the Warren Lady Jacks dropped a close game Wednesday evening, February 9, 2022 to Ashley County’s other 8-4A school, Hamburg, by the final of 35-26.

While Warren struck first in the opening minutes, Hamburg answered right back. The Lions went on a 9-0 run to end the first quarter. The Lady Jacks struggled to get much going offensively. Tessa Andrus’s early bucket was Warren’s sole points of the first period.

Warren found a bit of rhythm in the second, but still had trouble finding points from the floor. Senior point guard Tyairean Bass picked up Warren’s only field shot of the second. Keller Bigham made it to the line and knocked down four before the half. Hamburg took a 16-9 lead into the midway break.

Coach Leon Harris’s Jacks put together a better offensive display in the third and fourth. They came to within three of Hamburg late, but fell by the final of 35-26.

Senior Lady Jack Keller Bigham posted yet another double figure night, her twenty-first game of the season ascending into double digits. She led Warren with 13 points. Bigham went five for five from the free-throw line. It’s interesting to note that Bigham has not missed a free-throw in fourteen quarters. Her last miss was February 4 vs. Star City in the second quarter.

Tessa Andrus had a solid night for Warren. She posted seven points. Andrus knocked down Warren’s only three-pointer against Hamburg during the third quarter.

Tyairean Bass scored four for the Lady Jacks Wednesday evening. She went two of four from the free-throw line.

Mylesha Yao scored two points against the Lady Lions, going two of four from the line.

The close loss brings Warren’s 8-4A Conference record to 3-8. They are now 8-14 overall. Warren’s Ladies hit the court again Friday with a chance to bounce back vs. Watson Chapel at home at the Seminary Street gym at 5:00 p.m.

Friday is “Orange Out!” night. Fans are encouraged to wear all orange to support the Jacks.

Next week, both Warren senior basketball teams will finish regular season play. Currently on the schedule is a game for both the men and women February 15 at 5:00 p.m. at Monticello, followed by games against Magnolia in Warren February 18 at 6:00 p.m.

Top photo: Mylesha Yao(1) drives into the lane during the first half at Hamburg.