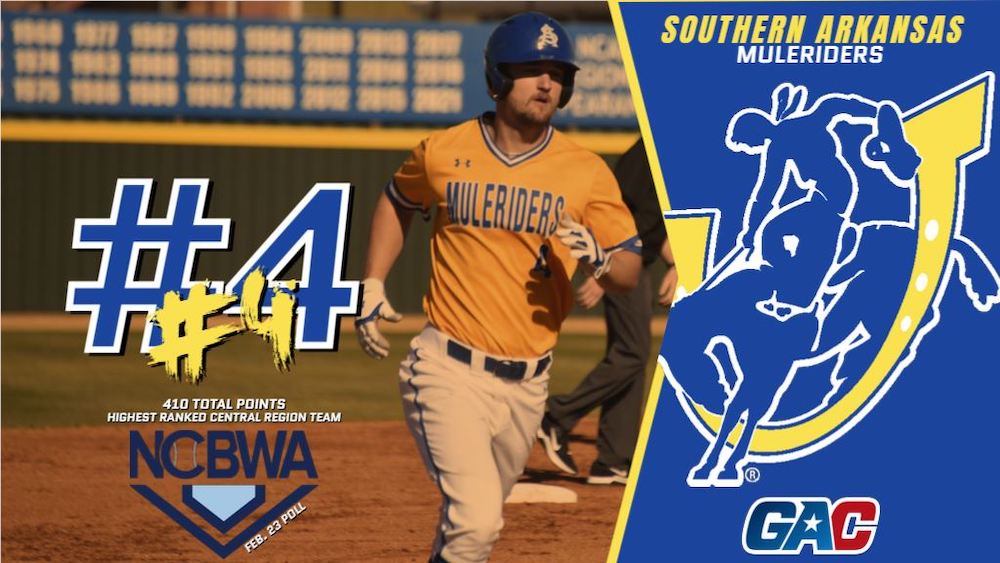 PEMBROKE, N.C. – The National Collegiate Baseball Writers Association announced its second NCAA Division II Top 25 rankings on Wednesday and holding at No. 4 is Southern Arkansas; the top ranked team in the Central Region for the second straight week. Following a 3-0 week, with only one win counting toward the current poll and the other two counting toward next week’s rankings, the Muleriders received five of the nine first-place votes in the Central Region.

In the region rankings, the Muleriders received one more point and one more first-place vote than Henderson State which has won its first 11 games to start the season. The Reddies moved up eight spots and into the national poll’s top 10 at No. 10.

Nationally, Southern Arkansas is joined in the top five by unbeaten Wingate at No. 1, perennial power Tampa at No. 2, and South Central Region power West Texas A&M at No. 3 and West Region leader Point Loma at No. 5.

Southern Arkansas (8-1, 3-0 GAC) enters the second weekend of league play having won its last eight games after dropping its season opener. The Muleriders are coming off of a dominant showing against Northwestern Oklahoma State at home in which SAU outscored the Rangers 34-5, totaled 26 hits with 16 going for extra bases, and also drew 22 walks. SAU surrendered 13 hits with just three for extra bases in 21 innings, walked only five and struck out 29 Ranger batters.

SAU meets Southwestern Oklahoma State in Weatherford in a series that has since twice been moved due to weather. The series opens with a noon doubleheader on Sunday, February 27, while Monday’s finale is scheduled for noon. Live coverage links are available at www.MuleriderAthletics.com.