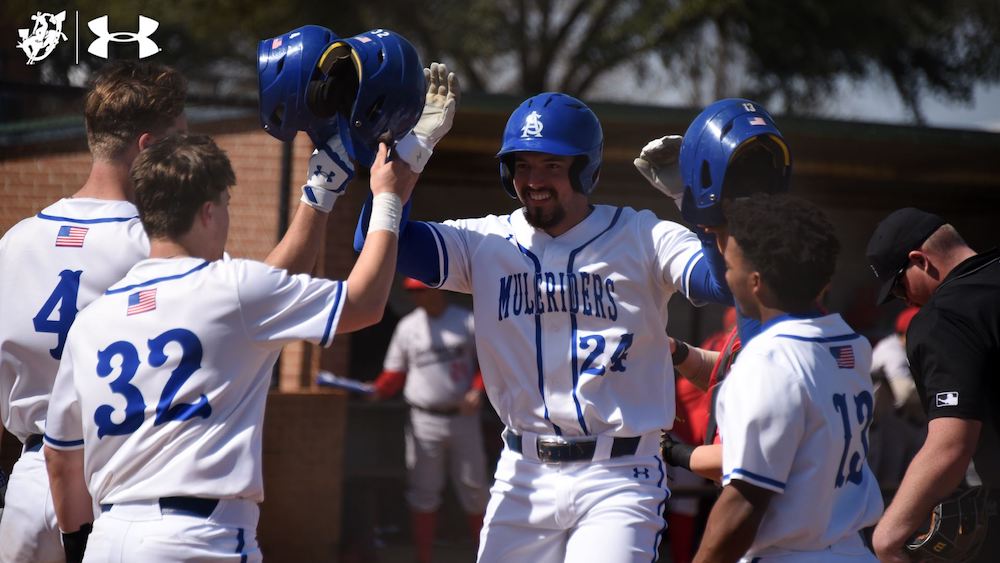 MAGNOLIA, Ark. – The offensive onslaught continued for #4 Southern Arkansas in Sunday’s Great American Conference series finale against Northwestern Oklahoma State as the Muleriders, led by junior Brett McGee’s 3-for-4, five RBI effort, collected 11 hits with seven going for extra bases and received six strong innings from junior Wyatt Marr (W, 3-0) to earn a 13-2 series-sweeping win over the Rangers from Walker Stadium at Goodheart Field. The victory is the eighth straight for the Muleriders and the 13 runs mark the third time in four games and fifth time this season that SAU has reached at least ten runs in a contest.

Southern Arkansas (8-1, 3-0 GAC) tossed the ball to Marr and he delivered. The left-hander allowed only three hits, two walks and his first earned run of the season, while striking out four batters as he faced five over the minimum. He will carry a 0.52 ERA in 17.1 innings pitched into next weekend’s action.

Quick starts were the theme for Southern Arkansas in Saturday’s doubleheader (17 runs combined through first four innings of both games) and it was much of the same for the Muleriders in Sunday’s finale as the club pushed across ten runs through the first four frames of play which was highlighted by a five-run second inning.

The Muleriders put the leadoff batter on in each of the first three innings. Sophomore Chris Sutton doubled down the left field line on the first pitch he saw in the bottom of the first. An infield single by Will Richardson with two outs in the frame chased home Sutton for the game’s first run. In the second, junior Ty Manning doubled into left field to leadoff the inning, advanced to third on a failed pickoff attempt and would score on a two-run single by McGee which preceded a three-run blast by senior Tucker Burton with two outs in the second inning.

Leading 6-0, senior Jacob Martinez tripled to jumpstart the third inning for SAU and Manning followed with a triple to chase home the former, while also scoring in his at bat on a throwing error in an attempt to cut him down at third.

McGee’s big day continued a couple of at bats latter as he doubled home two more runs to put SAU out front 10-0. His fifth RBI came in the fifth as he doubled home Sutton. McGee would score on a fielding error and senior Josh Walker plated freshman Brandon Nicoll on a sacrifice fly to the deepest part of the park.

The Rangers added single runs in the sixth and seventh. Sophomore Jonny Vesevick worked the seventh in relief of Marr and allowed one hit and a run, while fanning two.

Manning and Sutton followed McGee with two hits. Sutton scored all four times (2-for-2, BB, HBP) he touched the base path on Sunday, while Manning and McGee each scored twice. McGee collected two doubles, Sutton hit a double and Manning was responsible for a double and a triple.

For the series, the Muleriders outscored the Rangers 34-5, totaled 26 hits with 16 going for extra bases, and also drew 22 walks. SAU surrendered 13 hits with just three for extra bases in 21 innings, walked only five and struck out 29 Ranger batters.

The Muleriders continue Great American Conference play next weekend as the team’s first 2022 trip to the Sooner State takes them to Weatherford for a three-game series with Southwestern Oklahoma State. The series is currently set for a noon doubleheader on Friday, February 15. Saturday’s finale is scheduled for a 1 p.m. first pitch. Live coverage links are available at www.MuleriderAthletics.com.