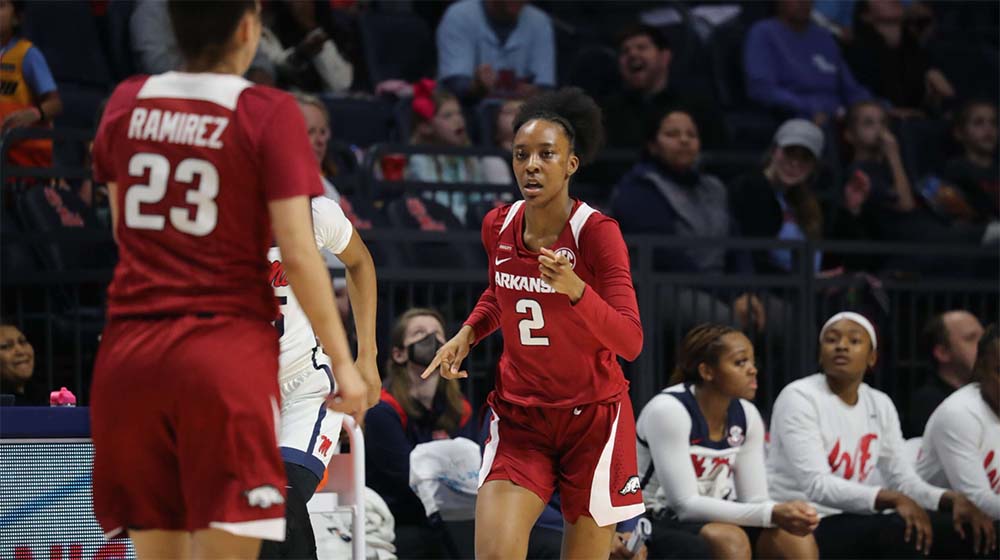 OXFORD, Miss. – Arkansas Women’s Basketball (16-11, 6-8) fell in Tuesday’s makeup game inside the Pavilion, as Ole Miss (21-6, 9-5) defeated the Razorbacks, 70-62. The loss was the third straight for the Razorbacks, their second three-game losing streak of the season. Ole Miss won the battle on the glass, 42-35, and as a result, dominated the second chance points category, outscoring the Hogs 16-5 off offensive rebounds.

Samara Spencer continued to lay the groundwork for her Freshman of the Year bid, leading the Razorbacks with 19 points, six rebounds and five assists. Amber Ramirez scored 15 points in the contest, her 15th straight outing with double-digit points, while Sasha Goforth also cleared double-figures, scoring 13 points of her own.

Arkansas got off to a slow start in the first quarter for the third straight game, and finished the frame trailing 22-15. Shakira Austin led the way in the frame, as she put in seven points and six rebounds, while Madison Scott added five points and four rebounds. Ole Miss and Arkansas would play just about even quarters in the second and third frames, and the lead entering the fourth was nine for the Rebs.

Arkansas was able to cut into the lead in the fourth, trimming the deficit all the way down to three on a layup from Spencer. Makayla Daniels had a chance to tie it on a corner three, but the ball got caught between the rim and backboard, and the possession arrow favored Ole Miss. The Rebels would only go eight of 16 from the free throw line in the fourth, but it was enough to hold off the Razorback rally.

It’ll be another quick turn for the Hogs, as they host Georgia on Thursday at Bud Walton Arena. Tip off is set for 7 p.m. CT, and the game will be streamable on SEC Network+.