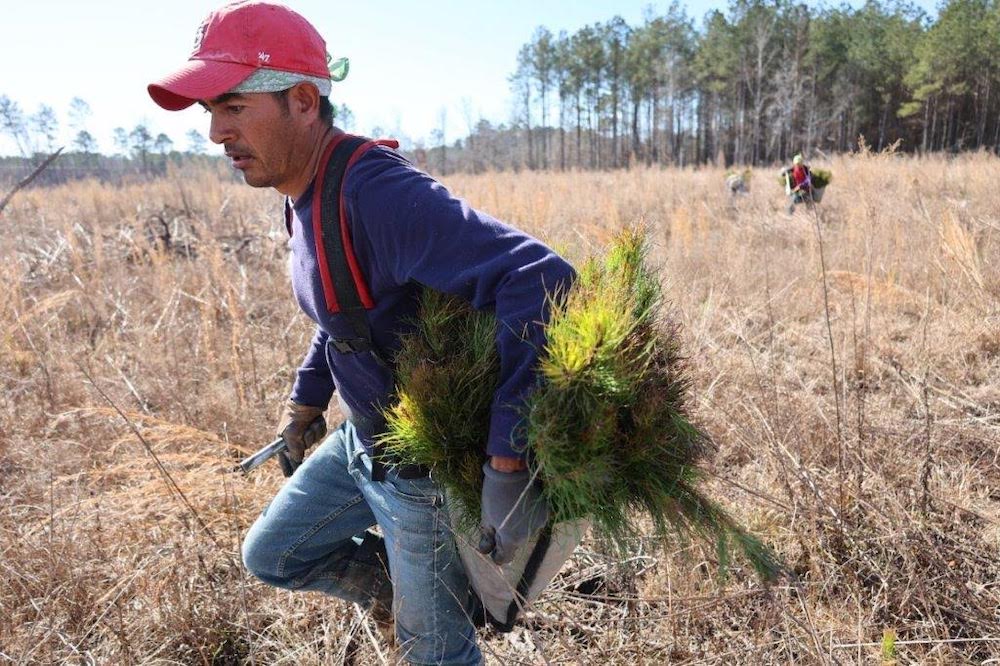 MONTICELLO, Ark.- The University of Arkansas at Monticello replanted it’s 82 acre harvested area of university-owned forest next to the Drew County Fairgrounds. A crew of 10 planted 36,000 seedlings in less than two days. Forest Manager Bobby Webb said the last hand-planted trees on the UAM forest were in 2011.

Director of Communications at UAM’s College of Forestry, Agriculture, and Natural Resources

Growing pine trees in Arkansas is similar to growing corn in Iowa or soybeans in Illinois. Crop seeds are planted, they mature, and they are harvested. Instead of a short growing season during a single summer, a stand of pine trees can take decades. The difference between row crop maturity and forest maturity is time. It takes lots of time, almost 30 years, for a pine seedling to grow to maturity. The loblolly pines planted this month won’t be ready for harvest until 2052. Foresters will thin the trees in about 10-12 years, and again in 17-22 years, to keep the trees healthy and speed their growth.

A professional tree planting crew from Bradly County, Arkansas, arrived on February 10th. Twelve workers knocked out 82 acres of land in about two days. At best, it’s a difficult job, and the forest industry depends on immigrant workers to get this tough job done. Arkansas Center for Forest Business Director Dr. Matthew Pelkki says the tree planters are a key part of the Arkansas Forest Industry. He said a good planter can plant as many as 2000 plants a day by hand. He said, “They are working amazingly hard, and we have great planting crews.”

The University of Arkansas at Monticello, College of Forestry, Agriculture and Natural Resources Dean Michael Blazier teaches a silviculture class. He took his silviculture lab to the tree planting site.

“The professional tree planting is used as a teaching tool,” Blazier said. “The most important thing we do in forest management from a sustainability standpoint is promptly replant after a site has been harvested.”

After watching the pros at work, each student was handed a “dibble,” a specialized spade for planting. They pushed the spade into the soil, inserted the seedling, and then packed it with soil so that oxygen didn’t dry out the planting. The students also doublechecked the spacing of the professional crew, using a pole to ensure 10 feet between trees. “The students will emulate what the planting crews are doing in proper planting techniques.”, said Blazier.

Pelkki says the cost of each seedling is 12-13 cents. The labor cost of planting is about 8 cents per tree paid to the planter. Each planter can do 1500-2000 trees a day. The total cost is $92 acre on 10 X 10-foot spacing. He said, “That calculates to 435 trees per acre which is more than needed for the final harvest. Trees will be thinned in about 10-12 years and again at 17-22 years of age, leaving 70-80 trees left for the final harvest. At final harvest, each tree will bring about 35 to 50 dollars for the 2 tons of merchantable wood in each tree at that time. He says that when all the math and economics are calculated, timber produces about a 12-15 percent return on investment which is better than the stock market.

The soil in the area being planted was “a hard clay pan. It’s really dry, we’re in a drought year. It’s a little harder than normal to plant,” said forestry student Tanner Scott. “It’s not working as well as we would like it to.”

As for spacing, Scott said the professional crew was “spot on. Without using a pole, they are about as close as you can get” to a 10-foot distance.

“They are not going to measure every tree,” Scott said. “If they did it, it would take a week instead of just a couple of days.”

According to Blazier, replanting works best while the weather is still cool, and the seedlings are dormant. Last fall, the College of Forestry, Agriculture and Natural Resources began preparing 85 acres of forestland for replanting. The university hired a helicopter to come in and spray the chemical on the plot to ensure the seedlings had a stronger chance of survival and had a chance to grow above the weeds.

“They told me this morning two days said Forest Manager Bobby Webb. “But now I’m thinking a day and a half at the most. They have gone fast. Webb said afterward; the planter finished the job in about 12 hours. “They make that estimate when they start planting, but they don’t know until they get into the tree stand and walk through to see how bad the briars are.” Webb added, “They were pretty quick, really quick. I checked behind them this morning, and their spacing was good; trees are tight, no air pockets, and no “J” roots.

Forestry student Alexis Mondragon has planted trees before, but that doesn’t make the task any easier.

“I definitely respect the guys who are out here,” he said. “I know it’s a lot of hard work and labor-intensive.”

Mondragon thinks it’s important for the public to understand harvesting and clearcutting.
“I think people look at an area that has been clear cut, and it bothers the public when they don’t know what’s going on,” Mondragon said. “They want to drive down the road and see a pretty forest, but they don’t realize to have that pretty forest, you have to clear cut and replant it to have that look.

“Forest management helps maintain the aesthetics they like,” he said.

Blazier said the field labs are part of the hands-on forest management experience at UAM.

“The purpose of forest management is twofold. We want to provide good habitat within the teaching environment. We also want a good teaching system so students can understand how forests, in this particular case, pine forests, would be managed in real-world conditions.”