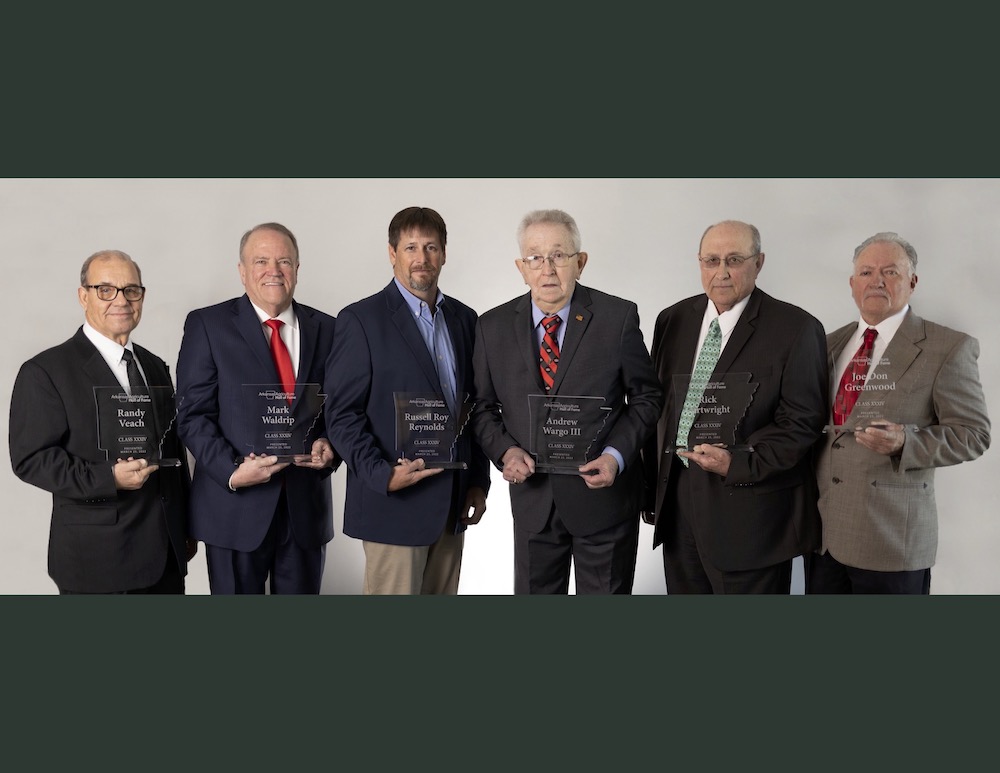 LITTLE ROCK – The Arkansas Agriculture Hall of Fame inducted six individuals today for their leadership and service to the state’s largest business sector.

“When you pull together all parts of agriculture to celebrate our state’s largest industry, and recognize those who have made such a meaningful contribution, it is a special, special day.”
The new selections will bring to 176 the number of honorees in the Arkansas Agriculture Hall of Fame, which began in 1987.

Cartwright joined the University of Arkansas System Division of Agriculture in 1992, earning international recognition as a rice pathologist and serving in various leadership posts. He also served as interim head of the plant pathology department, and more recently has been associate director-Agriculture and Natural Resources before being named interim director of extension in 2016 and senior associate vice president for agriculture-extension for the UA Division of Agriculture in 2017. He retired June 30, 2020.He also spent six years (1978-84) as assistant vice president of the Farm Supply Division for Southern Farmers Association before moving to California to pursue graduate work.

A forest economist by training, Reynolds had the quantitative skills to conduct inventories of standing timber, time-and-motion studies related to logging practices, and the efficacy of using trucks to haul logs to the mill – all new concepts in the early 1930s. He worked closely with the management of the Crossett Lumber Company (and its successor, Georgia-Pacific) from 1933 until his retirement from the Forest Service in 1969.

Randy Veach, Manila Randy Veach exhibited the heart and spirit of a servant leader during his 11 years as president of Arkansas Farm Bureau. He spent a total of 20 years as a member of ArFB’s board of directors, including five years as vice president under friend and mentor Stanley Reed, a Class XXV inductee into the Arkansas Agriculture Hall of Fame. Veach led with an unswerving set of personal priorities: faith, family, farming.

He was also president and chairman of the board of the Southern Farm Bureau Life Insurance Company, the first Arkansan to hold the office. Veach served on the USDA/USTR Agricultural Trade Advisory Committee for Tobacco, Cotton and Peanuts. He is a member of the Arkansas World Trade Center board of advisors and on the Winthrop Rockefeller Institute on Petit Jean Mountain.

Mark Waldrip, Moro Mark Waldrip is a fourth-generation farmer from Moro (Lee County) who built a strong farming operation and created one of the mid-south’s top seed companies.
Waldrip grew up working on his family’s farm and was state president for Arkansas FFA. He studied agriculture economics at the University of Arkansas.Starting with an on-the-farm seed business in 1985, he created and operated East Arkansas Seeds, and expanded the business by purchasing Cullum Seeds, which would eventually become Armor Seed, which grew to cover 25 states and grew from $5 million in sales to over $100 million.

Andrew Wargo III, Watson Andrew Wargo III has spent more than 50 years as farm manager for the Baxter Land Company, where he has helped guide a conservation and stewardship plan that is emulated around the country. He has steered a large row-crop farm, gotten in (and out) of the catfish business and managed the farm’s cotton gin.

Wargo grew up in Little Rock and his parents paid for him to take a private pilot’s course from a flight school in Clarksdale, Miss., the beginning of a successful flying career. He earned a degree in agriculture engineering from Arkansas State University and was a member of the ASU Sport Parachute Team that won the National Collegiate Championships in 1964.