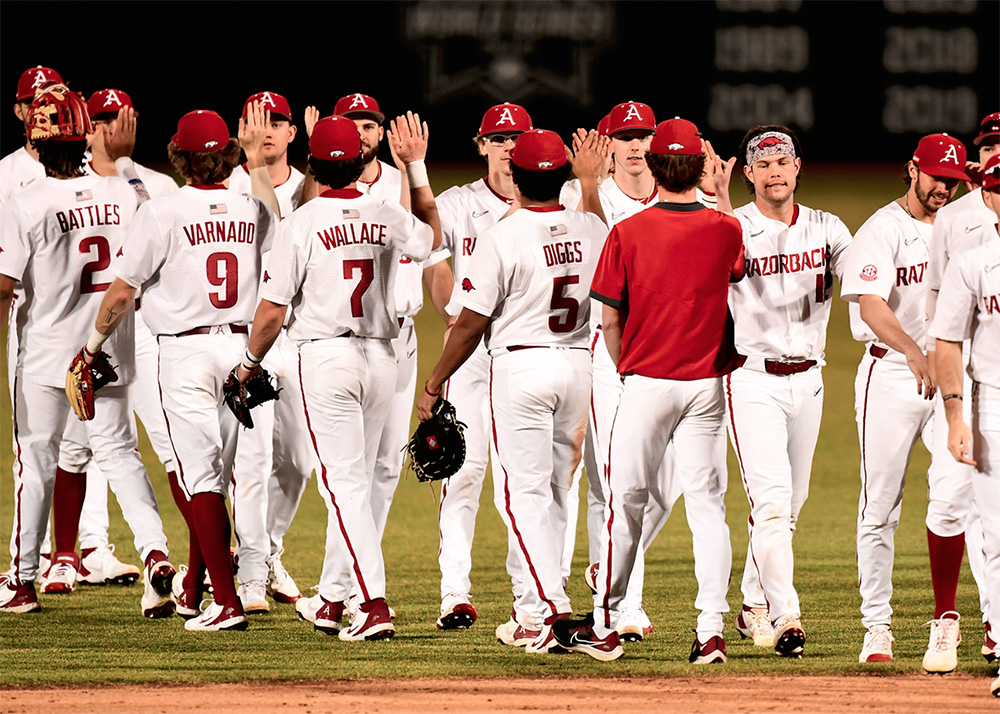 FAYETTEVILLE, Ark. – The Razorbacks’ first midweek matchup of the 2022 season resulted in a win as No. 3 Arkansas handled Omaha, 15-3, on Wednesday night at Baum-Walker Stadium.

The third-ranked Hogs, who have now won nine straight midweek games dating back to last season, improved to 5-2 on the year. Arkansas scored a season-high 15 runs on a season-best 15 hits in the lopsided win.

Arkansas exploded for a combined 12 runs in the fourth and fifth innings, powered by a pair of graduate transfers in Chris Lanzilli and Michael Turner. Lanzilli cracked a two-run double down the left field line in the bottom of the fourth before Turner hit a two-run shot in the fifth. Both Lanzilli and Turner finished the ballgame with three runs batted in.

Brady Slavens and Peyton Stovall also added long balls in the win. Stovall’s 398-foot blast to center was the first of his collegiate career.

There were multiple Razorback debuts on Wednesday night as pitchers Brady Tygart and Nick Moten and utility player Max Soliz Jr. all made their first collegiate appearances. Tygart and Moten both recorded their first strikeouts as they turned in scoreless innings of work out of the bullpen.

Soliz, meanwhile, smoked an RBI double to left center in the bottom of the eighth for his first base knock at Arkansas.

Mark Adamiak made his first career start on the mound, putting together 2 2/3 quality innings of one-run ball. Five Razorback pitchers emerged from the bullpen during the game, combining for one run allowed over 6 1/3 innings.

Evan Taylor was especially good, striking out two in his two perfect innings to earn his first career win.

Arkansas’ 13-game homestand rolls on this weekend with a three-game series against Southeastern. First pitch is set for 3 p.m. Friday, March 4, at Baum-Walker Stadium.