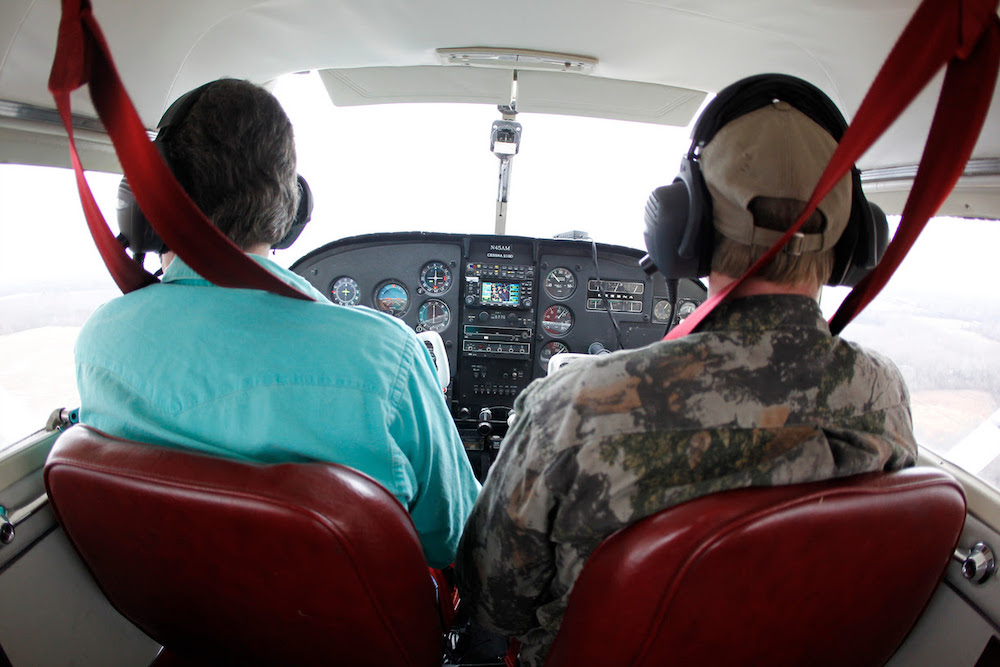 PINE BLUFF, Ark. – Rocky Thornburg has been flying duck surveys long before any of the current Arkansas Game and Fish Commission biologists conducting surveys were on the agency payroll. A pilot based in Pine Bluff, Thornburg began flying low-altitude aerial waterfowl surveys in 1992 to allow AGFC staff to count ducks in the state.

In 2009, when Jason “Buck” Jackson, the AGFC’s wetlands program coordinator, began implementing plans for the AGFC’s moist-soil units to provide habitat for migrating ducks, Thornburg’s work with the AGFC expanded to include aerial applications for the units.

With his three decades of work helping the agency’s efforts to boost waterfowl and wetlands, Thornburg was chosen as the 2021 recipient of the George H. Dunklin Arkansas Waterfowl and Wetland Management Award. He was presented the award by Dunklin at the February Commission meeting in Little Rock. The AGFC Wildlife Management Division administration selected the winner.

“That was an honor there now. Priceless,” Thornburg said earlier this week after a full day of flying in south-central Arkansas. “Buck and Luke (Naylor), they kind of gave me the mushroom treatment. They told me to come to Little Rock for the meeting but wouldn’t tell me what for. That was sure enough a surprise.”

The award is given annually to an individual whose actions – as exemplified by the award’s namesake, former AGFC Commissioner George Dunklin of Arkansas County – have resulted in significant benefit to the state’s waterfowl and wetlands, according to Brad Carner, AGFC Wildlife Division chief. The award was created in 2012, the year Dunklin served his seventh and final year on the Commission. Dunklin has long been a steward of conservation and management of waterfowl and wetland resources while serving in such leadership roles as national president of Ducks Unlimited, as well as a landowner and operator of private and commercial hunting operations.

“Luke hadn’t been there very long and I met George one time with Luke. Luke was flying with me for the surveys then and the weather got bad, so we stopped in Stuttgart to wait for the system to pass and the weather to improve and get something to eat,” Thornburg said. “We went to this Stuttgart restaurant and we ran into him there. Luke introduced me to George.”

They almost crossed paths in recent years, too. A son of a friend of Thornburg’s married Dunklin’s daughter, and Thornburg was in the wedding. “There were way too many people around him at the reception, I didn’t want to bother him,” Thornburg said with a laugh.

Flying in close proximity to the ground does not bother Thornburg, it seems. On Monday of this week, the owner of Rocky’s Aerial Service out of Grider Field in Pine Bluff said he was spraying 10 feet over the ground in the morning and fertilizing from 75 feet up in the afternoon.

For the AGFC’s waterfowl surveys in December and January of each year, he’s flying a Cessna 210 at 500 feet with Jackson or AGFC biologist Alex Zachary in the right seat, counting waterfowl, a bit more distance to air things out than when he started with the cruise surveys in 1992.

“He’s a guy that I will put my life in his hands to fly with,” Jackson said. “I’m looking out the window at the ducks. He’s the one looking dead-ahead in low-level flight … I will not fly without Rocky flying me. Being a cropduster and doing it, if something happens I know he’s going to put us on the ground where we can walk away, I’m sure of that.”

Thornburg’s skill with aerial application fit the bill for the moist-soil unit needs starting in 2009.

“To make the moist-soil program where it’s at, you’ve got to have a good ag pilot,” Jackson said. “I appreciate his ability to adjust his farm jobs to accommodate me. He’ll go to Ed Gordon Point Remove WMA, to Galla Creek, wherever he’s needed.

“On the aerial application side, if I need XYZ sprayed, I’ll tell him and I’m treated like anybody else. So, from a manager standpoint, he treats me like the next farmer, it doesn’t matter.”

Away from the work, Jackson knows of Thornburg as a regular guy who likes to hunt deer and will hunt ducks. But Jackson slyly adds, “He’s getting where he doesn’t like the cold, though.

Thornburg tinkered with flying during his time at Pine Bluff High School before his 1981 graduation, earning his pilot’s license. Flying then was for fun, he said, adding, “I was out of high school a few years before I decided to pursue my aviation career.”

A friend who was already flying for the AGFC recommended Thornburg for the cruise surveys. The way the counts were done then, Thornburg says he even counted birds as he flew at 200 feet above fields and WMAs. Luke Naylor, the waterfowl program coordinator, moved the surveys to a transect-method of counting in 2009, and the altitude picked up to 500 feet.

Thornburg’s long tenure of service to AGFC has meant he’s flown at least six waterfowl program coordinators along with multiple other staff. “Really it’s always been so smooth,” Thornburg said. “There’s just been one time, I wasn’t surveying, but I’d left Pine Bluff to go to Stuttgart to pick up whoever was riding with me; it may have been Buck riding with me. Really early at that point, barely daylight, I had a good strike on the right wing. You just feel a bump. It didn’t affect the flying of the airplane, but it left a dent in the wing. You just have to watch the ones at your level, or the ones that are slightly above you. If I’ve got geese at my altitude or around it, I have to start flying and get up higher.”

His work outside of AGFC is also agri-oriented with crop dusting, along with taking passengers on sight-seeing excursions. “I haven’t done it in quite a while, but I’ll fly people around to take pictures of certain things, like a building from way above, or somebody who wants to go sight-see the river, like before a bass tournament where somebody might want to see what it looks like. I haven’t done any of that in a long time.”