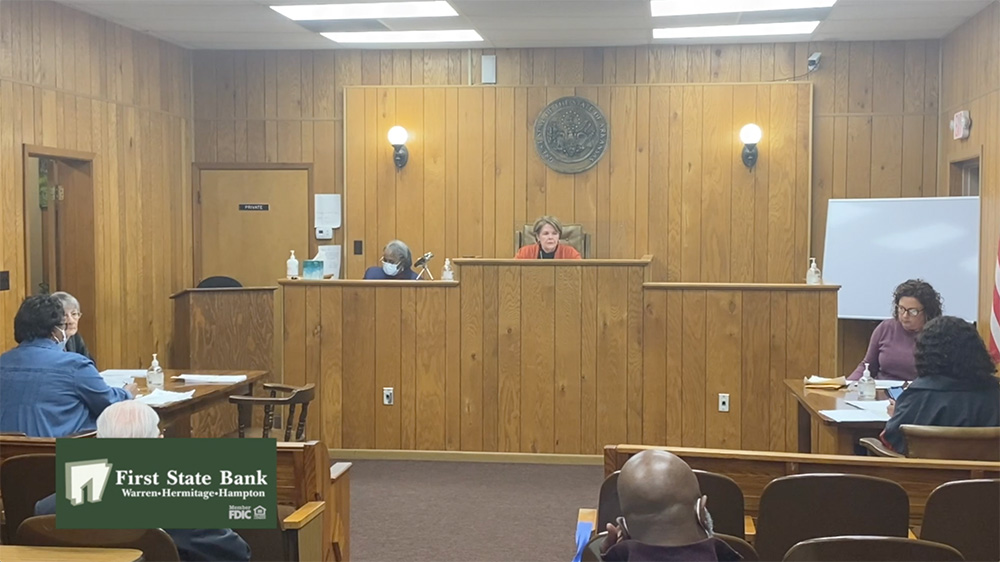 WARREN, Ark. – Warren’s City Council took up a variety of topics for discussion and decisions, including ward redistricting options, an ordinance for Warren’s water and sewer rates, as well as continued discussions in regards to sanitation equipment issues, during the March 14, 2022 City Council meeting.

The Council voted to accept a bid from Eddie Briley and Leslie White for once-a-month power washing of the City sanitation vehicles. Briley and White’s bid was the lowest received by the City from a business that has insurance for the services to be rendered.

In the previous month’s meeting, the Council was presented with three separate options on ward redistricting maps. The issue was tabled in February. When brought up, Alderman Dorothy Henderson stated “I still have questions,” about the redistricting options given.

Option three, which Alderman Memory Burks Frazer asked to confirm if it had the fewest changes of the three provided, was motioned to be accepted.

After it was seconded, Alderman Henderson asked for clarification on the streets which would be taken from Ward 1 and put into Ward 3. Henderson asked if the Mayor was certain that the streets included Croquette, West Church, North Wright, Phillips, West Central, and North Ethridge.

Mayor Denisa Pennington said that was her understanding.

Following further discussion of the issue, including whether or not the racial makeup of the proposed ward changes was certain, Alderman Henderson asked to go on the record with her unreadiness.

“Are we sure this information is correct,” asked Alderman Henderson once more before the vote was taken.

“This is what he(Auddy Doss of EFS GeoTechnologies, the company which designed the proposed changes) sent us, and you know I asked the question you had of the specific streets, and that will be determined more down, whenever it is turned over to the Clerk, the County Clerk,” responded Mayor Pennington.

The motion to accept the third option failed in a vote of 3-2. No votes included Alderman Angela Marshall, Alderman Henderson, and Alderman Zack Burks. Two yes votes were submitted by Alderman Burks Frazer and Emily Moseley.

“We will have to go back to the drawing board,” said Mayor Pennington.

The Council then moved on to approve Ordinance No. 940 concerning sewer rates. A modest increase was approved. There was a public hearing prior to the meeting announcing the ordinance which was highly publicized.

A short discussion was also held about the future of Warren’s Cultural Center. No action was taken.