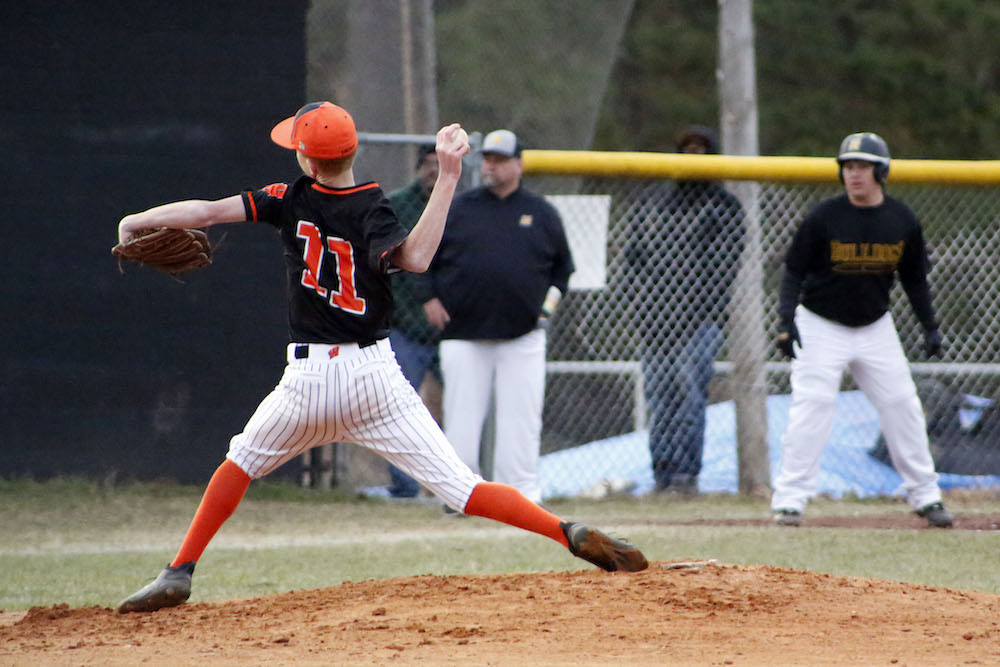 HAMPTON, Ark. – Non-conference county neighbors from Bradley and Calhoun Counties squared off on the baseball diamond Monday evening in the chilly weather in a game that lasted five innings, with the Warren Lumberjacks defeating the Hampton Bulldogs by the final of 17-6 in Hampton.

Hampton sat the Jacks down one-two-three in the top of the first. Freshman Kolby Pope started on the mound for the orange and black. He surrendered three runs in the bottom half of the inning with two runs coming in on a walk and another from a hit batsman.

Warren responded promptly in the top of the second, scoring five runs and taking the lead. One run was scored on a passed ball. Senior Creed Smith delivered an RBI single in the second as well to contribute to the lead. Hampton went scoreless in the bottom of the second.

The Lumberjacks opening up the floodgates in the top of the third. With two outs senior Sam Hollingsworth singled. He would come around to score just moments later. Another Lumberjack run came in courtesy of an RBI single to left from senior Westin Hargrave. Junior Landon Wolfe then knocked an RBI single to left field to extend the Warren lead to 8-3. Two more Lumberjacks scored before the top of the inning ended, including Wolfe.

Sophomore Ervin Rivera made a great running catch in left field in the bottom of the third to help shut down the threat from the home team. Hampton came away empty handed again in the bottom third.

Warren did the same in the top half of the fourth, but Hampton added a run on a hit batsman with the bases loaded in the bottom half of the inning to cut the Jack lead to 8-4.

In the top of the fifth the Lumberjacks looked to find insurance. Landon Wolfe and Triston Woodall got on first and second. Woodall scored moments later on an infield single by Nathan Spears. Two more runs scored on passed balls, and two runs came home on an Ervin Rivera single. Landon Wolfe singled again later in the inning, added another RBI to his tally.

Spears came in to pitch in relief in the bottom of the fifth for Warren. He picked up two outs, but surrendered two runs. Aidan Reynolds finished off the job as Warren won by the ten-run mercy rule after five innings by the final of 17-6.

Kolby Pope picked up the win on the mound for the Jacks. A freshman, this is Pope’s first varsity win.

Warren’s overall record for 2022 is 2-2. Warren also played in Nashville’s Ralph Gross Memorial Tournament over the weekend, falling 8-3 to Prairie Grove and 12-2 to Nashville. The Lumberjacks are scheduled to host Camden Fairview in Warren at 5:00 p.m. Tuesday, March 8, dependent on the weather.

Top photo: Warren freshman Kolby Pope started and picked up the win for Warren on the mound Monday at Hampton. The win is Pope’s first varsity win.