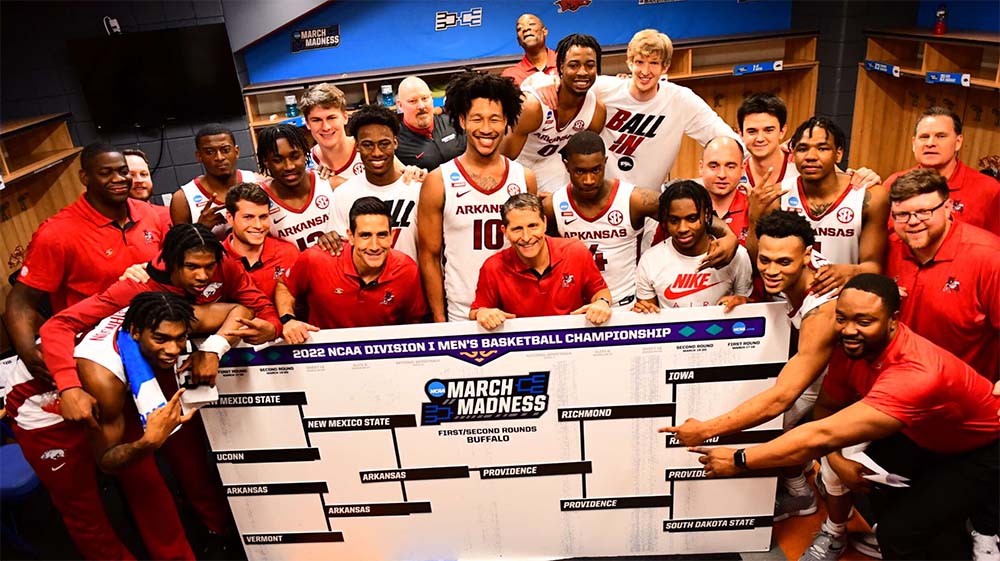 BUFFALO, N.Y. – For the first time since three straight trips to the Sweet 16 from 1993-95, the Arkansas Razorbacks are headed back to the Sweet 16 for the second consecutive season thanks to a hard-fought, 53-48 win over New Mexico State inside KeyBank Center on Saturday night.

The Razorbacks and Aggies put on a defensive clinic with a trip to the Sweet 16 on the line. Both teams struggled to score in the first half until, a 10-0 Arkansas run finally provided some separation. The Hogs held the Aggies to just 24% shooting in the first half, including 2-for-15 from 3-point range. The defense allowed Arkansas to take a nine-point lead into the break, but defense was the theme of the night, including the second half.

New Mexico State battled back to open the second frame, applying defensive clamps of their own and holding Arkansas to just three made field goals over nearly the first 12 minutes of the half. While the Razorbacks were struggling to score, the Aggies chipped away at the lead to finally take their first lead of the night 33-32 with an and-1 from Johnny McCants.

The Razorbacks’ response changed the game for good. Jaylin Williams immediately answered McCants’ three-point play with a pair of free throws to put Arkansas back in front. Two more free throws from JD Notae pushed the lead to three and a 3-pointer from Stanley Umude kept it rolling. Au’Diese Toney’s breakaway dunk capped the 9-0 run and swung momentum the Hogs’ way with 6:06 remaining.

For the second straight game, free throws made the difference down the stretch. Toney’s slam that capped the 9-0 rally would be the last Arkansas field goal of the night, but the Hogs iced it from the charity stripe making 9-of-10, including 4-for-4 from Chris Lykes, to seal the victory.

Notae led all scorers with 18 points while also matching the school record for steals in an NCAA Tournament game with a career-high eight. Williams notched his second double-double in as many games and his 14th of the season with 10 points and an NCAA-Tournament, school record 15 rebounds. Umude added nine points and eight boards.

However, the star of the game was Au’Diese Toney’s defense versus WAC Player of the Year Teddy Allen. Allen entered the game averaging 19.8 ppg and scored 37 in the first-round win over UConn. However, Toney held Allen to just 12 points on 5-of-16 shooting (2-of-6 from deep) with five coming inside the final 1:10 (a 3-pointer at 1:10 and a dunk with two second left).

The Razorbacks advance to the Sweet 16 to take on top-seeded Gonzaga. The Hogs will travel to the West Coast regardless to play inside the Chase Center, the home of the Golden State Warriors, on Thursday, March 24.