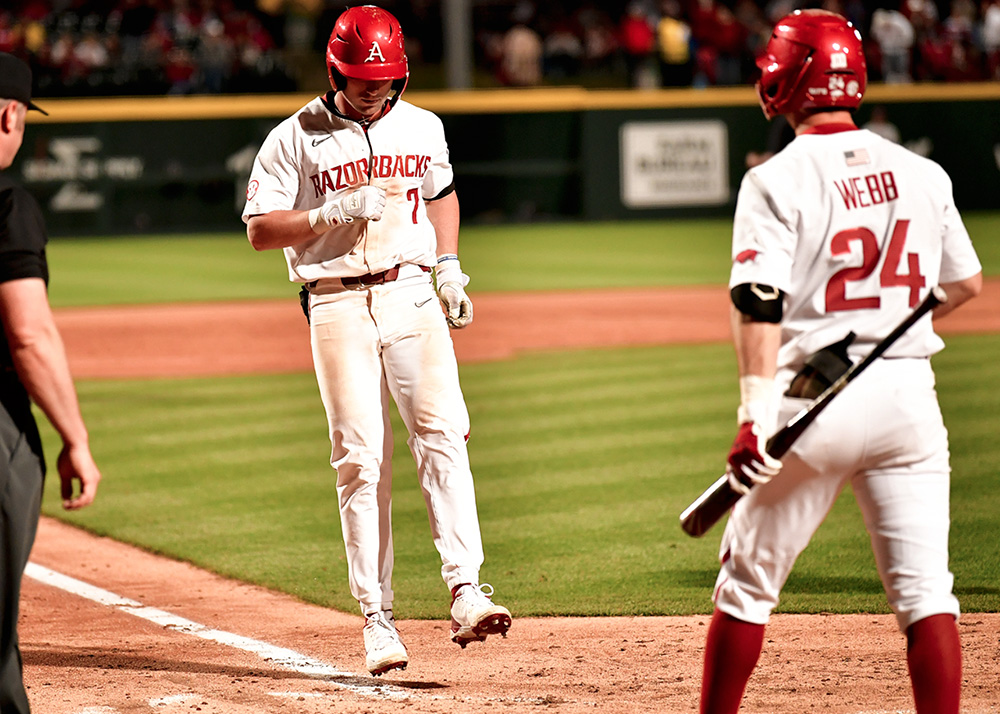 FAYETTEVILLE, Ark. – Trailing by six runs entering the bottom of the third, No. 2 Arkansas blasted its way out of an early hole with three home runs and pulled off an exciting come-from-behind 16-8 win over Little Rock (11-10) on Tuesday night at Baum-Walker Stadium.

It was Arkansas’ 12th consecutive win at home as the Hogs improved to 19-4 overall on the year.

Little Rock was all over Arkansas from the start, getting to Razorback starter Mark Adamiak for four runs in the top of the first. Runs in the second and third innings extended the Trojan lead to six, which matched the Hogs’ largest deficit of the season.

Arkansas began to show signs of life in the bottom half of the third, putting two runs up on the board after Robert Moore’s RBI double and Chris Lanzilli’s run-scoring single. Little Rock pushed its lead to five in the top of the fifth, but what came next was an offense barrage by the Razorbacks.

A five-run sixth inning started with Cayden Wallace’s leadoff home run to right center. Jalen Battles’ RBI single with the bases loaded set the table for Drake Varando’s game-tying single as the true freshman evened the ballgame at seven apiece with two outs in the frame.

Arkansas scored another four runs in the very next inning, opening an 11-7 lead to take control of the game. A four-run advantage would increase to nine in the eighth after Kendall Diggs and Braydon Webb each hit home runs.

Diggs’ first collegiate round-tripper was a three-run shot to the opposite field, while Webb’s tater was his team-leading fifth of the season. Diggs, a true freshman from Olathe, Kan., finished the night with a team-high four RBI.

The Razorback pitching staff struck out 16 batters, one shy of matching its season high. Miller Pleimann, who was the first man out of the bullpen in relief of Adamiak, led the way with five strikeouts in 2 1/3 innings.

Kole Ramage and Evan Taylor, who earned the win, each fanned a pair in their two innings of work. Gabriel Starks and Zebulon Vermillion, meanwhile, struck out the side in their respective one-inning appearances.