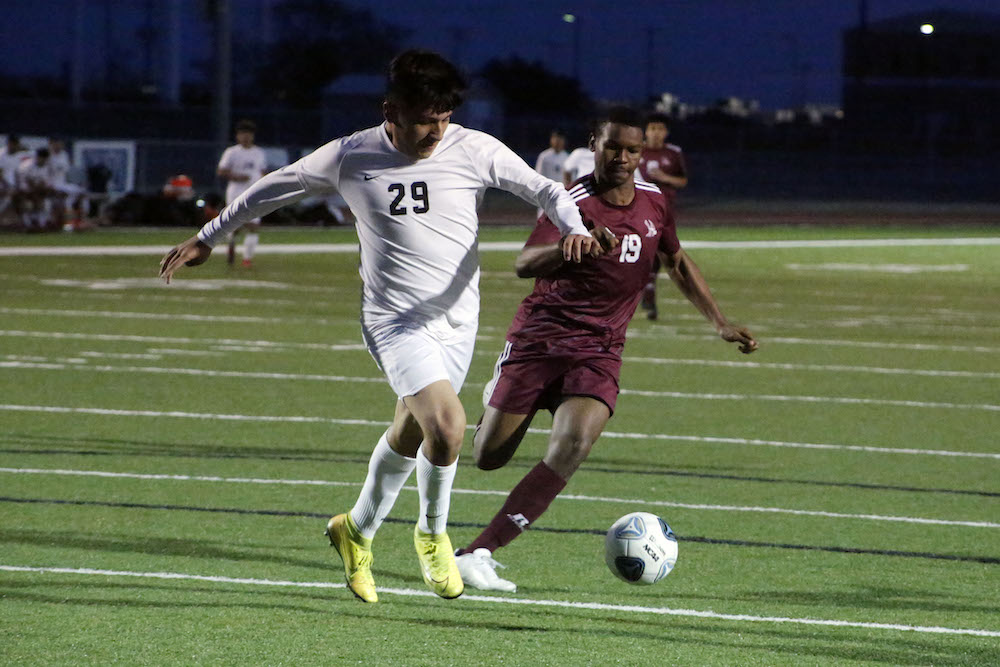 STUTTGART, Ark. – The Warren Lumberjack Soccer Club delivered a magnificent performance Thursday evening, March 17, 2022, beating Stuttgart on the road to pick up the Jacks’ first 4A East Conference win of the season in a goal-packed match by the final score of 8-1.

Coming off the back of a 2-1 Tomato Derby win over Hermitage March 10, Warren looked to keep the momentum going with a big conference opening road test against the Ricebirds, a program that has presented some competition to the orange and black throughout parts of the last decade since the program’s establishment in the Spring of 2012.

Stuttgart gave Warren a scare in the opening minutes. The Ricebirds broke down the left wing, getting behind Warren’s defense out wide. They cut a ball back inside where the striker side-footed a shot into the back of the net. However the flag was up for offside and the goal didn’t stand.

Aaron Romero tested Stuttgart’s keeper just four minutes later with a chance of his own, but the hard shot was right at the goalie, who parried it out of danger. Left winger Jose Garcia would get a similar chance a minute later for Warren, but he dragged the shot just wide right from fifteen yards out. The angle was not in his favor.

Warren’s press high up the pitch paid off in the eleventh minute. Sophomore striker Alann Juarez played an insightful through-ball down the left wing to Garcia, who fought off the Stuttgart right back and blasted a low shot that beat the outstretched left hand of the keeper, gliding just inside the right post to give Warren the 1-0 lead.

Juarez’s assist would be far from his last contribution. Just one-minute after Garcia’s goal, he pinpointed a very similar effort that beat the keeper again to the right corner. The keeper may have gotten a touch on the ball, but Juarez’s shot carried enough pace that the goal keeper never had a chance. Warren led 2-0.

Credit to the Ricebirds, they pulled one back in the fourteenth minute with a shot that looped into the right side of Warren’s net to cut the score to 2-1 Jacks.

However, the orange and black wasted little time and once again applying the pressure up the pitch. Just a minute after Stuttgart’s goal, Garcia found a half chance from about 20 yards out. His curling effort was saved. The Lumberjacks looked confident that they were far from done in the final third.

In the twentieth minute freshman Oliver Chavez-Mata reestablished the two-goal lead for Warren. Finding himself free in the central part of the pitch near the edge of the penalty box, he hammered another low shot into the bottom right corner to give the Jacks a 3-1 lead.

Alann Juarez put Warren’s grip on the game on full-twist just two minutes later. Stuttgart made a mistake at the back, misjudging a bounce. The ball fell Juarez who was already giving the Ricebird back four a headache. He again went low and right, picking up his second goal of the game and extending Warren’s lead to 4-1.

Juarez came close to getting his hat-trick ten minutes afterwards, but the Stuttgart keeper made a terrific save, knocking down a powerful shot from the Lumberjack Sophomore.

Five minutes before the halftime whistle, Juarez got another chance from just inside the penalty box down the left wing from a ball-over the top on a throw in. He fired it past the keeper to complete the hat-trick and give Warren a sound 5-1 advantage.

Stuttgart had one more chance prior to the break, but Jack keeper John Hill was up to the task, denying the Ricebirds any hope going into the second half.

If Hill’s save wasn’t enough, Aaron Romero dealt the second blow in a one-two punch. In the fortieth minute he hit a darting shot that again found the right corner. Warren led 6-1 at half.

Just three minutes after play resumed, Cristian Sandoval slotted a shot to the right of the keeper to give the Jacks a 7-1 lead. At that point the half was reduced in minutes due to the sportsmanship rule.

Warren added one more goal late, as Daniel Sosa faded a looping shot over the Ricebird keeper into the far left corner of the goal. The Lumberjacks went on to defeat Stuttgart 8-1.

Warren’s moves to 4-2 on the year. However the Jacks get a great jump on 4A East Conference play, no with a 1-0 record.

Head Coach Cody Jones’s Jacks now get a week off due to Spring Break. They will next host the E-Stem High Mets of Little Rock, Tuesday, March 29. Kickoff is set for 7:00 p.m. following the Lady Jack match just prior.