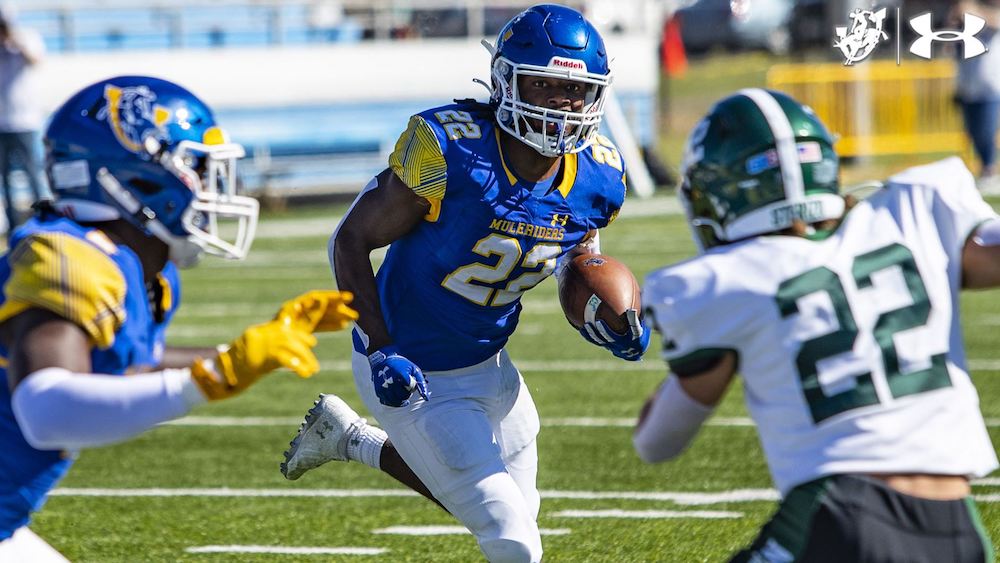 MAGNOLIA, Ark. – The 2022 schedule for Southern Arkansas Football has been released and highlighting the 11-game regular season docket under first-year head coach Brad Smiley are four home games inside Wilkins Stadium at Rip Powell Field as well as the program’s 11th appearance all-time in the Murphy USA Classic.

The Brad Smiley Era of Southern Arkansas Football opens up at home on Thursday, September 1 in Magnolia as the Muleriders will play host to Northwestern Oklahoma State in a 6 p.m. kickoff. SAU is 7-1 all-time against the Rangers in Great American Conference play and has not lost at home to NWOSU in its three previous meetings as league foes.

SAU will hit the road for its next two games as its first trip into the Sooner State for the ’22 season takes the squad to Weatherford for a 6 p.m. start against Southwestern Oklahoma State on September 10. The Muleriders have lost just once in ten meetings to the Bulldogs since 2011; a tight 27-24 decision in Weatherford during the 2014 season.

Seven days later, the Muleriders will travel to Searcy for the first in-state battle of the campaign as nationally-prominent Harding awaits on September 17 at 6 p.m. SAU has lost two straight to the Bisons, but won in its last trip to central Arkansas back in 2018; the program’s first road victory over Harding since the 2003 season.

Week 4 of the season brings the Muleriders back home to face Henderson State in a 6 p.m. bout on Family Day. It will be the first matchup between SAU and HSU in Magnolia since the 2012 season. The following Saturday on October 1, the Muleriders will welcome in East Central for the University’s 106th Homecoming. The week-long festivities will be capped off in a 2:30 p.m. kickoff and prior to the start of the Week 5 affair, the 2022 SAU Homecoming Court will be presented along with the announcement of the 2022 SAU Homecoming King and Queen. Halftime events will include the public introduction of the 19th class of the SAU Sports Hall of Fame. SAU saw a five-game win streak snapped against the Tigers last season in Ada.

Mulerider fans will have to keep the car gassed up and the Rand McNally handy for the final four weekends in October as SAU will not play at Wilkins Stadium until a 2 p.m. Senior Day kickoff against Southern Nazarene on November 5 in what will serve as the final home game of the regular season.

An October 8 matchup takes SAU to Durant to meet Southeastern Oklahoma State in a scheduled 2 p.m. start. Since first meeting as GAC opponents in 2011, the series is deadlocked at 5-5 with the Savage Storm having won two of the past three meetings and three-straight in Durant. Week 7 of the 2022 season sends the Muleriders to Russellville to face Arkansas Tech in a 2 p.m. kickoff on October 15. The Muleriders won in El Dorado in ’21, on the road at Tech in ’19 and at home in Magnolia in ’18. Since 1970, SAU holds a 27-21-1 lead in the all-time series.

For the 11th time all-time and for the eight-consecutive season, the Muleriders will make the familiar 38-mile trip across county lines and into El Dorado for the 13th playing of the Murphy USA Classic where league powerhouse Ouachita readies in a 2 p.m. start on October 22. SAU is 4-6 all-time in the MUSAC and is 1-2 against the Tigers in El Dorado since the first playing of the game in the south Arkansas boomtown back in 2009. SAU earned a 32-28 victory in 2015, was edged 45-42 in 2017 and dropped a 2019 decision 38-21.

SAU’s final swing into Oklahoma comes in Week 9 at Oklahoma Baptist. The Muleriders lost a shootout with the Bison in Magnolia during the 2021 season falling 44-40. It was the first win for OBU in a short series that dates back to 2015.
Following the aforementioned Senior Day kickoff against SNU on November 5, the Muleriders will matchup with Arkansas-Monticello in the Battle of the Timberlands on November 12 in Drew County. The two longtime bitter south Arkansas rivals have met in the final weekend of the regular season every year since the 2013 campaign. Southern Arkansas will meet UAM for the 97th time in a series that dates back to 1913. Since 2011, SAU holds an 8-2 series lead, but UAM has won two of the past three: a 20-17 win in Monticello to close out the 2018 season and end the Muleriders’ chances at making the NCAA postseason and a 36-point victory in a 73-37 blowout in Magnolia to conclude the 2021 season.

Tickets for the four SAU home games will be made available later this coming summer. More information on the Murphy USA Classic will be announced at a later date.