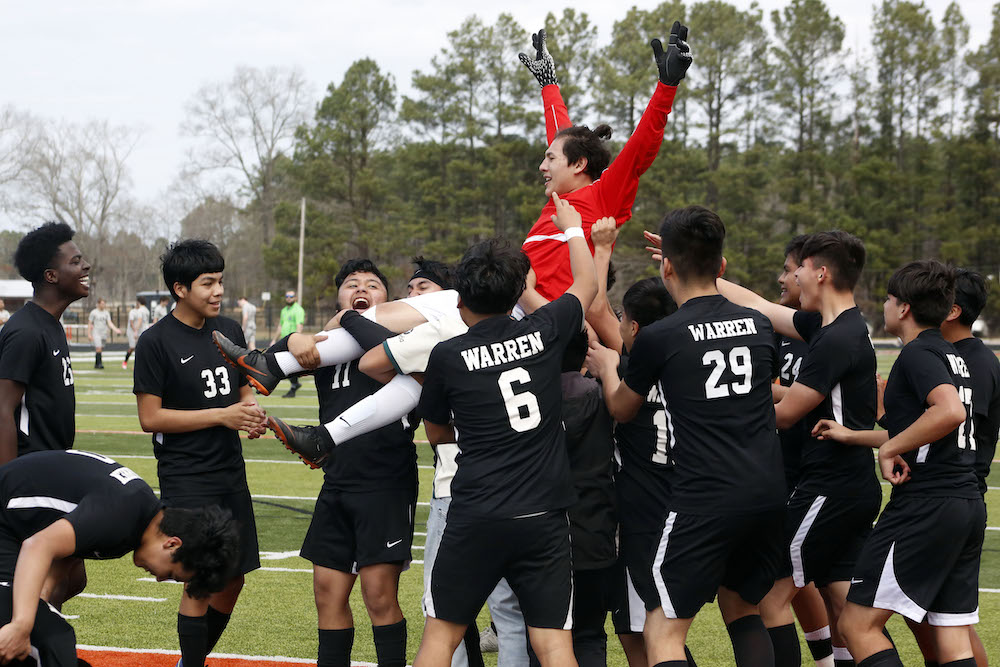 Be sure to read further down, as there are two separate game reports.

The Jacks looked to even things up on the year with opponent White Hall, after dropping a match Tuesday to the Bulldogs by the final of 2-0.

Once again in the jamboree format, each half was cut to thirty minutes.

Warren threatened in the tenth minute from a forty-yard free kick, but White Hall’s keeper was up to the task. Another chance came in the twenty-second minute for the orange and black. A ball crossed in from the right wing just needed a gentle touch, but nobody was able to get on the end of it, and the score remained 0-0.

White Hall created their first and biggest chance of the first half in the last second of play. A Bulldog striker broke through clear with just Warren’s keeper John Hill to beat. Hill however was Johnny-on-the-spot, pushing the shot clear and keeping things knotted at 0-0 at the halftime break.

Sophomore striker Alann Juarez launched a blast effort from just outside of the penalty box in the thirty-fourth minute. The shot sailed just a bit high.

Jack keeper John Hill came up big again to keep things all square in the thirty-ninth minute. However, the deadlock was broken just a minute later. White Hall pushed men forward with a corner kick conceded by Warren. The ball into the box was unable to be cleared. The loose ball in the box was just the half chance White Hall needed to slot a shot into the far post corner. The Bulldogs led 1-0.

Alann Juarez nearly leveled things in the forty-eighth minute. He took a free kick from around thirty-yards out, but the White Hall keeper made a superb save.

Warren’s Jose Garcia kept the pressure up on the Bulldogs. He tested the keeper in the fiftieth minute with a shot left of the goal keeper, though it was saved again.

In the fifty-second minute minute Warren’s central attacking midfielder, senior Hector Torres, picked up possession in the final third of the pitch, and cannoned a shot into the right side of the net. The White Hall keeper never had a chance.

Torres nearly gave Warren the lead in the fifty-seventh minute with an effort that was just saved on the keeper’s near-side post. At the final whistle things were all tied up at 1-1, so the match went to be settled by penalty kicks.

Torres stepped forward to take the first kick for Warren. He confidently buried the shot.

White Hall matched the penalty to even things out once again.

Alann Juarez’s next penalty for Warren bulged the back of the net, still rising as it went in.

The Bulldog’s next taker however evened the shootout at 2-2.

White Hall’s next kicker equaled the penalties at 3-3.

Oliver Chavez stepped up next for the Jacks, but his shot hit the post.

With a chance to take the lead with just one Warren penalty taker to go, White Hall’s next shot was denied by Warren goalkeeper John Hill. The save kept Warren’s hope all the more alive.

Warren’s final shooter was Cristian Sandoval. Sandoval calmly put the ball in the back of the net.

White Hall had to make the fifth penalty kick to keep the match alive for the Bulldogs. However, Warren’s Hill palmed the ball away. The Lumberjacks won 4-3 on penalties and stormed the pitch. Keeper John Hill was lifted and tossed by his teammates in celebration, as Warren recorded its first win of the 2022 season.

Warren’s men were right back in action immediately following their penalty kick win with a game against Lakeside of Lake Village in game two of the day.

The Jacks scored just six minutes in. Jose Garcia volleyed a shot from near the edge of the penalty box. It hit the back of the net to give Warren a 1-0 lead.

Senior Hector Torres doubled Warren’s lead in the eleventh minute with a driven shot from fifteen yards flying past the Lakeside keeper into the left corner of the goal.

The Jacks added another just seconds later from a free kick which Lakeside’s keeper misjudged. The Jacks led 3-0.

Both Alann Juarez and Aaron Romero created a couple of chances in the thirteenth minute. Juarez’s shot was saved and Romero’s was just wide left of goal.

After the break, Miguel Mendoza picked up a rebound near the box and knocked home a shot to give the Jacks a 4-0 lead.

Hector Torres gave Warren’s their final goal of the match in the fifty-second minute, curling a shot from the left side into the right corner.

Lakeside took Warren’s clean sheet opportunity away in the fifty-seventh minute with a low shot sneaking in, but the match was well and truly done at that point.

Warren won 5-1 at full-time. The Lumberjacks move to 2-2 on the year after both of Saturday’s wins. They will next travel Monday, March 7 to turn around and face Lakeside again on the road, at Lake Village. That match is scheduled to begin at 7:00 p.m.